The premier said Japan will work closely with the United States and other nations after Russia launched what Ukraine called "a full-scale invasion" following Moscow's announcement it would carry out a "special military operation" in eastern Ukraine known as the Donbas, where two pro-Russia separatist regions are located.

"The Russian attack shakes the foundation of international order that never tolerates unilateral change to the status quo by force, and we strongly condemn Russia," Kishida told reporters. 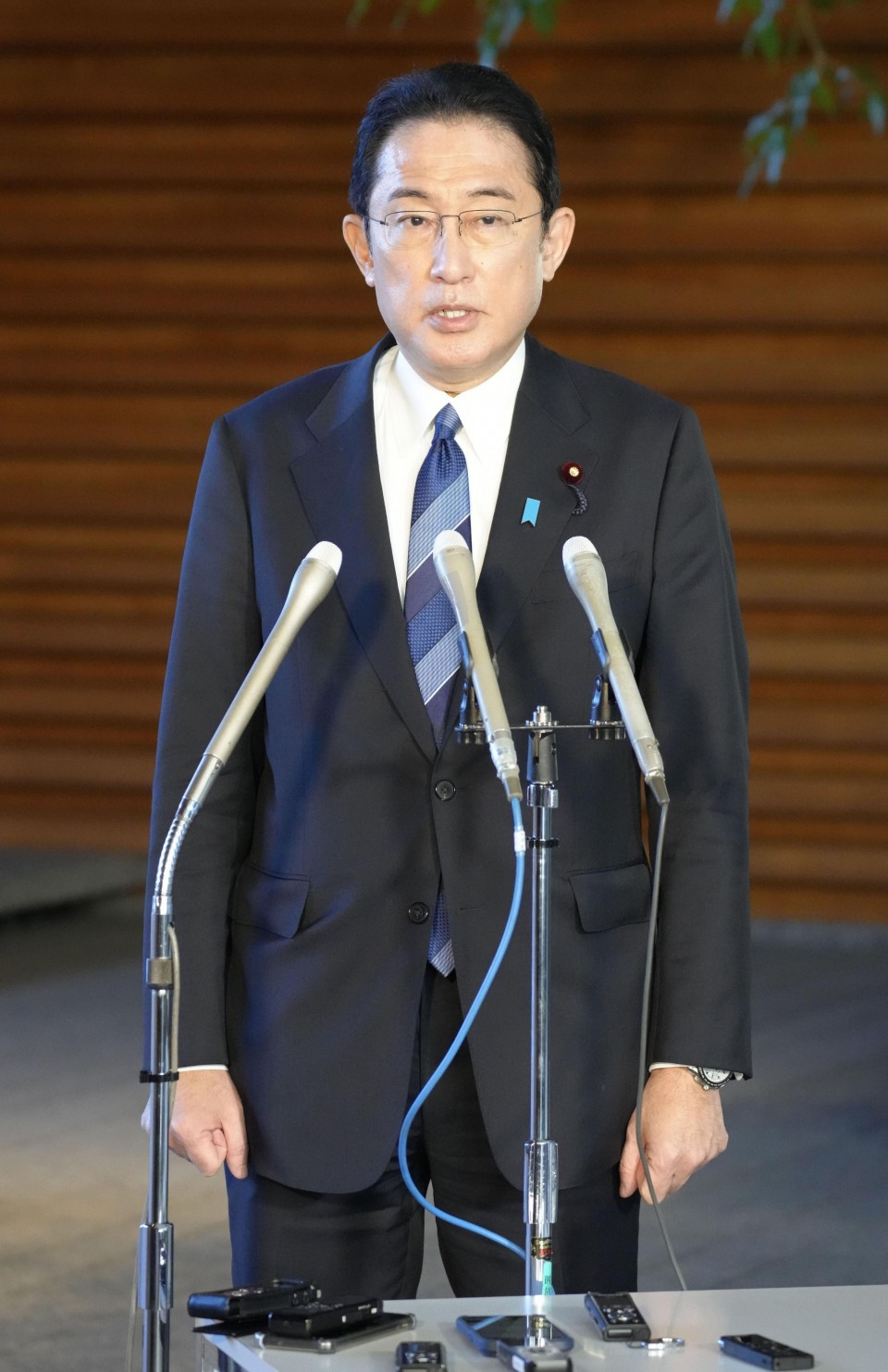 "We will never tolerate unilateral change to the status quo by force, so we strongly condemn this invasion," Hayashi told Galuzin at the beginning of their meeting, which was open to the media.

The envoy responded by saying that a Russian invasion has not occurred.

Tensions over Ukraine have heightened after Russian President Vladimir Putin formally recognized the Donetsk and Luhansk regions as independent and ordered the deployment of troops to "maintain peace" there despite global calls for Russia not to take military action against Ukraine.

Kishida earlier told reporters that securing the safety of Japanese nationals in Ukraine is a "very important issue," and the government will take necessary steps.

There were about 120 Japanese nationals in Ukraine as of Monday, according to the government.

The attack came a day after Japan announced the imposition of economic sanctions on Russia and the two pro-Russian separatist regions, denouncing Moscow's recognition of the two regions' independence and order to deploy troops there as a violation of the sovereignty and territorial integrity of Ukraine and international law.

"We will swiftly work to take further measures (against Russia) while coordinating with the international community in accordance with the change of the situation," Kishida said during a House of Councillors Budget Committee meeting.

Japan has been involved in a decades-old territorial dispute with Russia over a group of islets off Hokkaido, which has apparently put Tokyo in a difficult position in determining how tough its sanctions should be.

The sanctions announced Wednesday included suspending visa issuance for officials from Donetsk and Luhansk, the freezing of their assets and a ban on exports to and imports from the two regions, also known as the Donbas.

The issuance and trading of new Russian sovereign bonds in Japan were also banned.

The sanctions were similar to those announced Tuesday by the United States. The European Union and countries, including Australia and Britain, have also decided to impose economic sanctions.

The Japanese government is considering a partial release of oil reserves together with the United States and other countries to curb the sharp rise in crude oil prices in case the conflict intensifies with Russia, one of the world's major oil suppliers, according to sources close to the matter.

Chief Cabinet Secretary Hirokazu Matsuno said at a regular news conference that Japan has "enough reserves," addressing concerns over energy supplies. The government will closely monitor the Ukraine crisis to assess the impact on the Japanese economy, he said.

Japan had some 240 days' worth of oil in private and state reserves as of the end of last year, according to the industry ministry.

Japan has already decided to divert part of its liquefied natural gas imports to Europe, which is facing the threat of supply disruptions given its high reliance on Russia.

The leaders of the G-7 -- Britain, Canada, France, Germany, Italy, Japan and the United States, plus the European Union -- are scheduled to hold a virtual meeting later Thursday to discuss the Ukraine crisis.