Japan will implement a set of economic sanctions against Russia and two pro-Russian separatist regions in eastern Ukraine after Moscow formally recognized the areas and ordered the deployment of troops there, Prime Minister Fumio Kishida said Wednesday.

The government will suspend visa issuance for officials from the two regions and freeze their assets. It will ban exports to and imports from the self-proclaimed republics of Donetsk and Luhansk as well as the issuance and trading of new Russian sovereign bonds in Japan, Kishida said.

Japan has condemned the latest Russian move as a violation of the sovereignty and territorial integrity of Ukraine and international law. Kishida had stressed the importance of close coordination with other members of the Group of Seven nations in taking a "tough" approach to Russia. 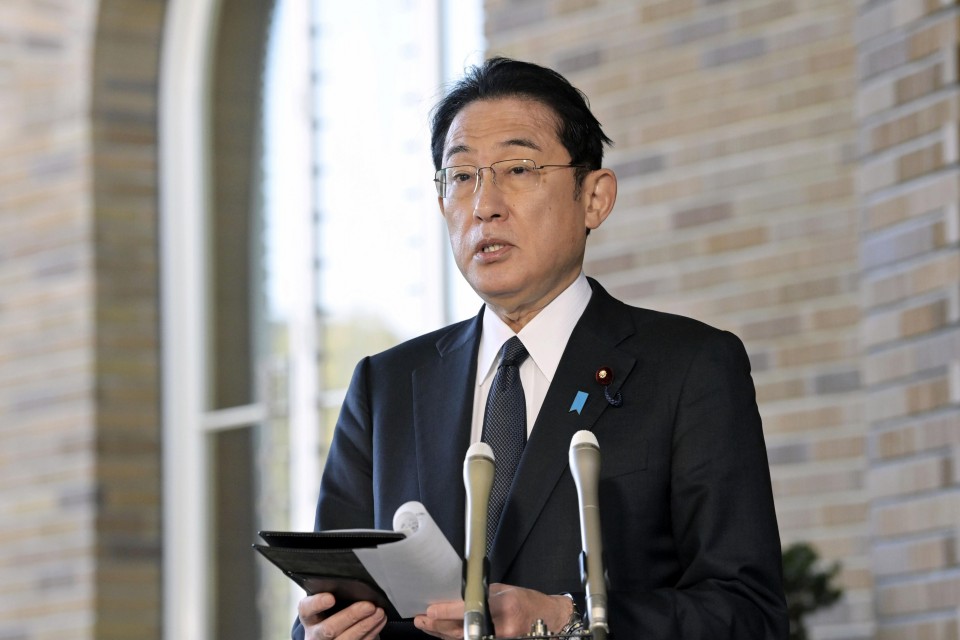 Japanese Prime Minister Fumio Kishida announces sanctions to be implemented against Russia at his official residence in Tokyo on Feb. 23, 2022. (Pool photo)(Kyodo)

The sanctions are similar to those announced Tuesday by the United States, in what President Joe Biden called a "first tranche." Australia, Britain, Canada and the European Union also decided to impose economic sanctions.

"We strongly urge Russia to return to efforts to break the impasse through a diplomatic process," Kishida told reporters Wednesday morning.

Russia has so far defied calls from the G-7 to defuse the tensions sparked by its buildup of military forces near Ukraine's borders.

Tensions have spiked since Russia recognized the Donetsk and Luhansk regions as independent and ordered the deployment of troops to maintain peace there. Biden has described the situation as the "beginning of a Russian invasion of Ukraine."

"The situation is becoming all the more tense," Kishida said, adding that Japan will take additional steps swiftly in coordination with the G-7 and other nations if the crisis deepens.

The Japanese government has set up a liaison office in the western Ukraine city of Lviv and arranged charter flights to help Japanese nationals leave the country. Kishida said Japan will use all possible means to protect its citizens.

The leaders of the G-7 -- Britain, Canada, France, Germany, Italy, Japan and the United States, plus the European Union -- will hold a virtual meeting on Thursday to discuss the Ukrainian situation.

A decades-old territorial dispute with Russia over a group of islets off Hokkaido in northern Japan has apparently put Tokyo in a difficult position in determining how tough its sanctions should be.

"It is the best Japan can do at the moment," a government official said, referring to its decision on the sanctions.

Japan imposed sanctions against Russia following the 2014 annexation of Crimea in concert with the United States and Europe, though critics questioned the effectiveness of its response. 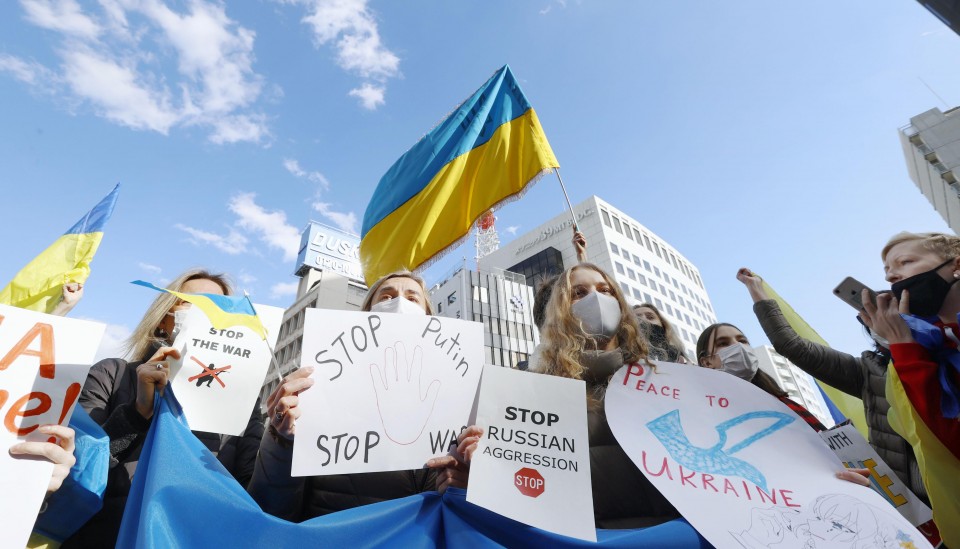 People from Ukraine stage a protest rally near the Russian Embassy in Tokyo on Feb. 23, 2022, following Moscow's recognition of two pro-Russian separatist regions in eastern Ukraine and an order of troop deployments there. (Kyodo) ==Kyodo

On Wednesday, some Ukrainians living in Japan staged a demonstration in front of the Russian Embassy in Tokyo urging the Kremlin to stop taking military action and calling for the international community to support their home country.

The Ukraine crisis has also rattled financial markets, sending share prices lower and crude oil prices sharply higher, as Russia is one of the world's major oil suppliers. Japan has decided to divert part of its liquefied natural gas imports to Europe, which is facing the threat of supply disruptions given its high reliance on Russia.

"The current situation will not have an immediate impact on stable energy supplies (in Japan)," Kishida said, noting that Japan has sufficient crude oil and LNG in reserves.

But the prime minister added that the government will consider "all possible options" to mitigate the impact of higher crude oil prices on Japanese households.