Japan suffered a 10-4 defeat to Great Britain in Beijing Olympics women's curling on Tuesday as their record fell to 4-3 in the 10-team round-robin.

Japan, the bronze medalist at the 2018 Olympics, could not respond to a strong start from Great Britain, which showed good accuracy from the early stages to improve to 4-3.

Great Britain, beaten by Japan four years ago in the bronze medal match, took full advantage in holding the hammer in the first end, skip Eve Muirhead removing a center guard and another near the button with her two shots to rake in three points. 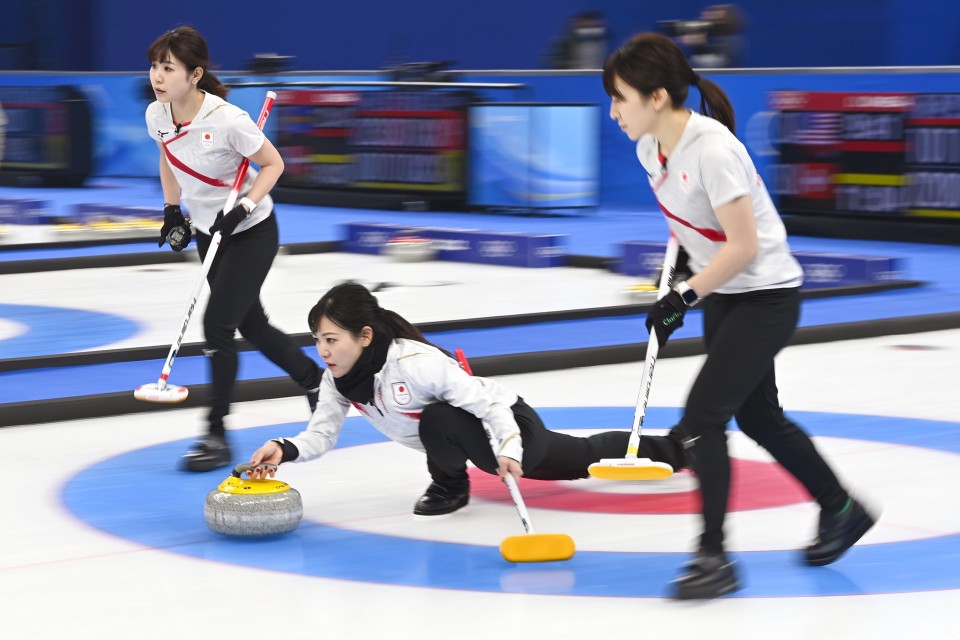 Chinami Yoshida (C), Yurika Yoshida (L) and Yumi Suzuki play in Japan's round-robin match against Britain in the women's curling competition at the Beijing Winter Olympics on Feb. 15, 2022, at the National Aquatics Centre in Beijing. (Kyodo)

Japan was restricted to a point in the second and Muirhead capitalized again with the hammer in the third, bumping an opposition stone out with her final throw to score another three for a 6-1 lead.

Japan had a chance to score two in the sixth when trailing 7-3 but settled for one, when skip Satsuki Fujisawa, only needing to place her final stone near the center, saw her easy shot stop well short of the house.

The difficult outing continued for the skip, whose double takeout attempt to close the eighth ended up giving two points to Great Britain before the team shook hands with two ends to spare.

"It's frustrating to lose but we only have two games to go and we've waited four years to stand at this stage. We'll look to have two good outings."