Japan dropped to 4-2 having emphatically beaten host China 10-2 earlier in the day. With its skip throwing close to 100 percent for the game, South Korea sealed a well-earned win over the 2018 bronze medalist and improved to 3-3 for the round robin. 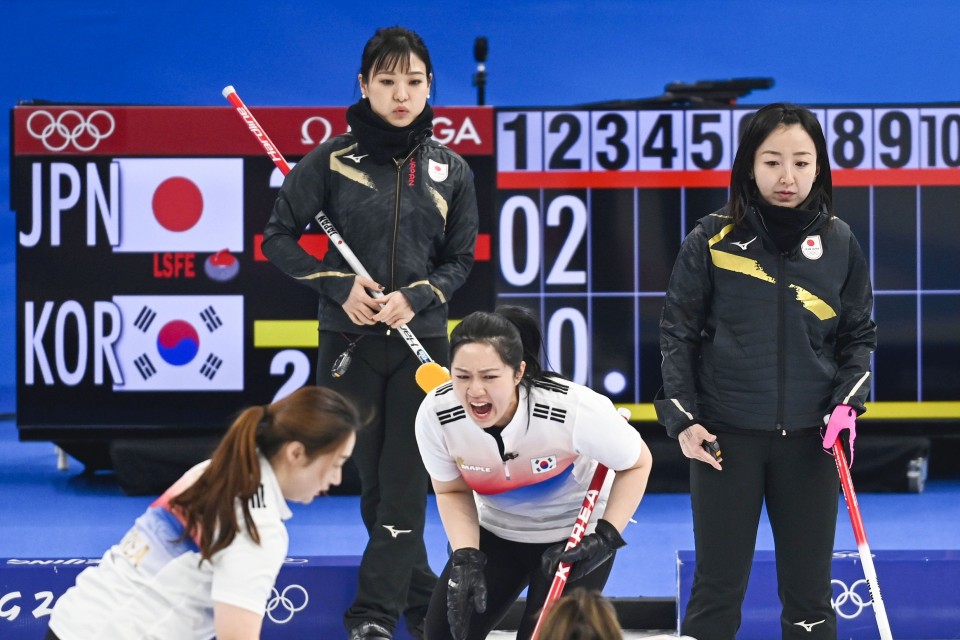 Japanese curlers (black) play in a women's round-robin match against South Korea at the Beijing Winter Olympics on Feb. 14, 2022, at the National Aquatics Centre in Beijing. (Kyodo)

Narrow winners of that clash four years ago en route to a silver medal, skip Kim Eun Jung and South Korea's "Garlic Girls" needed a victory at Beijing's National Aquatic Centre to get back on track following two straight losses.

Japan took a 2-1 lead with a two-point second, but South Korea answered straight back with a three-ender after Kim Eun Jung raised a double takeout with the hammer in the third.

The South Koreans stole one to extend the lead the following end, holding onto the shot rock by centimeters after Fujisawa raised a touch too light with her last throw.

The Japanese skip was right on target to close out the following end, however, raising her opponent's stone with her final throw to score two and leave her team trailing 4-5 at the halfway point.

South Korea scored another two-ender in the sixth after Fujisawa ran into her own guard attempting a takeout, leaving the door open for Kim Eun Jung to slide in a second counter with the hammer.

The two sides went back and forth scoring one each with the hammer in the seventh and eighth ends, but another South Korean two-ender in the ninth prompted Japan to call the game. 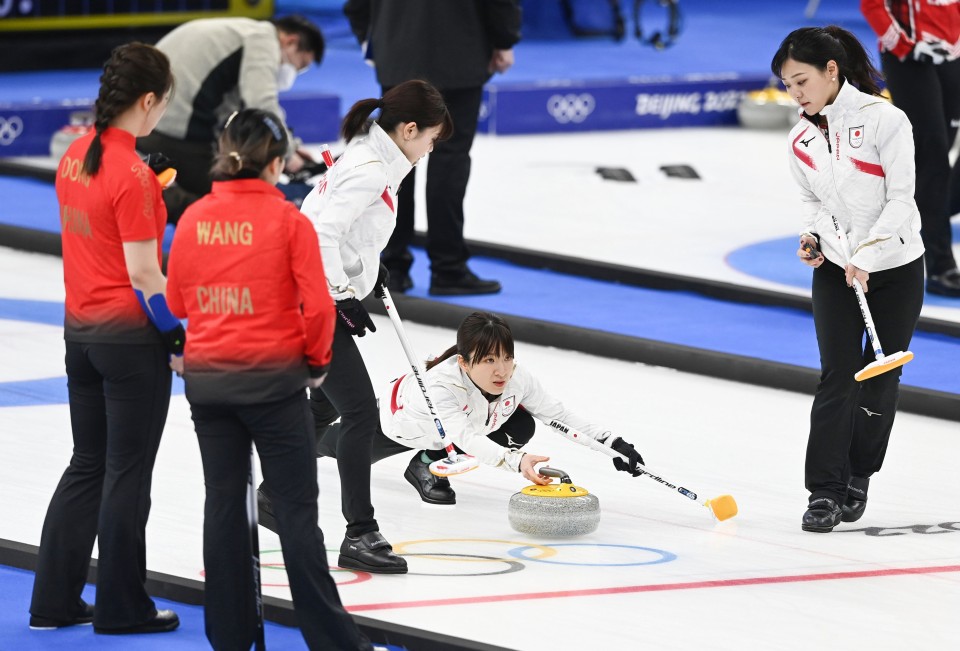 Japanese curlers (white) play in a women's round-robin match against China at the Beijing Winter Olympics on Feb. 14, 2022, at the National Aquatics Centre in Beijing. (Kyodo) ==Kyodo

In the morning session, Japan fell behind China by one shot in the second end but roared into life with seven unanswered shots over the next three, taking and extending a lead that would never be overcome.

Fujisawa and third Chinami Yoshida took advantage of opportunities presented by some poor Chinese play to run up the score.

"Everyone led out well and I was able to just place guard shots, so it was pretty stress free for me. After China we play South Korea so we are calling it Asia Day. I'll continue to focus on the ice," said skip Fujisawa.

Playing with the hammer, the Japanese got on the scoreboard with a three-shot third end. Fujisawa and Yoshida made their final three stones count with draws to the button while Chinese skip Wang Rui threw two poor shots that failed to lessen the damage.

They then put the game out of reach in the fifth stanza with another three-shot effort when some wayward early-end play by the Chinese left Wang needing miracle stones to save her team.

She cut the deficit from four to three with her final stone, but could do no better as the score blew out to 7-1.

China clawed back a shot in the sixth but Japan piled on three more over the final two ends to complete the rout.