Japan erased a three-point deficit on the way to a 10-5 win Saturday over the Russian Olympic Committee in women's curling at the Beijing Winter Games.

Following a thrilling 8-7 comeback victory over Denmark in the morning session, skip Satsuki Fujisawa and team Loco Solare made it two from two for the day, improving to 3-1 overall in the round robin. 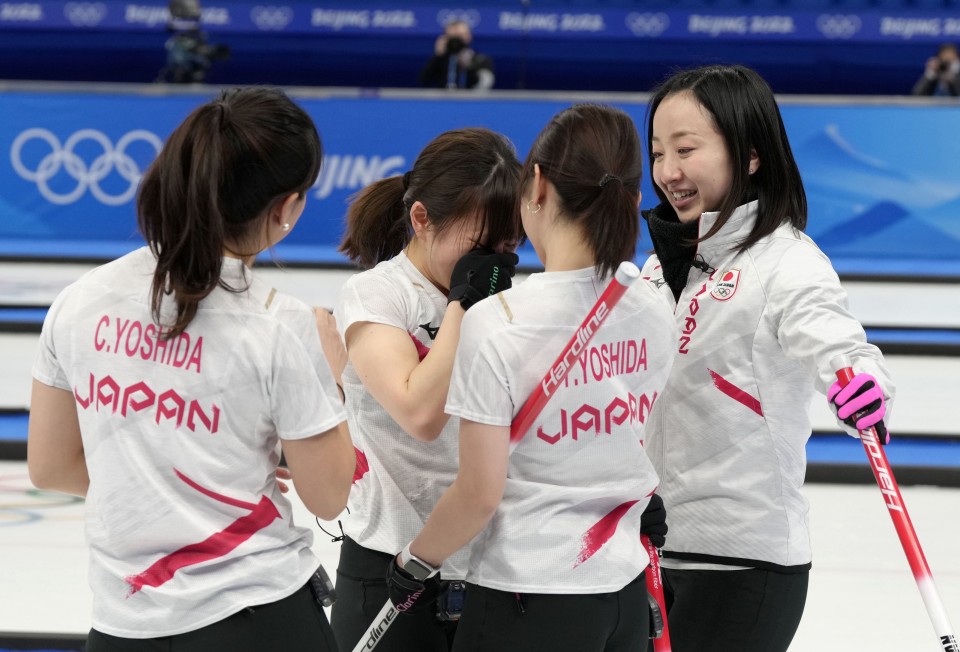 Japanese curlers celebrate after their win over the Russian Olympic Committee at the Beijing Olympics on Feb. 12, 2022, in Beijing. (Kyodo)

The two sides traded points with the hammer through the first three ends at Beijing's National Aquatics Centre before skip Alina Kovaleva and the ROC stole two in the fourth, taking a 4-1 lead when Fujisawa grazed her own guard and blew a double takeout.

Japan had to settle for one in the fifth, with Fujisawa taking out one ROC stone and drawing centimeters away from a second at the edge of the house on another difficult double takeout bid.

The skip was right on target in a big seventh end, however, raising with the hammer to complete a three-ender and tie the contest at 5-5 after third Chinami Yoshida set the table with consecutive takeouts.I

Japan stole one in the eighth and scored one with the hammer in the ninth to take a 7-5 lead into the final regulation end. With ROC gambling in pursuit of multiple points, Kovaleva was eventually saddled with a virtually impossible draw attempt, leaving three Japanese counters.