Okinawa's daily COVID cases to climb close to 1,000 on Thurs.

Okinawa Gov. Denny Tamaki said Thursday the number of daily coronavirus cases in the southern Japanese prefecture is expected to rise sharply to around 980 from 623 cases a day earlier, and that the local government has decided to request a quasi-state of emergency be declared.

A daily count of that level would be a record high for Okinawa and the prefectural government sees the recent sharp gains in coronavirus cases as attributable to the spread of the Omicron variant at U.S. military bases on the island. 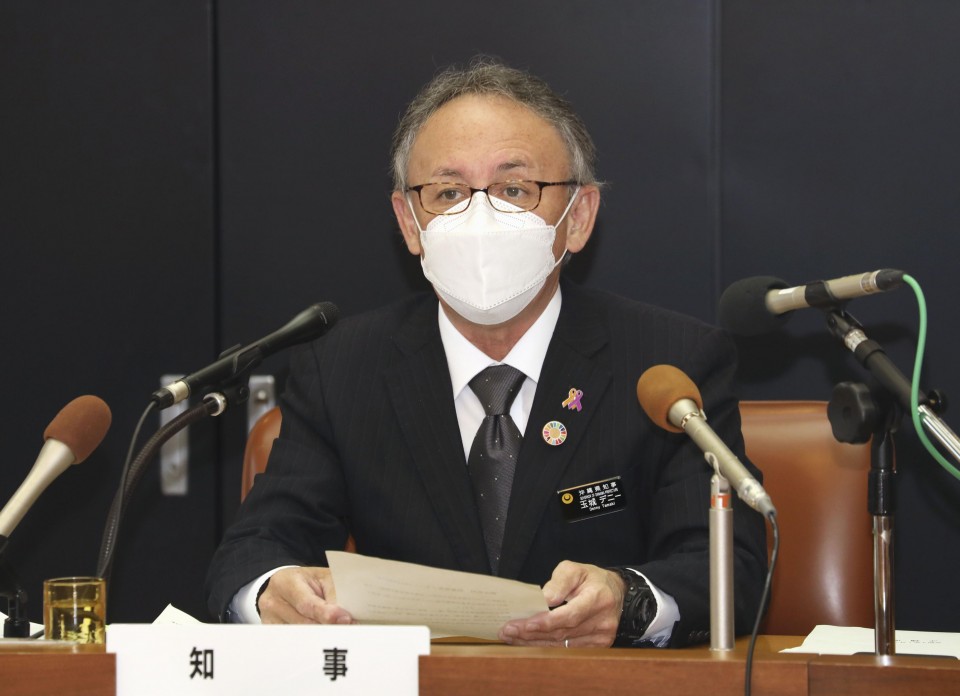 Okinawa Gov. Denny Tamaki meets the press at the prefectural headquarters in Naha, southern Japan, on Jan. 6, 2022, amid a recent spike in coronavirus infections in Okinawa. (Kyodo) ==Kyodo

The Okinawa government is seeking to impose stricter anti-virus measures under the quasi-emergency declaration that will likely be in place from Sunday to Jan. 31.

Based on the request, the government of Prime Minister Fumio Kishida is expected to declare a quasi-emergency on Friday, the first such measure since he took office in October as Japan had seen a downtrend in new cases in recent months.

"If requested, the government will swiftly consider it by working closely with the governor and listening to expert evaluations," Chief Cabinet Secretary Hirokazu Matsuno told a press briefing.

Under a quasi-state of emergency, local governors and mayors are allowed to impose stricter anti-virus measures and request dining establishments to shorten business hours.

The Okinawa government has taken the view that the highly transmissible Omicron has become dominant, replacing the Delta strain, which sent infections surging last year.

"Okinawa has seen the number of cases rising since late last year and sharp increases have been reported in the prefectures of Yamaguchi and Hiroshima," Matsuno, the top Japanese government spokesman, said.

In the country's southwest, Hiroshima Prefecture, which saw 138 new infections on Wednesday, requested a quasi-state of emergency be declared, while its neighbor Yamaguchi Prefecture is also expected to seek the same measure.

Okinawa is home to the bulk of U.S. military installations in Japan and a cluster of infections has been confirmed at the U.S. Marine Corps' Camp Hansen.

The city of Iwakuni in Yamaguchi, which hosts the U.S. Marine Corps Air Station Iwakuni, on Thursday reported its second-highest daily count of 115 people infected with the virus.

Hiroshima Gov. Hidehiko Yuzaki, who has said "many cases" can be traced to Iwakuni city, warned that the prefecture could see its largest spread of the virus, with a daily count of new infections predicted to surpass 2,000.

The U.S. forces in Japan said Thursday they will bolster anti-virus measures among their personnel, mandating mask-wearing in any public area and on-base facility until a negative COVID-19 test is received. Wearing masks is also required off-base, regardless of vaccination status.

The military has moved to require all of their personnel to test for the coronavirus within 24 hours of their arrival in Japan after facing criticism for having exempted those departing from the United States from PCR tests since early September in line with U.S. policy.

Kishida has vowed to take all necessary measures to pre-empt a surge in COVID-19 cases, banning the entry of nonresident foreign nationals into Japan. His government is seeking to speed up the rollout of vaccine booster shots and making orally administered treatment drugs available.

The number of newly confirmed coronavirus cases topped 2,000 in Japan for the first time in over three months on Wednesday, even though it is still lower than other nations including the United States.

So far, at least 37 of Japan's 47 prefectures have reported Omicron infections, with community transmissions confirmed in areas including Tokyo and Osaka.

Tokyo confirmed 390 cases on Wednesday but Gov. Yuriko Koike said the metropolitan government does not plan to ask for a quasi-state of emergency "for now."

Koike plans to meet with Kishida later in the day to discuss the infection situation in the Japanese capital and plans for third shots of COVID-19 vaccines, a metropolitan government official said. 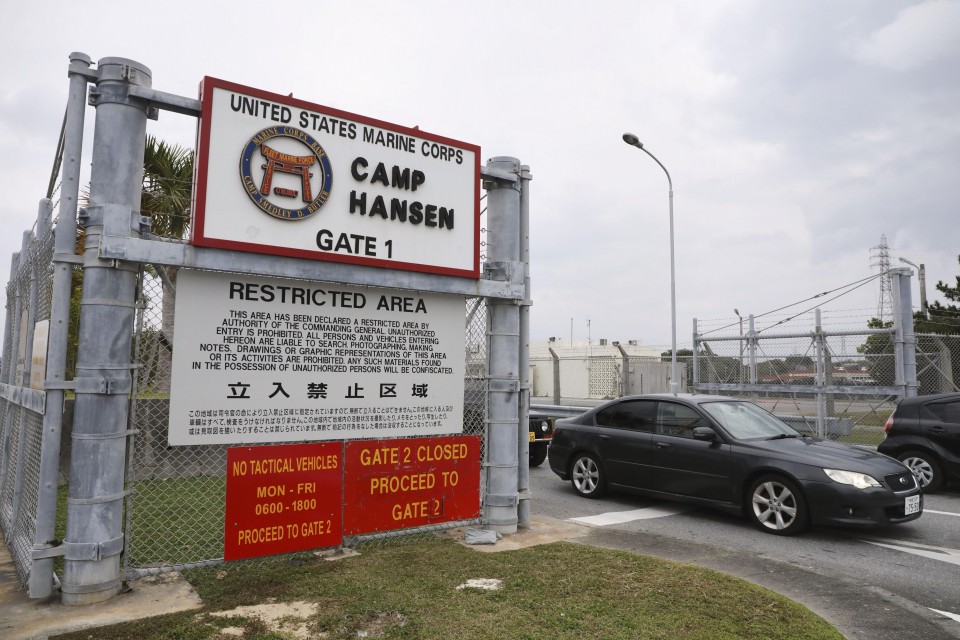 Photo taken on Jan. 5, 2022, shows the U.S. Marine Corps' Camp Hansen in the Okinawa Prefecture town of Kin, southern Japan. A large number of COVID-19 cases were recently reported at the U.S. base. (Kyodo) ==Kyodo