Hayashi told reporters after phone talks with his U.S. counterpart that he requested that the United States take thorough measures to prevent the virus from spreading further to address growing fears among local residents around U.S. bases. 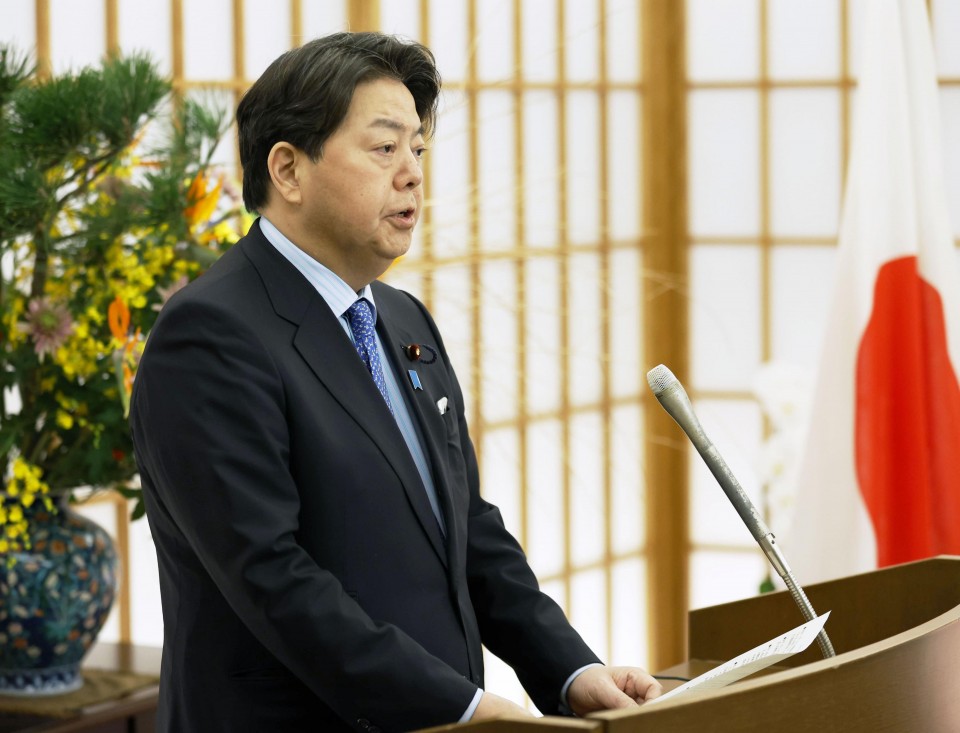 Japanese Foreign Minister Yoshimasa Hayashi meets the press in Tokyo on Jan. 6, 2022, after asking U.S. Secretary of State Antony Blinken in phone talks to impose curfews on U.S. bases in Japan due to a recent surge of coronavirus infections among American military personnel. (Kyodo) ==Kyodo

Blinken responded that it is important to ensure the health and safety of not only U.S. military personnel but also local residents, adding that Washington will "do everything it can" by working together with Tokyo to curb the virus spread, according to Hayashi.

U.S. Forces Japan said in a release issued after the talks that "more stringent mitigation measures" will be introduced for all U.S. military installations in Japan "due to the recent increase in COVID-19 cases" at their facilities.

When movements are restricted until a negative test result is confirmed, wearing a mask will be required in public places and on-base facilities as part of the new measures, according to U.S. Forces Japan.

The talks, held at the request of Blinken, came as new COVID-19 cases have been rising in prefectures hosting U.S. military bases such as Okinawa and Yamaguchi with clusters of cases at U.S. force facilities, amid the spread of the highly transmissible Omicron variant.

In Okinawa, a group infection was reported at the U.S. Marine Corps' Camp Hansen in Okinawa Prefecture in mid-December.

Hayashi said last month U.S. forces in Japan had exempted their personnel from testing for the virus upon departure from the United States since early September in line with U.S. policy but it was changed at Japan's request.

All U.S. forces personnel are now required to test for COVID-19 72 hours ahead of departure from the United States, and within 24 hours after their arrival in Japan.

Hayashi also said he and Blinken reconfirmed their corporation to achieve a "free and open Indo-Pacific" in an apparent bid to deal with China's assertiveness in the region, and to realize the complete denuclearization of North Korea, which fired what appeared to be a ballistic missile toward the Sea of Japan on Wednesday.

Pyongyang's state-run Korean Central News Agency said Thursday that North Korea has confirmed it test-fired a newly developed hypersonic missile, which is generally considered to be hard to be intercepted.

Asked about the KCNA report, Hayashi said only that the projectile launch is still under analysis.

Blinken condemned North Korea's "ballistic missile launch" during the talks, while discussing with Hayashi the efforts to deter Russia from further military action or other aggressive acts to support Ukraine's independence, according to the U.S. State Department.