The U.S. dollar briefly hit a five-year high in the upper 115 yen range on Tuesday, while Tokyo stocks surged to bring the Nikkei index to its highest level since late November on the first trading day of 2022. 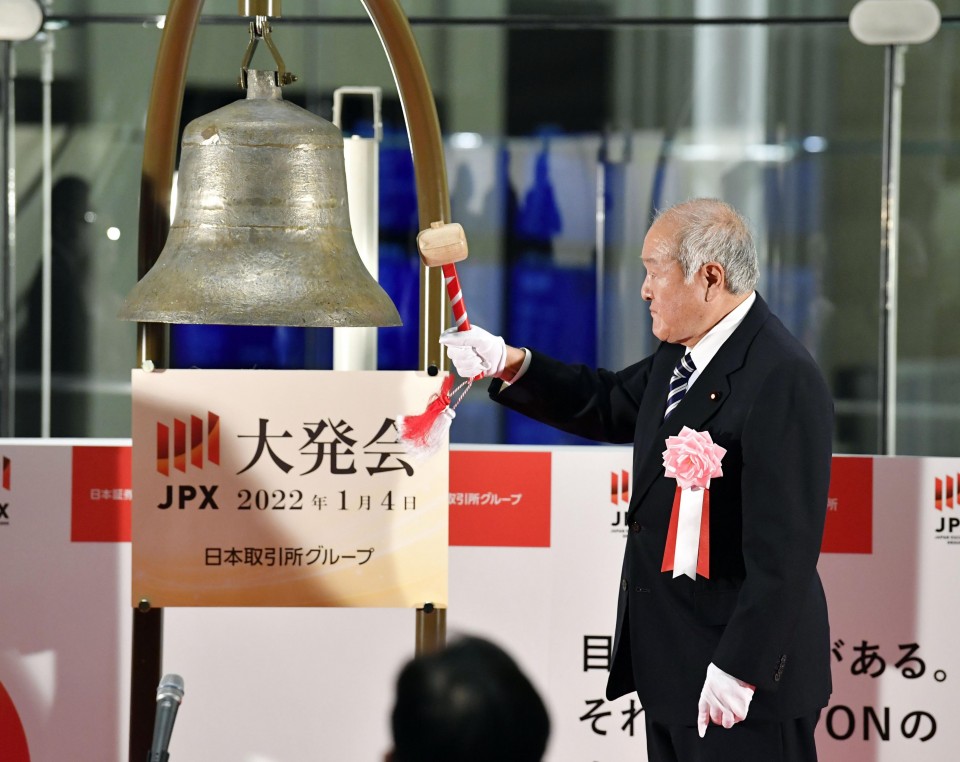 Japanese Finance Minister Shunichi Suzuki rings the bell at the Tokyo Stock Exchange on Jan. 4, 2022, during a ceremony to mark the first trading day of the year. (Kyodo)

The dollar rose to the upper 115 yen range, the highest level since January 2017, on growing expectations for an early interest rate hike by the U.S. Federal Reserve after an overnight rise in U.S. Treasury yields, dealers said.

It was also pushed up on increased risk appetite, with "investors motivated to buy the U.S. dollar in tandem with a surge in Tokyo stocks," said Yuji Saito, head of the foreign exchange department at Credit Agricole Corporate & Investment Bank in Tokyo.

Market participants may try to test the 116 yen range now that the dollar has topped the mid-115 yen level logged in November, he added.

Meanwhile, investors bought a wide range of issues in Tokyo after the Dow Jones and S&P 500 indexes closed overnight at all-time highs. The Nikkei benchmark extended gains in the afternoon, advancing over 500 points, or nearly 2 percent.

The market's reaction to the highest daily number of coronavirus cases in Tokyo in three months on Monday at 103 was limited due to reports that the Omicron variant, which has been rapidly spreading, was less likely to cause hospitalization, brokers said.

On the First Section, advancing issues outnumbered decliners 1,625 to 494, while 64 ended unchanged.

The yield on the benchmark 10-year Japanese government bond rose 0.015 percentage point from Thursday's close to 0.085 percent, the highest level since November as it tracked a rise in U.S. Treasury yields.