The Tokyo stock market is expected to maintain its upward momentum into 2022, as a continued rebound in corporate earnings will likely offset lingering concerns over global inflation along with expectations of improvement in the pandemic situation.

Market analysts forecast the benchmark 225-issue Nikkei Stock Average to rise to as high as 34,000, a level not seen since March 1990 and an 18 percent rise from the closing level on the final trading day of 2021 on the Tokyo Stock Exchange. The downside is expected to hold firm around 26,000. 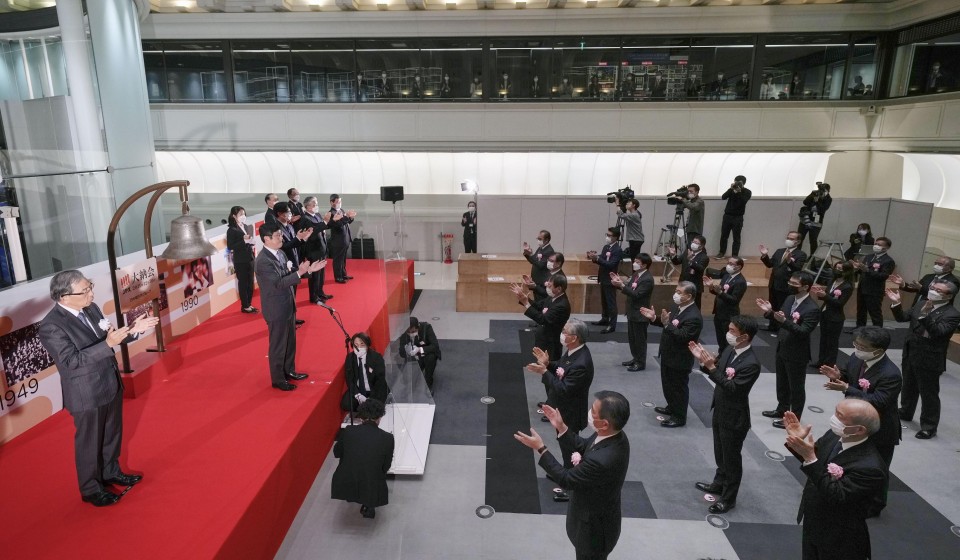 Market officials wearing masks for protection against the coronavirus make a ceremonial hand-clapping at the Tokyo Stock Exchange after the last trading session of the year on Dec. 30, 2021. (Kyodo) ==Kyodo

Along with precision equipment makers, the retail, land and air transport and service sectors are expected to lead profit growth of Japan Inc. after restrictions imposed to curb the pandemic dented demand for shopping outings and travel to put these sectors in the toughest business environment among other industries.

The tourism industry, for example, is also expected to benefit from reopening economic activities in line with progress in vaccinations against COVID-19, as the government is expected to resume its "Go To Travel" subsidy campaign after the travel promotion program was halted nationwide in December 2020 following a spike in new coronavirus cases.

Listed companies are projected to post 8 to 10 percent growth in pretax profit in the fiscal year ending in March 2023, according to estimates by major securities houses.

"Profits are expected to grow around 10 percent (in fiscal 2022), and stocks will rally even if (the growth is limited to) just 5 percent," said Shingo Ide, chief equity strategist at the NLI Research Institute.

The Organization for Economic Cooperation and Development said in its latest forecast that the global economy will expand 4.5 percent in 2022, while Japan's is estimated to grow 3.4 percent.

The OECD added "deadlier strains of the virus" could deal a heavy blow to the world economy. But market players are not overly worried about the new Omicron variant of COVID-19.

"Investors will continue to keep an eye on news on the new strain, but hopes for Omicron vaccines are expected to dispel any serious fears," said Maki Sawada, a strategist at Nomura Securities Co.'s investment content department.

Vaccine makers such as Pfizer Inc. and Moderna Inc. have said getting a third shot of their COVID-19 vaccines should provide an increase in protection against the Omicron variant.

Sawada said new COVID-19 drugs are also likely to ease concerns over the pandemic, helping the market rally to the 34,000 mark by the summer.

Japan has seen an increasing number of infections with Omicron, albeit at a far slower pace than in some other countries. But a resurgence of COVID-19 cases led by the new variant is unlikely to generate immense jitters, given reports that Omicron may cause less severe illness compared with other coronavirus variants, Sawada added.

In the currency market, the U.S. dollar is forecast to strengthen further against the Japanese currency to 118 yen after rising above 115 yen, its highest level since March 2017, in late November. The U.S. currency has stayed around the 114 yen level recently.

Still, the Tokyo stock market is not expected to get a substantial boost from further yen depreciation. A weaker yen boosts exporters' overseas profits when repatriated but investors remain wary as it also lifts import costs at a time when energy and material prices are on the rise, analysts say.

A surge in raw material and energy costs is among major risks in 2022. Average gasoline prices in Japan briefly climbed to their highest level in seven years in 2021.

Reflecting a supply chain crunch and surge in demand on the back of reopening businesses worldwide, the U.S. consumer price index for November rose 6.8 percent from a year earlier, logging the sharpest increase in over 39 years. Surging inflation rates in the world's biggest economy pulled global markets sharply lower at one time in 2021.

But market participants are convinced that the Federal Reserve will address the inflation risk in a timely manner after Fed Chairman Jerome Powell said in November that the U.S. central bank would speed up reducing asset purchases, while its December two-day policy meeting indicated three rate hikes in 2022.

"The Fed's approach to rapid price increases has allowed market participants to regain a sense of calm as the bank was clear on the need to tackle the issue," said Masahiro Yamaguchi, head of investment research at SMBC Trust Bank.

Market players will also pay close attention to the U.S. November midterm elections. If Republicans retake the majority in the Senate, U.S. President Joe Biden and the Democratic Party "may struggle to pass legislation for the remainder of his term, dampening sentiment and lowering stocks," Sawada said.

The House of Councillors election in Japan is another event to watch out for to see whether the ruling Liberal Democratic Party will be able to hold onto its stable rule, she added.

The Tokyo Stock Exchange is also set to reorganize its current four trading sections into the three "Prime," "Standard" and "Growth" sections on April 4, but the restructuring is unlikely to affect the Nikkei index's calculation significantly, according to Yamaguchi.

According to a Japanese traditional stock market proverb, the Year of the Tiger in the Chinese zodiac -- falling in 2022 this time -- is considered a good year for stocks. However, analysts take the saying with a grain of salt as the most recent previous Tiger years have not seen particularly good market performances.