The ministers also discussed "the situations in Hong Kong and Xinjiang," where Beijing has been accused of human rights abuses, and the "importance of peace and stability across the Taiwan Strait," according to a statement issued by Britain, the G-7 chair, after their two-day talks in Liverpool, England.

In a separate statement, the G-7 ministers and their counterparts from the Association of Southeast Asian Nations, who attended a part of the meeting, reaffirmed their "shared interest in maintaining a free and open Indo-Pacific region," in a veiled counter to China's attempts to alter the regional status quo with its growing military and economic clout.

Japanese Foreign Minister Yoshimasa Hayashi stressed that ASEAN is key to achieving a free and open Indo-Pacific, according to his ministry. 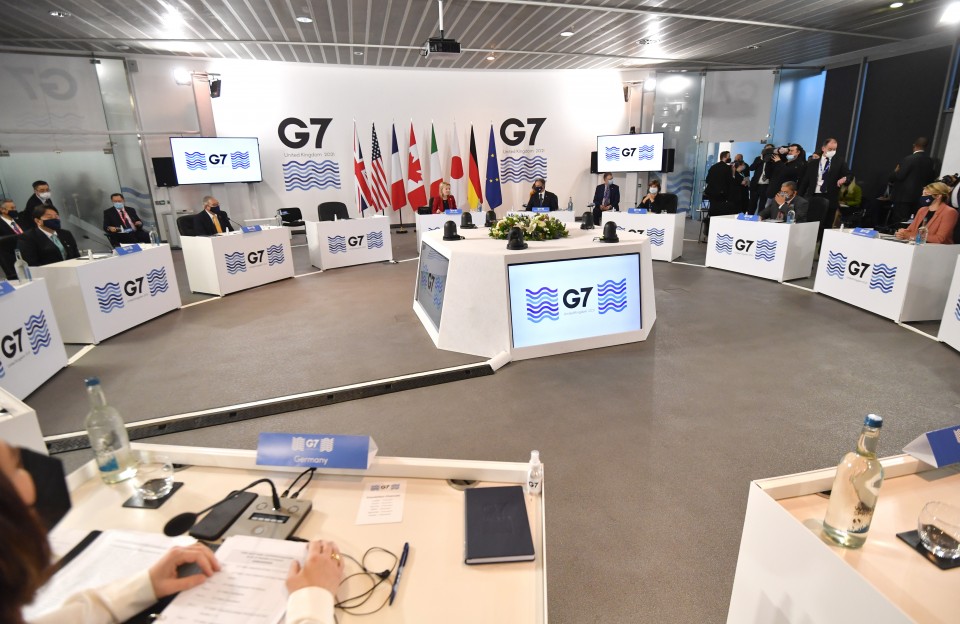 The G-7 foreign ministers held talks with their counterparts from the ASEAN countries for the first time, as well as from Australia, South Korea and India, on the second day of the G-7 gathering, apparently to coordinate with the 10-member ASEAN and three other regional powers over policy on China.

Of the ASEAN member states, military-ruled Myanmar was excluded from the gathering as the country was thrown into political turmoil following a coup in February.

On the ASEAN side, Brunei and the Philippines attended the meeting in person, while seven others joined virtually due to the spread of the Omicron coronavirus variant.

The G-7 ministers also called for "complete, verifiable and irreversible abandonment" of North Korea's nuclear weapons and ballistic missiles and that Pyongyang "resolve the abductions issue immediately," according to one of the statements.

During two days of talks, the foreign ministers of the G-7 -- Britain, Canada, France, Germany, Italy, Japan and the United States, plus the European Union -- shared concerns about Russia's military buildup near the border with Ukraine.

Other than the chair's statements, the G-7 ministers issued a statement on Russia and Ukraine, saying Moscow would face "massive consequences and severe cost in response" if it engages in further military aggression toward Ukraine, condemning the Russian military buildup and aggressive rhetoric.

The G-7 reaffirmed their "unwavering commitment" to Ukraine's sovereignty and territorial integrity in the face of Russian aggression while commending the Eastern European nation's "posture of restraint."

The United States and its European allies are concerned that the movement of Russian troops and weapons to the border area may be a prelude to an invasion.

As for Iran's nuclear activities, the G-7 ministers welcomed the resumption of talks late last month between Tehran and Washington over the Middle East nation's return to the 2015 multilateral nuclear deal, under which Iran agreed with six major powers to limit its nuclear program in return for sanctions relief.

Meanwhile, they urged Iran to "stop its nuclear escalation."

The crisis in Myanmar was also among the agenda items of the expanded G-7 sessions, with the foreign ministers expressing "deep concern over recent developments" there, such as the sentencing of ousted civilian leader Aung San Suu Kyi.

Regarding the pandemic, the G-7 and ASEAN agreed to promote cooperation in ensuring recovery from the economic fallout from the virus's spread, according to Japan's Foreign Ministry.