The Japanese government said Wednesday it has agreed to pay damages to a former Finance Ministry bureaucrat's wife who alleges her husband killed himself after being ordered to tamper with documents related to favoritism allegations against then Prime Minister Shinzo Abe.

The decision to pay around 100 million yen ($880,000) in compensation as sought by Masako Akagi, 50, ends the suit filed nearly two years ago between the state and the plaintiff and ensures the detailed process leading to the alteration of the documents will not be revealed. 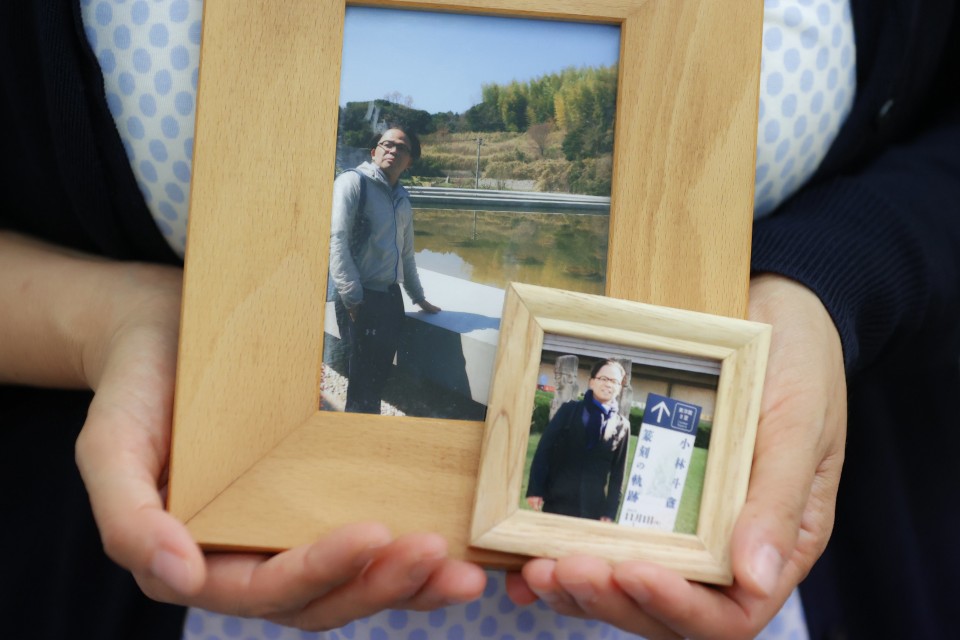 Masako Akagi holds photos of her husband Toshio, who worked at the Finance Ministry's Kinki Local Finance Bureau and committed suicide at the age of 54 in March 2018 after suffering severe mental distress, in Osaka on July 14, 2020. (Kyodo)

"I feel like I lost (in the suit)," Akagi said with tears in her eyes at a press conference in the major western city, after officials said the government has come to believe that it is "not appropriate to prolong the proceedings unnecessarily."

"The ministry ended the suit in a cowardly way. I wonder what my husband would say," she said, adding what she wanted was not money but the truth.

Her husband Toshio Akagi committed suicide at age 54 in March 2018. She claims he suffered from severe mental distress.

"The state ended the lawsuit in a closed consultation," her lawyer told the news conference, adding the government did not give any prior notification. "I believe the state has facts that it wants to hide."

The lawsuit will continue with the remaining defendant, Nobuhisa Sagawa, then chief of the ministry's Finance Bureau in charge of managing state assets. The plaintiff alleges Sagawa ordered his subordinates in February to March 2017 to alter the documents regarding a heavily discounted sale of state-owned land to a private school operator with ties to Abe's wife Akie.

Akie Abe was an honorary principal of an elementary school that was to be opened by Moritomo Gakuen, an educational institution in Osaka and the buyer of the state land in question.

Finance Minister Shunichi Suzuki expressed an apology and condolences to the former ministry official's family after the announcement of the decision.

The ministry retracted its earlier call for the Osaka District Court to dismiss Akagi's claim, as "we reached a conclusion that it was clear that the ministry bears responsibility" for his death, Suzuki told reporters, adding the official had been overloaded with work dealing with Moritomo Gakuen, including the alteration of the document.

The minister said the government made the decision after the plaintiff's whole argument became clear in the previous court hearing in October.

The Finance Ministry has admitted to tampering with documents related to the land transaction, while Sagawa has denied personal responsibility.

According to the lawyer, it is extremely rare for the state to accept the plaintiff's claim as is.

In a report on its investigation into the document tampering in June 2018, the ministry admitted Sagawa directed officials to falsify and delete parts of the documents related to Akie Abe.

The plaintiff has asked Prime Minister Fumio Kishida to reinvestigate the case as the report did not refer to the death of her husband, who worked at the ministry's Kinki Local Finance Bureau.