It is hoped the disclosure of the over 500-page file, compiled by Toshio Akagi, a former ministry bureaucrat who was allegedly ordered to alter the documents, will shed light on the details of who instructed what in the scandal involving a dubious land transaction with Moritomo Gakuen, a school operator with ties to Abe's wife Akie. 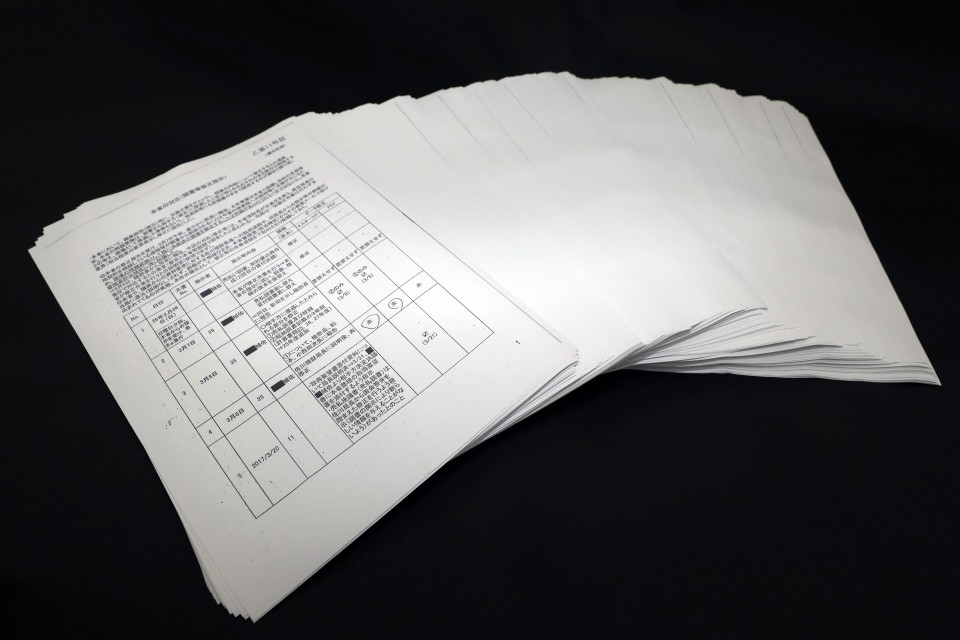 Photo taken on June 22, 2021, in Osaka, shows a copy of an over 500-page file suggesting a former Financial Bureau chief instructed a local finance bureau to alter documents related to favoritism allegations against then Prime Minister Shinzo Abe. (Kyodo)

Akagi, a 54-year-old employee of the Kinki Local Finance Bureau based in Osaka, killed himself in March 2018 after the document tampering scandal. Abe has denied involvement in the dubious sale of state land.

The file, which was finally disclosed to Akagi's widow, revealed how the ministry repeatedly instructed its local bureau to tamper with documents, and contained around 400 redactions, mostly the names of officials.

The ministry released a report in June 2018 admitting Financial Bureau chief Nobuhisa Sagawa made the decision to falsify documents and bureau officials deleted parts of them related to Akie Abe. The ministry said it does not plan to conduct another probe.

The file mentions Sagawa and says the ministry wanted to remove parts of the documents that appeared to show it gave favorable treatment to Moritomo Gakuen, which purchased state-owned land in Osaka Prefecture at a heavily discounted price and named Akie Abe as honorary principal of an elementary school to open on the site.

The file also contained an email sent by Akagi, who belonged to a section that negotiated the land sale, in which he wrote, "I have doubts about altering records already decided."

Akagi's wife Masako, 50, has filed a damages suit against the government over her husband's death and had been calling for the file to be disclosed.

The government only admitted to the existence of the file in May and said it will be submitted before a court session on Wednesday.

With some parts of the file redacted, Masako Akagi said she will fight to have the blacked-out sections restored to reveal the names of the people who instructed her husband.

The file contains copies of emails from the ministry to the Kinki Local Finance Bureau that state there are parts that should be redacted in the event that there is a disclosure request for documents pertaining to Moritomo Gakuen, and that document alteration should be carried out by the end of March 2017.

Amid the unfolding controversy over the dubious state asset transaction, Shinzo Abe told a parliamentary session in February 2017, "If I or my wife were involved (in the land transaction), I would step down as prime minister and a lawmaker."

Sagawa, who was then National Tax Agency head, stepped down in March 2018 to take responsibility for the scandal related to Moritomo Gakuen.