China's Communist Party kicked off a key four-day meeting in Beijing on Monday to discuss a pivotal resolution on the nation's history, state-run media reported, as President Xi Jinping has been paving the way for a controversial third term as its leader.

The sixth plenary session of the 19th Central Committee of the ruling party is expected to end Thursday after a resolution is adopted on the major achievements and historical experiences of its 100 years of endeavors.

Such a resolution would mark the first declaration on Chinese history in 40 years and only the third by the party founded in 1921. 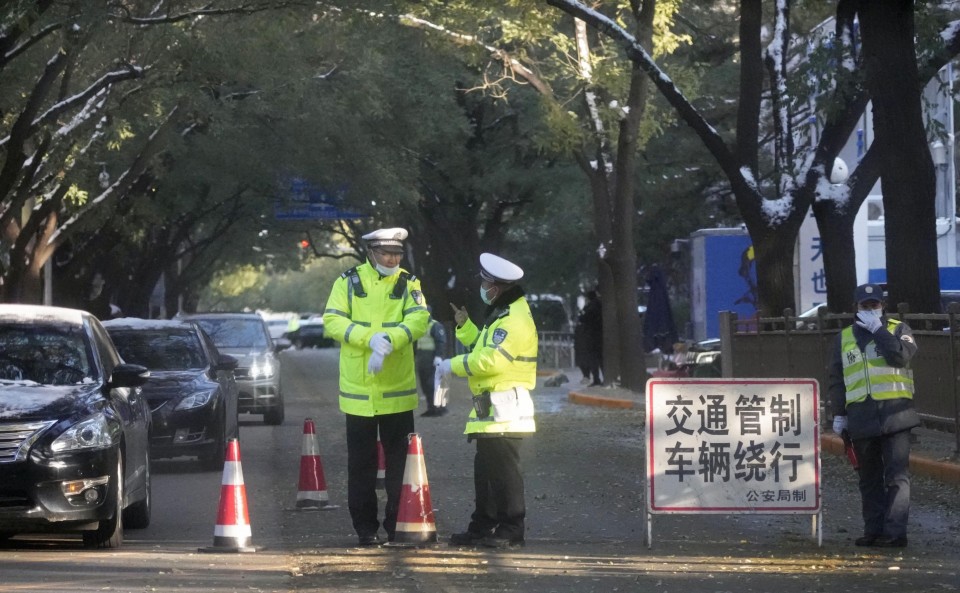 Police officers in Beijing control traffic in an area which appears to be a venue of the Communist Party's sixth plenary session of the 19th Central Committee on Nov. 8, 2021. (Kyodo)

A similar resolution was first issued in 1945 under Mao Zedong, the founder of modern China. The second was adopted in 1981 under Deng Xiaoping, who advanced a policy of reform and opening-up.

On Monday, Xi delivered a work report on behalf of the Politburo of the ruling party's Central Committee and explained the draft resolution, according to the official Xinhua News Agency.

The resolution would be aimed at bolstering the status of Xi, who has apparently been trying to be re-elected as leader of the Communist Party at its twice-a-decade congress in fall next year, foreign affairs experts said.

The party has led all the country's ethnic groups in making remarkable achievements over the past 100 years in the history of human development, Xinhua said, citing a statement issued after a Politburo meeting in October.

The Chinese nation is advancing toward modernization on all fronts, and socialism has successfully blazed a trail in the world's most populous country, the statement said.

Xinhua also quoted the statement as saying the country is taking strides to keep up with the times and that the Chinese nation is embracing bright prospects of national rejuvenation.

In 2018, China removed from its Constitution the two-term limit for the president and vice president, which would enable Xi, who became the head of the party in 2012, to hold onto power for life.

As snow fell heavily in Beijing on Sunday, strict security has been in place in the Chinese capital around what appears to be a venue of the plenary session -- the ruling party's most important gathering after its congress.

The Global Times, a tabloid of the Communist Party, emphasized Monday that the latest session is "crucial" as the meeting is the first major political event since the 100th anniversary of the party's founding on July 1.

The resolution being introduced at this historic juncture will profoundly affect China and even the world, the newspaper added.