New Foreign Minister Yoshimasa Hayashi pledged Thursday to safeguard universal values as well as the peace and stability of Japan and other parts of the world in the face of China's military buildup and assertive territorial claims.

"We are seeing more serious challenges to universal values, which have sustained peace and the stability of the international community, and the international order," Hayashi said at his first press conference since assuming the post on Wednesday following the relaunch of Prime Minister Fumio Kishida's Cabinet. 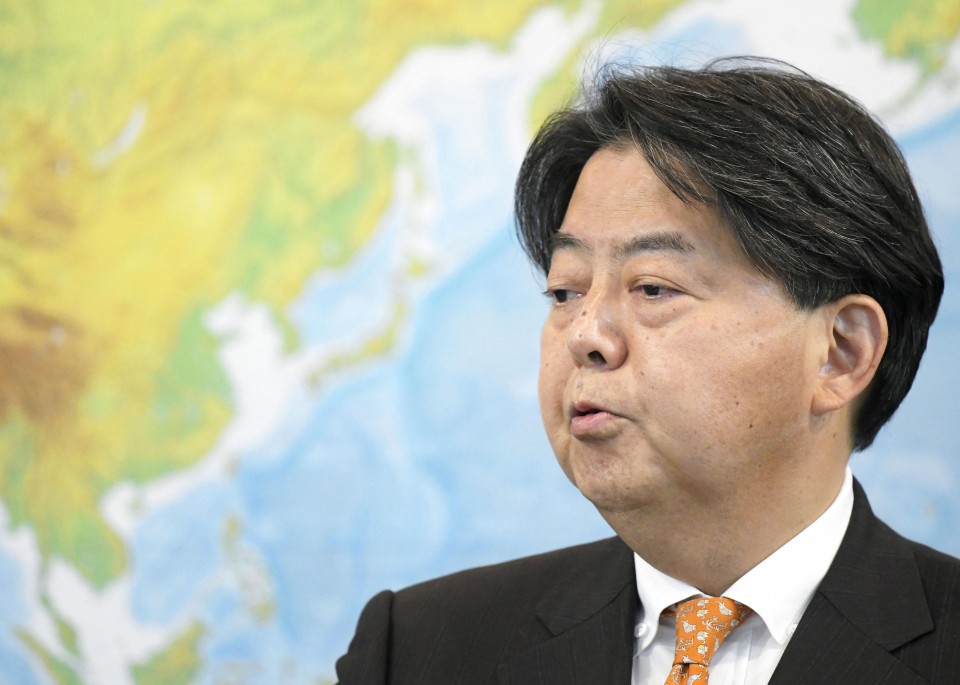 Hayashi, a 60-year-old House of Representatives lawmaker often seen as holding a "pro-China" stance, also said he has decided to quit as head of a cross-party parliamentary group promoting Japan-China friendship, after serving for about four years, "to avoid causing unnecessary misunderstanding."

Former trade minister Yuko Obuchi will succeed Hayashi as head of the group, according to sources close to the matter.

Tokyo has been raising with Beijing issues such as repeated entry into its waters by Chinese vessels near the Japanese-controlled, Chinese-claimed Senkaku Islands in the East China Sea.

Referring to "Beijing's unilateral attempts to change the status quo," Hayashi said Japan will "argue what should be argued, and ask China to behave responsibly," while communicating and cooperating with Beijing to tackle common problems "to build constructive and stable relations."

Nakatani is a leading advocate of introducing sanctions on foreign government officials believed to be human rights offenders, similar to those under the U.S. Magnitsky Act.

Hayashi, who did not clarify his stance on the need for such sanctions, said, "Freedom, respect for fundamental human rights and the rule of law should be guaranteed in any nation."

In the wake of attempts by China to change the status quo as well as other security challenges such as the threat posed by North Korea's missile and nuclear programs, Hayashi underscored the increasing importance of the alliance between Japan and the United States, calling it "the basis for peace and prosperity in the Indo-Pacific region."

Asked about a plan for Chinese President Xi Jinping to make his first state visit to Japan since becoming president in 2013, Hayashi said it is too early to arrange the schedule, citing the need to monitor the COVID-19 situation.

The visit had been set for April last year but was delayed due to the coronavirus pandemic.

On South Korea, Hayashi demanded "appropriate actions" by Seoul to resolve disputes over wartime labor and compensation based on Japan's position so that the two countries could restore a "healthy relationship."

Recognizing that relations between Tokyo and Seoul are "under very harsh conditions," the new minister said outstanding issues "cannot be left unresolved."

As for Japan's longstanding territorial dispute over the sovereignty of four Russian-held islands lying to the northeast of Hokkaido, Hayashi promised he will "not put off to the next generation" the resolution of the issue.

The dispute concerns the islands seized by the Soviet Union following Tokyo's surrender in World War II in 1945 and has prevented them from signing a postwar peace treaty.

Having previously served as defense, agriculture, education, and economic and fiscal policy minister, Hayashi was named foreign minister by Kishida, who was re-elected as prime minister after his ruling coalition won a general election last month.

Hayashi graduated from Harvard University's John F. Kennedy School of Government before winning a House of Councillors seat in 1995.