A group of lawmakers from Lithuania, Estonia and Latvia held talks with Taiwanese President Tsai Ing-wen on Monday after arriving on the island the previous day, a development that will further increase tensions with Beijing following the opening of Taiwan's representative office in Lithuania.

The lawmakers and Tsai agreed to uphold shared values of freedom and democracy during their meeting, in an apparent effort to counter China's growing clout. 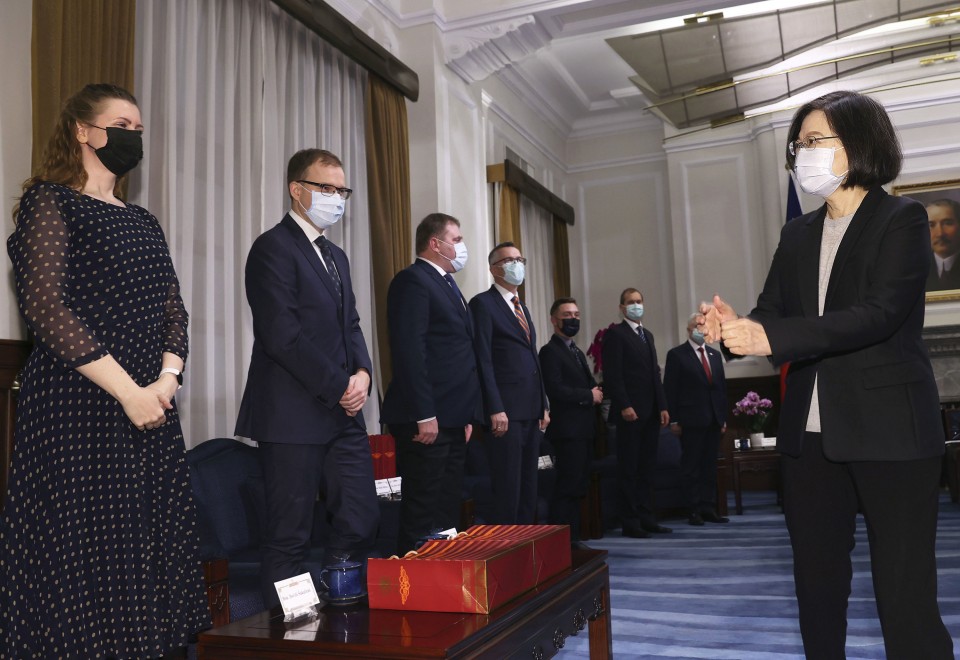 Tsai told the delegation of the three Baltic nations that Taiwan and the countries have similar experiences of breaking free of authoritarian rule and fighting for freedom.

"Now the world faces challenges posed by the expansion of authoritarianism and threat of disinformation," Tsai said, adding Taiwan and the Baltic countries should maintain their free and democratic societies.

In response, Matas Maldeikis, chairman of the Lithuanian parliamentarian group on Taiwan relations, said Lithuania's policy on the self-ruled island has gained wide support in his country.

"Preserving freedom and the rules-based international order is of vital interest for both Taiwan and Lithuania. We must strengthen our ties and work together for this aim," Maldeikis said.

The delegation's visit comes as European states have been strengthening ties with Taiwan in defiance of China's increased military pressure on the island. Europe is also demonstrating unease with Beijing's alleged human rights abuses in the northwestern Xinjiang region.

It marks the first time for a joint delegation of lawmakers from all three Baltic states to visit Taiwan.

China on Monday repeated its mantra that the Asian power firmly opposes any form of official and political exchanges between Taiwan and the countries that have diplomatic relations with the island.

China and Taiwan have been governed separately since they split in 1949 as the result of a civil war. Beijing has regarded the island as a renegade province to be reunified with the mainland, by force if necessary.

Taiwan and Lithuania in July announced they had agreed to open representative offices in each other's capital and that Taiwan would name its one the "Taiwanese Representative Office in Lithuania" rather than substituting its name for that of its capital, Taipei.

On Nov. 18, Taiwan opened the office in the Lithuanian capital of Vilnius from which it carries out consular and other affairs. It is Taiwan's first office in Europe using the island's name. Lithuania is expected to establish its representative office in Taiwan early next year.

In opposition to the move, China downgraded its diplomatic ties with Lithuania on Friday last week.

In announcing the decision, the Chinese Foreign Ministry said Nov. 21 that Beijing's relations with Lithuania would be downgraded to the "charge d'affaires level," a rung below ambassador, adding that the country "grossly interferes in China's internal affairs."

The lawmakers from the three Baltic countries are scheduled to attend a forum held by Taiwan's parliament on Thursday and Friday.