Japanese Prime Minister Fumio Kishida and European Council President Charles Michel are planning to meet in Japan on Nov. 29 to discuss closer ties in the Indo-Pacific region in the face of China's growing assertiveness, a Japanese government source said Sunday.

Kishida and Michel are expected to raise the importance of peace and stability in the Taiwan Strait, democratic values and the rule of law as well as China's attempts to unilaterally change the status quo in the East and South China seas during their talks, the source said. 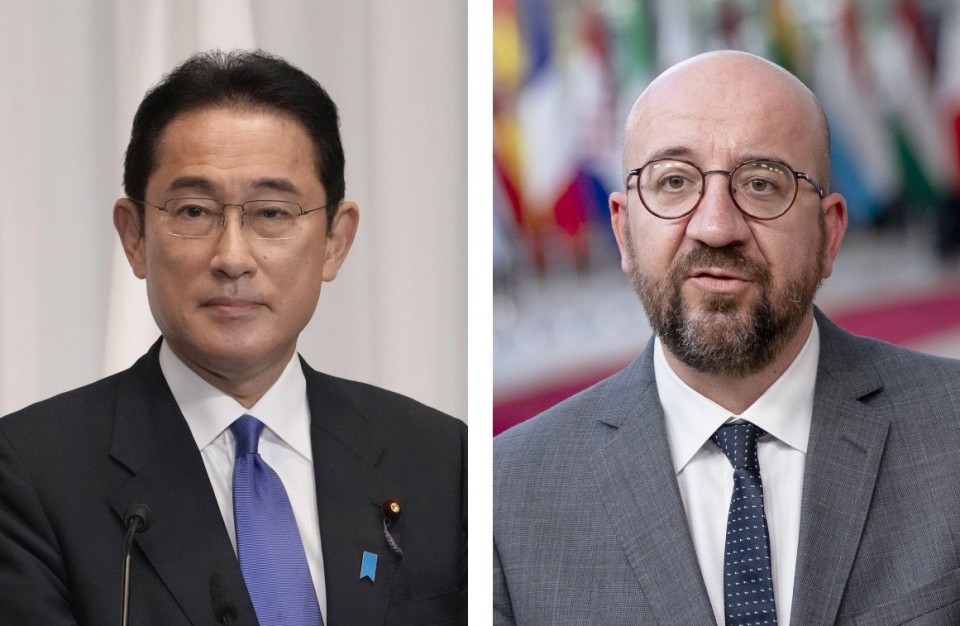 The meeting will be held as Japan seeks to enhance cooperation with the EU to counter China's increasing clout, while the European bloc has been strengthening its commitment to the Indo-Pacific region.

The first visit by Michel to Japan since he took office in December 2019 comes after the EU released its new Indo-Pacific strategy in September that includes bolstering relations with Taiwan amid repeated intrusions of Chinese military planes into the self-governed island's air defense identification zone.

Earlier this month, Taiwan President Tsai Ing-wen held talks with a European Parliament delegation during their historic first visit to the democratic island.

When the EU Council chief held a teleconference with Kishida's predecessor Yoshihide Suga in May, they called for peace and stability across the Taiwan Strait.

The EU also pledged to promote trade of industrial products such as semiconductors and information communications equipment with Japan and Taiwan under the new strategy. The two are also likely to discuss cooperation in beefing up their supply chains of strategic goods such as chips as part of their economic security policies in consideration of China, a global manufacturing center.

Other items on their agenda include potential coordination over climate change and resuming social and economic activities which have been hampered in the coronavirus pandemic.

Given that the recent fall in domestic COVID-19 cases allows Kishida to embark on face-to-face diplomacy, he plans to meet with Vietnamese Prime Minister Pham Minh Chinh in Japan on Wednesday.

Japan aims to deepen cooperation toward the realization of a "free and open Indo-Pacific" with Vietnam, which has been involved in South China Sea disputes with China.