Prime Minister Fumio Kishida, whose ruling coalition is certain to remain in power after Sunday's general election, appears poised to differentiate himself from his predecessor Yoshihide Suga in order to avoid quickly following him out of office.

So far, Kishida has apparently not been making the same mistake as Suga on the communication front.

After taking office in early October, Kishida pledged to listen to people's voices and held talks with business operators and others during election campaigning, apparently to draw a contrast with Suga, who was criticized for being out of touch with public sentiment in the fight against the novel coronavirus pandemic. 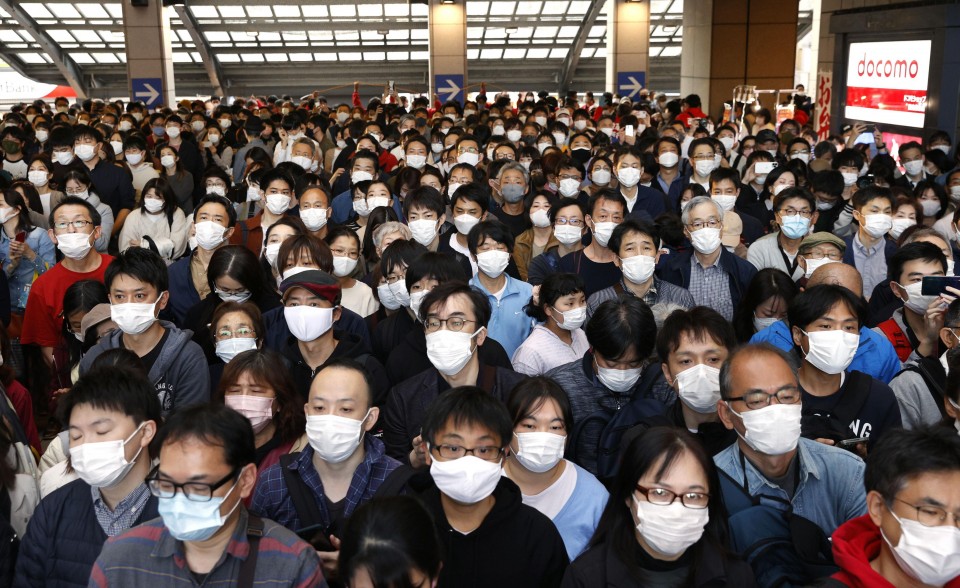 People listen to a politician making a stump speech in Yokohama in Kanagawa Prefecture on Oct. 30, 2021, a day before a general election. (Kyodo) ==Kyodo

"It is evident that Mr. Kishida has better communication skills than Mr. Suga. But people have yet to see the specifics of his policies as his tenure has just begun," said Koji Nakakita, a Japanese politics professor at Hitotsubashi University.

Suga's predecessor Shinzo Abe was in power for nearly eight years, making him Japan's longest-serving prime minister. Suga, who was Abe's chief Cabinet secretary, took over but ended up serving for just a year.

After being elected prime minister on Oct. 4, Kishida quickly dissolved the House of Representatives, the powerful lower chamber of parliament, for an election to seek a public mandate for remaining in power.

While the election was a vote to decide whether the government would be led by Kishida's Liberal Democratic Party or the opposition, it also provided an opportunity for people to give their verdict on the governments of Suga and Abe, and their "one-way communication."

"Mr. Abe returned to power (in 2012) after previous governments had struggled to make decisions. He formed a government that could decide, but it also became a government that did not offer explanations to the people," said Masahiro Iwasaki, a professor of Japanese politics at Nihon University.

"That style was adopted by Suga as well," Iwasaki said. "Now voters want a government that explains."

Abe became mired in favoritism scandals over the government's heavily discounted sale of state land to Moritomo Gakuen, a school operator linked to his wife, Akie, and the decision to approve the construction of a veterinary school under the Kake Educational Institution run by a friend.

Abe stepped down in September last year citing health reasons, after his responses to the allegations failed to convince opposition parties and critics.

Suga, for his part, refused to explain his decision last year not to approve six nominees for the Science Council of Japan who had previously spoken against government policies, a move critics said was politically motivated and an attack on the advisory panel's independence.

Having been criticized for repeatedly declaring COVID-19 states of emergency, he drew fire after saying in August, "We are beginning to see the light" in the coronavirus situation, at a time when many COVID-19 patients were forced to recuperate at home as hospitals in Japan had reached their limits.

Suga stepped down before he could benefit from his government's vaccination drive, which has seen about 70 percent of the population fully vaccinated and a significant decline in coronavirus cases.

"Mr. Suga critically lacked the ability to deliver words that resonate with the people," Nakakita said.

Such an ability was not essential for pressuring bureaucrats to facilitate inoculations, but it was crucial for changing people's behavior so they avoided crowded places and eating out to curb the spread of COVID-19, he added.

During election campaigning, Kishida held talks with business operators and others in a "symbolic move to show he is listening to people and he won't take a top-down approach," according to Iwasaki.

"Whether he can continue that from now on will be key to lifting his approval rate," Iwasaki said.

On the policy front, Nakakita said it is important for Kishida to not only prepare the country for a possible sixth wave of coronavirus infections, but to also reinforce the medical system in the longer run and create a mechanism for the swift provision of financial support to people in need.

As the pandemic brought to light the slow distribution last year of cash handouts due to the different processing systems of local governments, Kishida is likely to push forward with the digitalization of various administrative services under the Digital Agency launched by the Suga government in September.

Kishida has pledged a course correction from "Abenomics," the policy mix under Abe of bold monetary easing, fiscal stimulus and structural reform. The economic policies, also employed by Suga, boosted cooperate earnings but did not lead to increased wages.

Instead, Kishida has proposed a "new capitalism" that places more emphasis on the distribution of wealth.

But he appears to be retaining many of the foreign and security policies of Abe and Suga that called for the reinforcement of Japan's alliance with the United States in pursuit of a free and open Indo-Pacific to counter China's perceived attempts to alter the status quo in the region.

Like his predecessors, Kishida, who served as foreign minister under Abe, views the Quad security framework involving Australia, India, Japan and the United States as valuable for maintaining a rules-based international order.