Voters expressed hope for positive change and a better future Tuesday as official campaigning for the Oct. 31 House of Representatives election kicked off across Japan. 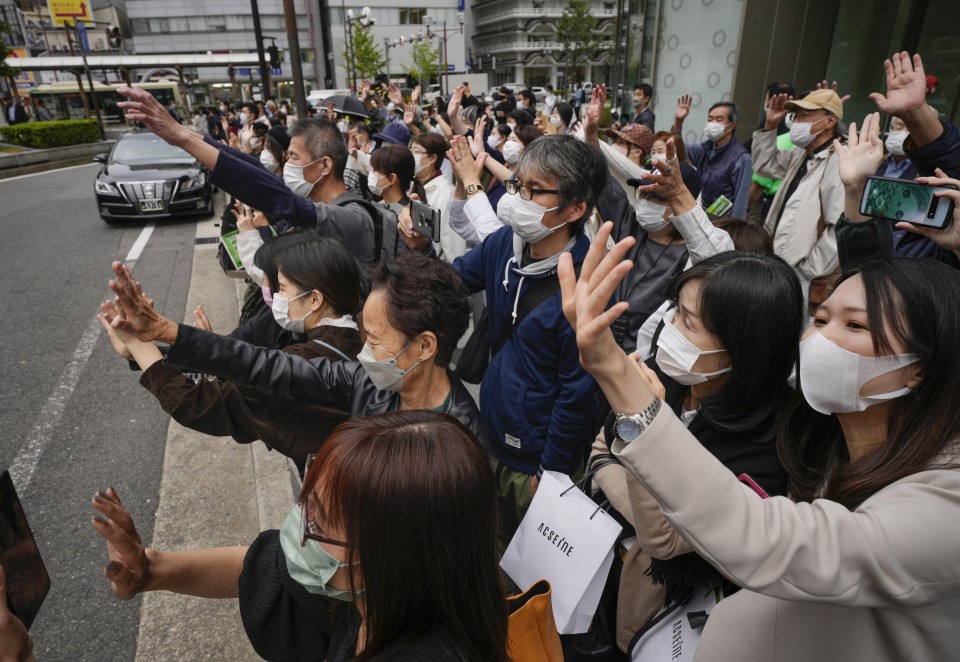 People wave to a politician giving a stump speech in Osaka on Oct. 19, 2021, as campaigning for Japan's Oct. 31 general election began the same day. (Kyodo) ==Kyodo

"We want customers from all over the world to visit us. I hope that the government will formulate policies to stimulate the economy," said Izumi Watanabe, 60, the managing director of Sansuiso, a hot spring "ryokan" traditional Japanese inn hit hard by the coronavirus pandemic.

Following in the footsteps of former Prime Minister Shinzo Abe, Kishida chose Fukushima as the first stop of his stumping tour to show his dedication to reconstruction from the massive earthquake and tsunami in March 2011 that triggered a nuclear plant crisis in the prefecture.

Satoru Saito, a 66-year-old company president in the city of Fukushima, called for continued measures to support the area's recovery from the 2011 disaster, saying, "The scars of the earthquake still remain. There are still people who cannot return to their hometowns."

Meanwhile, at a park near Lake Shinji in Matsue in western Japan's Shimane Prefecture, a crowd of around 100 people applauded as Yukio Edano, head of the main opposition Constitutional Democratic Party of Japan, shouted, "Let's get back to decent politics. Let's change outdated politics."

"The LDP-Komeito government is too selfish. I hope opposition parties will increase their seats in parliament and ensure a balanced debate," said 73-year-old local Kiyoshi Saito.

Hironobu Kichijima, a 45-year-old barber who watched the initial stump speech by Natsuo Yamaguchi, leader of the LDP's junior coalition ally Komeito, near JR Kawasaki Station southwest of Tokyo, expressed hope that the party would win the trust of the people and "realize its policies one by one."

Yamaguchi was met with applause when he stressed that it was his party that "paved the way for the widespread use of the (COVID-19) vaccine" and pledged to rebuild the pandemic-hit society and economy.

Japanese Communist Party Chairman Kazuo Shii vowed to oust the Kishida government, claiming it has inherited policies pursued by the previous administrations led by Abe and Yoshihide Suga, in his stump speech near Shinjuku Station in Tokyo.

Tazuko Ikeda, a 66-year-old former nurse from the western Tokyo city of Higashimurayama, said, "The pandemic made me realize that the politics of the past cannot protect our lives. I want the Japanese Communist Party to grow so that we can change the government."

In Osaka, some voters expressed their intention to vote for a party that would give their children a good future as they gathered to listen to Ichiro Matsui, leader of the Japan Innovation Party, in front of Namba Station.

"I want to choose a political party that will examine whether the anti-virus measures taken so far are correct, and make clear how society can coexist with the coronavirus," said Yukayo Oshima, a 46-year-old who stopped to listen to Matsui's speech on her way to work.