Japanese voters expressed their hopes and concerns over issues such as addressing income disparities and bringing COVID-19 infections under control, as the country held a general election Sunday.

"Politicians speak of redistributing wealth, saying only what is nice to hear, but it makes me worried about the public finances," said Mayumi Igarashi, a Tokyo resident, after listening to a stump speech by Prime Minister Fumio Kishida in the capital on the eve of the election. 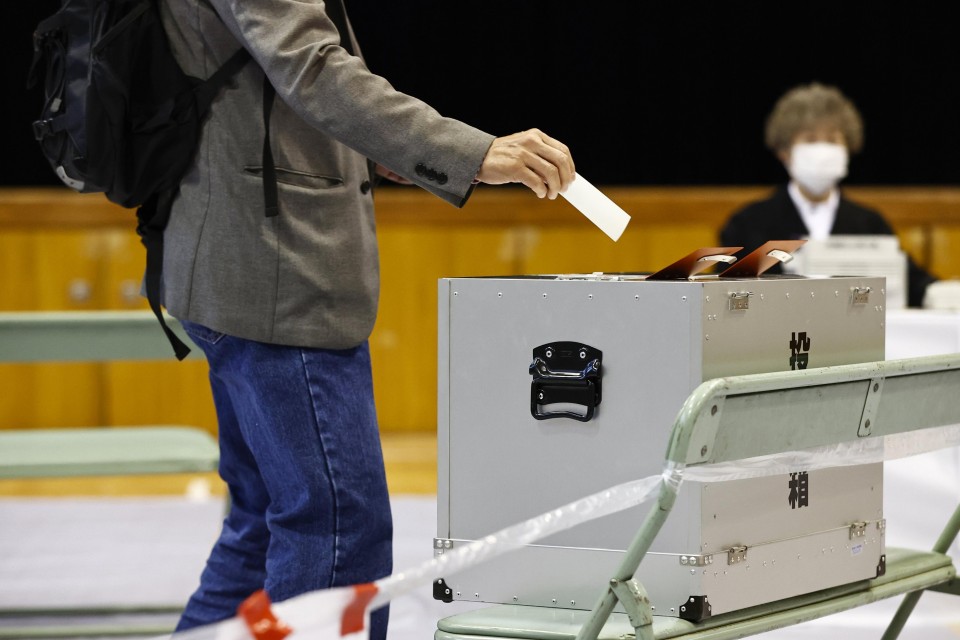 A vote is cast at a polling station in Osaka in a House of Representatives election on Oct. 31, 2021. (Kyodo) ==Kyodo

Kishida, who heads the ruling Liberal Democratic Party and took office on Oct. 4, has vowed to boost middle-class incomes.

Igarashi, 41, expressed hope that the government will move forward with economic policies that have been stalled due to the coronavirus outbreak.

Hideki Nakamura, a 46-year-old health care worker in Ome, western Tokyo, expressed frustration over how the government's past policy on reducing the number of hospital beds had led to a strain on the medical system amid the pandemic.

Hiromi Machida, a 54-year-old nursery worker, had high hopes for the policies pledged by the opposition camp.

"I feel the current government does not value people's lives," said Machida, as Yukio Edano, leader of the main opposition Constitutional Democratic Party of Japan, made his final appeal in Tachikawa, western Tokyo.

Machida particularly called for child-friendly policies that will be beneficial for everyone.

Hirohito Miyatani, a 46-year-old business owner in Takatsuki in Osaka Prefecture, western Japan, said he feels the Japanese economy has slowed down. "I hope politics will create a society in which my child can comfortably raise children."

Meanwhile, also in Takatsuki, Rie Fujii, a 20-year-old university student, urged lawmakers to implement policies on social welfare. She said she is interested in that issue "because you never know when you will need such support."

Survivors of the U.S. atomic bombings of the cities of Hiroshima and Nagasaki urged lawmakers to take more action to realize a world without nuclear weapons and provide support to those who suffered the effects of the attacks in August 1945.

"So many people only say things we want to hear ahead of an election, but they take no notice of us after getting elected. I want them to fulfill their responsibilities after being selected by the Japanese people," said Toshiyuki Mimaki, an acting director of an atomic bomb survivors group in Hiroshima Prefecture.

While Kishida's constituency is in the prefecture, Mimaki said he has the impression that the prime minister has taken a step backward in his commitment to the elimination of nuclear weapons since taking office.

"As hibakusha (atomic bomb survivors), we will need the help of all political parties. I want someone who has always kept in mind the people in the atomic-bombed areas and worked hard for them," the 79-year-old said.

In northeastern Japan, voters who survived the March 2011 earthquake, tsunami and subsequent nuclear disaster called for lawmakers to address issues faced by those who were forced to evacuate from their homes.

"When it comes to reconstruction, the emphasis seems to be on infrastructure," said Shinichi Kokubun, a 71-year-old who evacuated from Futaba, Fukushima Prefecture, due to the area's close proximity to the crippled Fukushima Daiichi nuclear power plant.

"I want politicians to listen closely to what kind of difficulties disaster survivors face," said Kokubun, who lives in public housing provided for evacuees in Iwaki in Fukushima.

Japan to make COVID-19 booster shots available to all eligible