Japan's new Prime Minister Fumio Kishida dissolved the House of Representatives on Thursday for an Oct. 31 general election that he said will set a course for the country's future as he seeks a public mandate for his government launched just last week.

The election must be held as the current term of lower house members expires on Oct. 21, and the Liberal Democratic Party led by Kishida is seeking to secure a majority with its coalition partner Komeito in the powerful chamber to better cope with COVID-19 and rejuvenate an economy damaged by it. 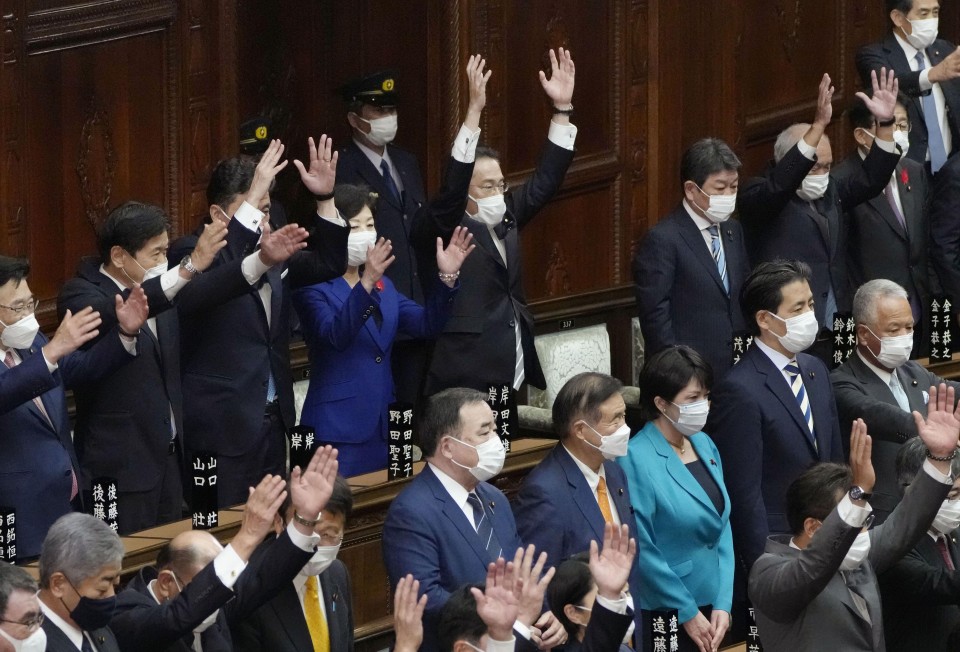 Japanese Prime Minister Fumio Kishida (5th from L in back row) and other lawmakers throw their arms in the air in a customary "banzai" as the House of Representatives is dissolved in Tokyo on Oct. 14, 2021, for a general election. (Kyodo) ==Kyodo

Opposition parties, still scrambling to form a joint front ahead of the election, are ratcheting up pressure on Kishida who they see as "inconsistent" on his policy agenda, after he backpedaled on his suggestion of raising the capital gains tax, which had hurt investor sentiment.

"We need to set a new formation of the House of Representatives through the election as soon as possible and accelerate work to make our major policy items more concrete," Kishida told a press conference.

"It is an election that will determine the future of Japan," he said, stressing that the country needs to build a new economic and social system for the post-COVID era.

"I would like to ask the people of Japan to choose the leader best able to make that future," said Kishida.

His remarks came after House of Representatives Speaker Tadamori Oshima announced the dissolution in a plenary session, prompting lawmakers of the lower chamber to stand up and shout "banzai" as they lost their seats. 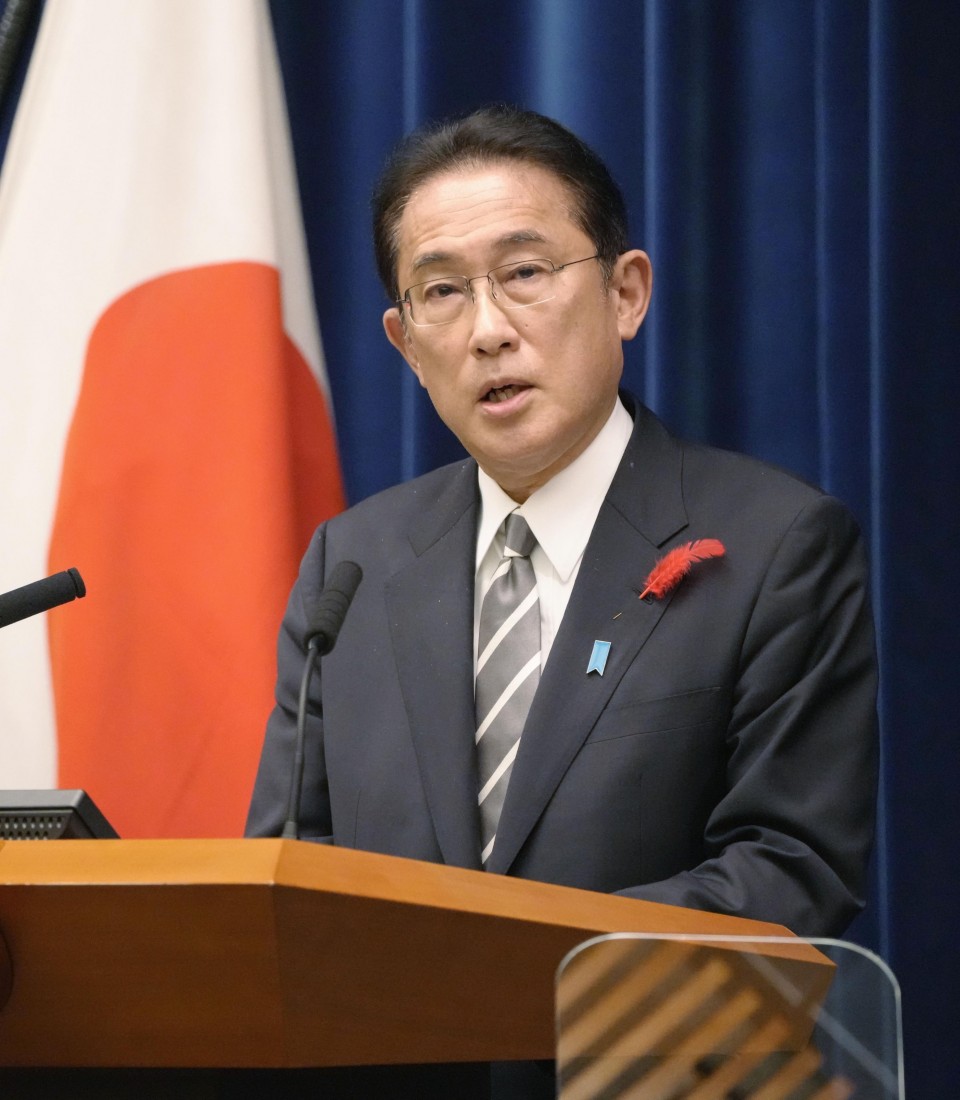 Japanese Prime Minister Fumio Kishida attends a press conference at his office in Tokyo on Oct. 14, 2021, after dissolving the House of Representatives earlier in the day for a general election at the end of October. (Kyodo) ==Kyodo

It is the first time in Japan's postwar history that a general election will be held after the lawmakers' term has expired and the shortest period between the dissolution of the lower house and voting day.

Kishida chose Oct. 31 as the best time for the election as the country has seen a clear downtrend in COVID-19 cases and he wants to avoid a political vacuum.

Ahead of the start of official campaigning next Tuesday, Kishida said the government will unveil an outline of steps against COVID-19 on Friday.

Kishida also gave a rough picture of an economic package worth "tens of trillions of yen" that will be compiled after the election. The prime minister said the package will include support for the domestic development and production of vaccines, and for Taiwan Semiconductor Manufacturing Co.'s plan to build a chip-making plant in Japan, highlighting his focus on the economic aspects of national security.

"The trend of the times is for the public and private sectors to work together to foster growth," Kishida said, adding it should not be driven solely by market forces or competition.

Opposition parties are aiming to become an alternative choice to the ruling coalition but Kishida's focus on redistribution is more or less in tune with what the opposition is promising to deliver.

They took aim at the government's slow handling of COVID-19, an issue that hurt public confidence in Kishida's predecessor Yoshihide Suga.

Yukio Edano, the leader of the main opposition Constitutional Democratic Party of Japan, criticized the ruling party's coronavirus response as "always running behind."

"The LDP cannot change. We need to change the government itself," Edano said.

Of the 465 seats in the lower house, the LDP and its coalition partner Komeito won 310 at the last election in October 2017. Kishida has said the ruling coalition is seeking to win at least 233 seats this time.

A Kyodo News poll last month showed 44.5 percent of the respondents were planning to cast ballots for the LDP in the proportional representation section, while 14.9 percent said they will vote for the CDPJ. 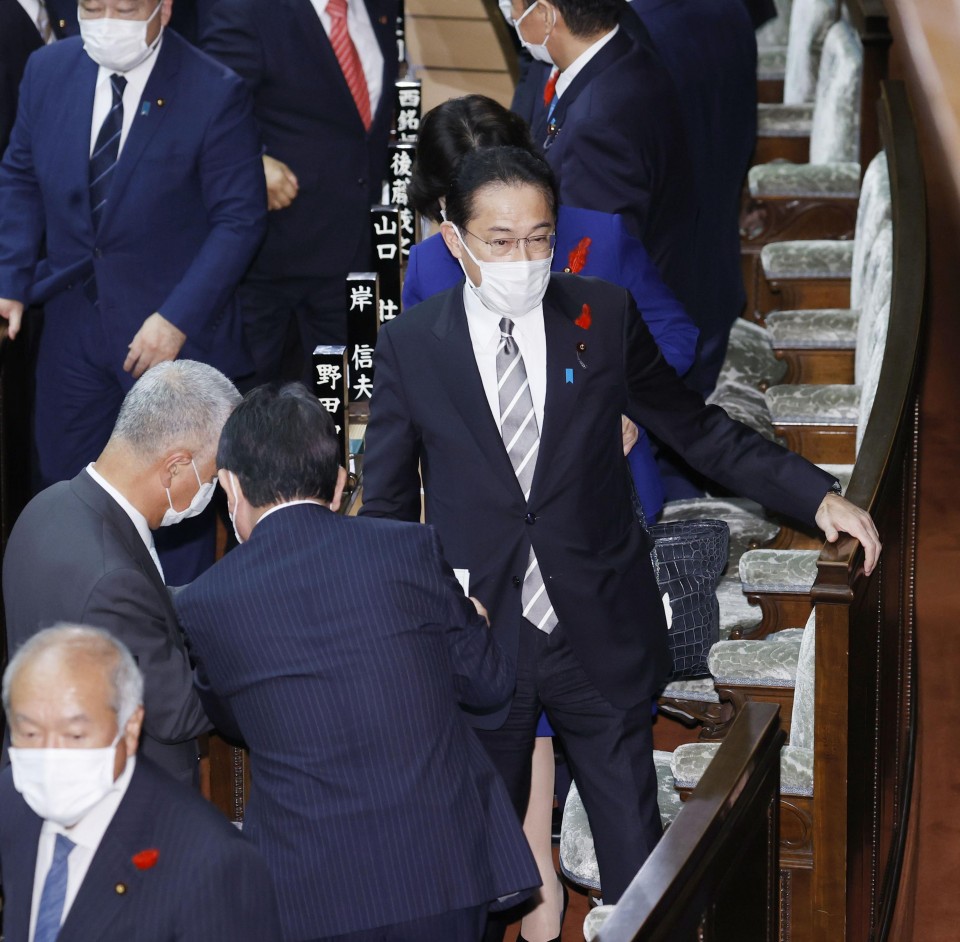 Japanese Prime Minister Fumio Kishida (C) leaves the chamber of the House of Representatives after the lower house was dissolved in Tokyo on Oct. 14, 2021, for a general election. (Kyodo) ==Kyodo

During the press conference, Kishida, who heads a liberal-leaning faction of the LDP, was asked whether the ruling parties will seek to secure two-thirds of the seats in the lower house, a threshold for any constitutional revision to be initiated.

Kishida is advocating what he calls a "new capitalism" and redistribution of the fruits of growth in an attempt to build a stronger middle class. But he has emphasized in recent days that Japan needs to first achieve an economic expansion.

On international relations, Kishida, who served as foreign minister, said after the election he would step up "in-person" diplomacy with the leaders of the United States and other nations as interpersonal trust is important.

He also revealed that the government is planning to review the current national strategy as well as defense guidelines and medium-term plans for securing defense equipment to reflect the changing security environment.

It remains uncertain whether Kishida can bring about a change as key posts in the new LDP leadership and his Cabinet were given to people with ties to party heavyweights and former prime ministers Shinzo Abe and Taro Aso, suggesting a radical policy shift from recent administrations is unlikely.

Despite expectations of an initial rise in popularity following the change in leadership, Kishida is not in the best shape as the approval rating for his Cabinet shortly after its launch stood at 55.7 percent in a Kyodo poll, short of the 66.4 percent for that of his predecessor Suga upon its formation in September last year.

To counter the LDP-Komeito coalition, the CDPJ and three other opposition parties -- the Japanese Communist Party, the Social Democratic Party and Reiwa Shinsengumi -- have been trying to join forces.

They came up with a set of joint pledges last month, including lowering the consumption tax and increasing taxes on the rich, while seeking to jointly back single candidates in constituencies in a bid to raise the chances of winning seats, although there are still areas in which they have yet to agree, such as candidates.

The CDPJ has stressed that Japan will not achieve steady economic growth and poverty reduction if there is no redistribution of wealth first.

The party vows to increase taxes on wealthy individuals and large companies while easing the burden on lower- and middle-income households.

The CDPJ is calling for a temporary lowering of the consumption tax from the current 10 percent to 5 percent and effectively exempting people who earn less than about 10 million yen ($88,200) annually from paying income tax.