Japan's ruling Liberal Democratic Party pledged Tuesday to bolster the middle class through "new capitalism" that focuses on economic growth and redistribution of wealth as it announced its campaign platform for a general election later this month.

Among seven other areas of its policy focus is strengthening economic security, an issue new Prime Minister Fumio Kishida is promoting amid intense competition over technology development between the United States and China. 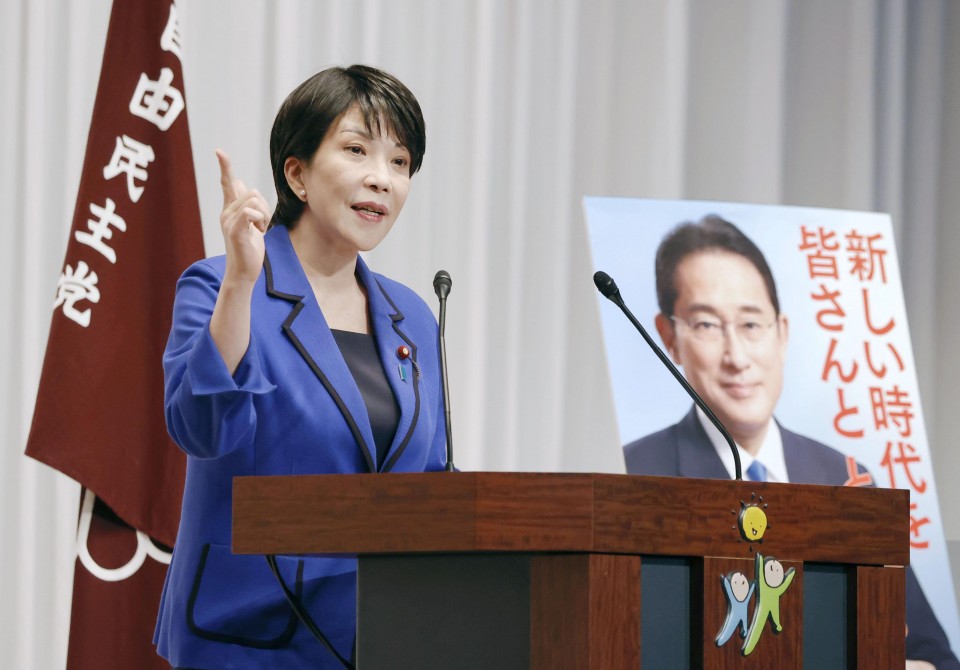 Sanae Takaichi, policy chief of Japan's ruling Liberal Democratic Party, announces the party's campaign platform in Tokyo on Oct. 12, 2021, ahead of the House of Representatives election on Oct. 31. (Kyodo)

The plan calls for a law advancing measures to prevent technology drain to overseas.

The campaign pledge for the Oct. 31 election also included enhancing measures against COVID-19 by facilitating vaccinations and providing financial aid to people hit hardest by the pandemic, including those without regular employment or raising children.

"I want to demonstrate policies to rise against the coronavirus pandemic and bring peace of mind and hope to the people," LDP policy chief Sanae Takaichi said at a press conference to unveil the campaign pledge.

The platform said the LDP will push forward debate on amending Japan's postwar Constitution, including the war-renouncing Article 9 to include a reference to the Self-Defense Forces.

The party will also protect Japan through diplomacy and enhanced defense capability by working with countries that share universal values such as democracy and promote the vision of a free and open Indo-Pacific region, according to the election pledge.

On the axis of the Japan-U.S. alliance, Tokyo will strengthen ties with countries and organizations that share values including Australia, India, the Association of Southeast Asian Nations and the European Union, it said.

Japan will welcome Taiwan joining the Trans-Pacific Partnership free trade framework and participating as an observer in the World Health Assembly, the decision-making body of the World Health Organization, according to the platform.

While the pledge includes tax support for companies willing to raise wages, it did not touch on reviewing the tax rate on capital gains and dividends, which Kishida had previously mentioned as an option to achieve the redistribution of wealth.

Yukio Edano, head of the main opposition Constitutional Democratic Party of Japan, criticized Kishida over the issue, saying at a party meeting Tuesday, "The prime minister has failed to carry out what he promised during the LDP presidential election and is wavering. The capital gains tax is a sign of this."

Kishida, who became prime minister on Oct. 4 after beating three rivals in an LDP leadership race last month, has said he will dissolve the House of Representatives on Thursday and call a general election at the end of the month.

The latest campaign platform underscored Kishida's emphasis on being accountable to and building trust with the public, apparently reflecting criticism over his predecessor Yoshihide Suga's communication skills.

Suga resigned after just over a year in office with his government's handling of the coronavirus pandemic eroding public support.