Fumio Kishida took office as Japan's prime minister Monday forming a Cabinet charged with keeping COVID-19 under control while reviving a battered economy, as he looks to appeal to voters heading into a general election in less than a month.

The election for the House of Representatives, the more powerful lower chamber of parliament, will be held Oct. 31, Kishida said, earlier than the first half of November as had been expected.

The 64-year-old former foreign minister replaced Yoshihide Suga, who resigned after just over a year in office amid criticism of his pandemic response.

<MORE ON THE ELECTION HERE>

"We need to fight the coronavirus to bring social and business activities back to normal and build a new economy, a new way of life, a new age. I want to work with the people toward that goal," Kishida told a press conference. "I will regain the trust of the people, which is the foundation of democracy."

The Cabinet includes a slew of fresh faces, with 13 of its 20 members taking on a ministerial post for the first time. But key posts were given to those with close ties to former Prime Minister Shinzo Abe, suggesting there will not be a radical shift in policy from previous administrations.

Kishida, who was chosen as leader of the ruling Liberal Democratic Party last week, was elected prime minister by a resounding majority in both chambers of the Diet. He was then formally invested with the title by Emperor Naruhito in a ceremony at the Imperial Palace. 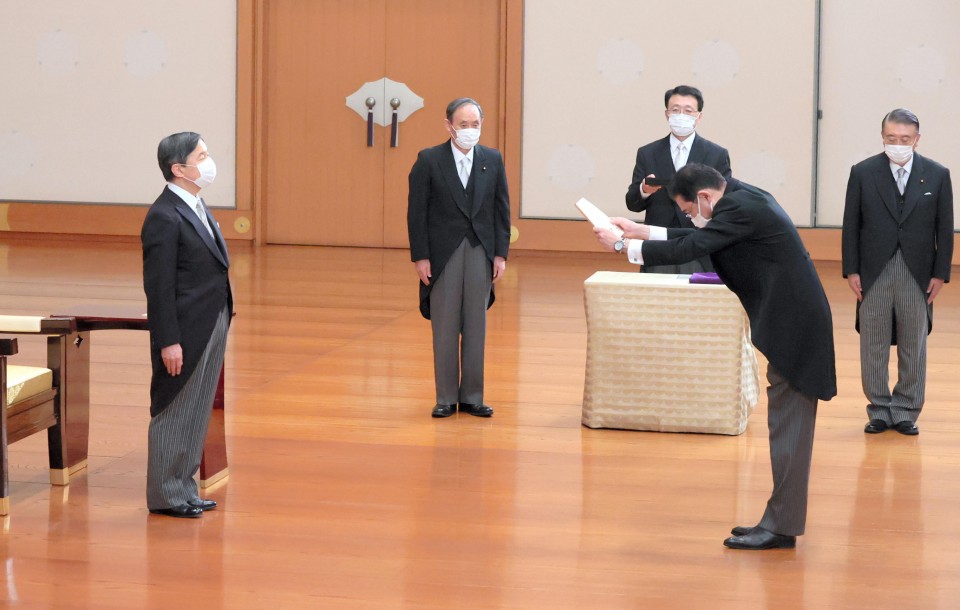 Kishida said he will spend the next several days delivering his first policy speech in the Diet and taking questions from other party leaders, then dissolve the lower house on Oct. 14 and begin the campaigning period for the general election on Oct. 19.

"I want to realize bold COVID-19 measures and an economic package as soon as possible," he said. "In order to do that, first the people need to decide whether I'm up to the job."

The vote will be his first major test in office, and he will need to defy his image as a low-key consensus builder who struggles to excite voters.

Previously expected to be held either Nov. 7 or 14, Kishida brought the general election forward in an apparent bid to capitalize on good will toward his just-launched government and a decline in COVID-19 cases, which on Monday fell below 100 in Tokyo for the first time this year. 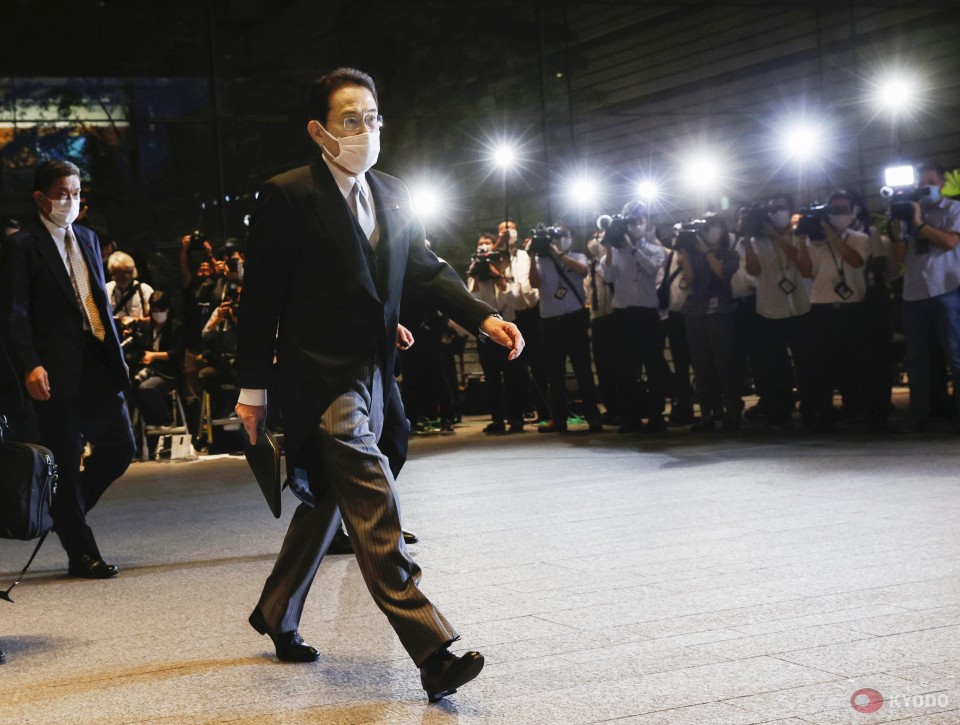 With around 60 percent of Japan's population fully vaccinated, Kishida's immediate task is preventing another surge in infections while gradually lifting restrictions on social and business activities, and reopening the world's third-largest economy to foreign travelers.

Touting a "new capitalism" that focuses on economic growth and redistributing the fruits of that success, he promised to boost middle-class incomes in a course correction from "Abenomics," which helped lift corporate earnings and stock prices but did little to spark wage growth.

Kishida has also vowed to draw up an economic package worth "tens of trillions of yen" within the year to deal with the pandemic, and said he is considering cash handouts to people hit particularly hard by COVID-19. 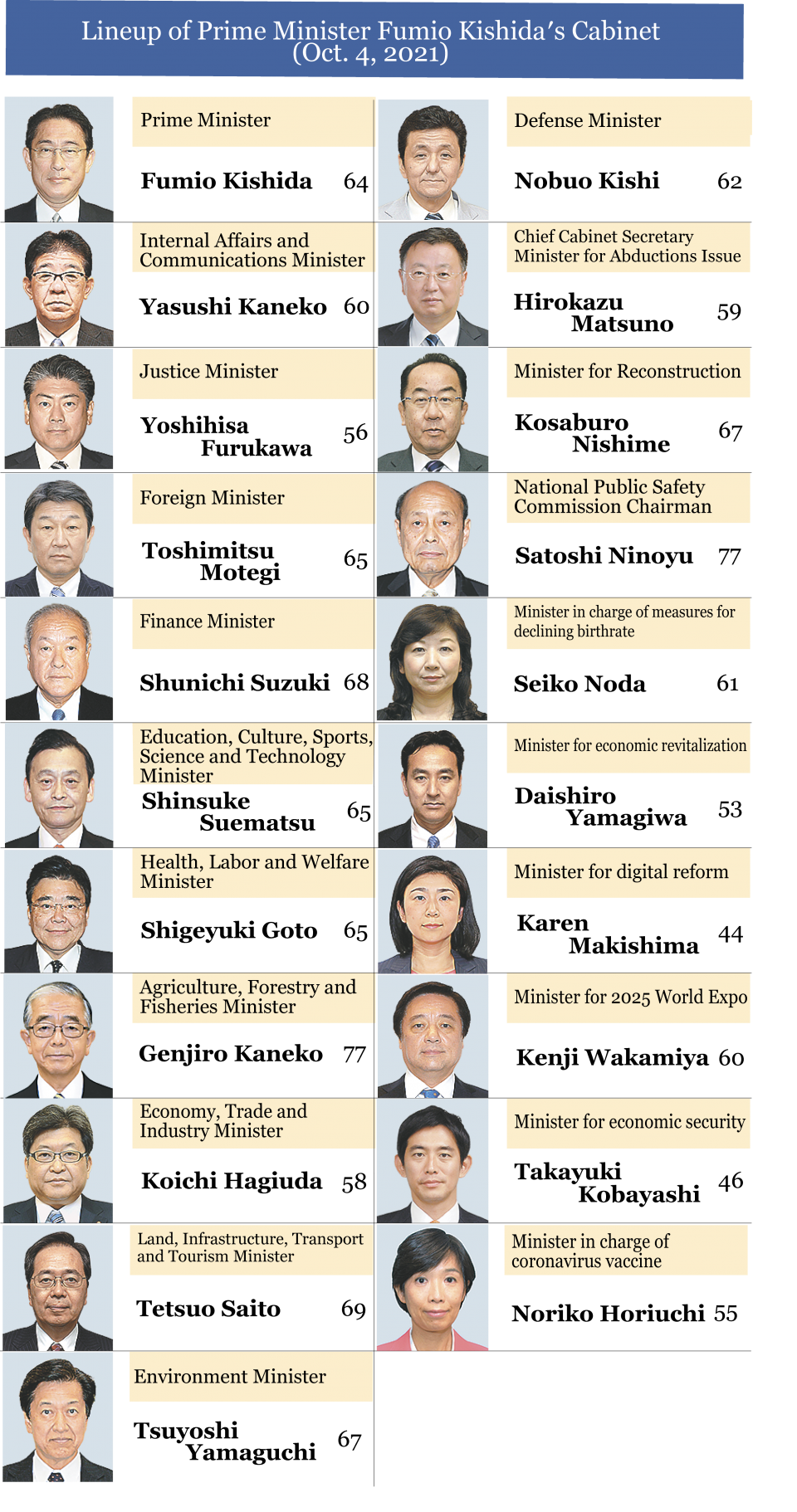 It is unclear how much social change there will be under Kishida, a moderate who has called for further debate on whether to allow married couples to retain separate surnames and who is "undecided" on whether same-sex marriage should be legally recognized.

Having ample international experience as foreign minister from 2012 to 2017, Kishida has his work cut out with a range of diplomatic and security challenges.

At the press conference, he promised to work with the United States to realize a "free and open Indo-Pacific" region and uphold fundamental values such as freedom, democracy and the rule of law.

Referring to China's assertiveness in the South and East China seas, Kishida said Japan will push back against "attempts to change the status quo through force." He also expressed doubt that China will be able to meet the standards to join the Trans-Pacific Partnership free trade deal.

Kishida, who also briefly served as defense minister, vowed to shore up missile defenses following North Korea's recent resumption of ballistic missile tests, while saying he is willing to meet with leader Kim Jong Un "without preconditions" to resolve the issue of the country's past abductions of Japanese nationals.

Hailing from a political family in Hiroshima, Kishida has promised to push forward efforts to rid the world of nuclear weapons while arguing that Japan should consider giving the Self-Defense Forces the capability to conduct missile strikes on hostile enemy bases. 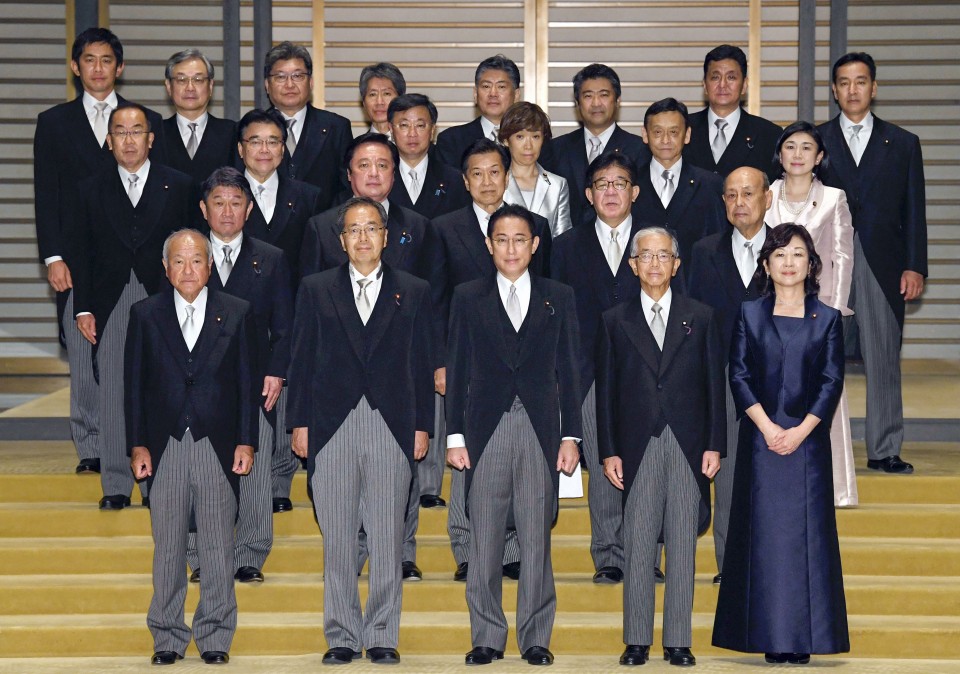 Many of the Cabinet members belong to one of the LDP factions that backed Kishida in the leadership race. Koichi Hagiuda, a close ally of the staunchly conservative Abe, was named trade and industry minister, while Daishiro Yamagiwa, a member of the Aso faction, was tapped for economic and fiscal policy minister.

The average age is relatively high at 61.8 and there are only three women -- vaccination minister Noriko Horiuchi, Seiko Noda, the minister in charge of gender equality and children's policies, and administrative reform minister Karen Makishima, the youngest pick at 44. 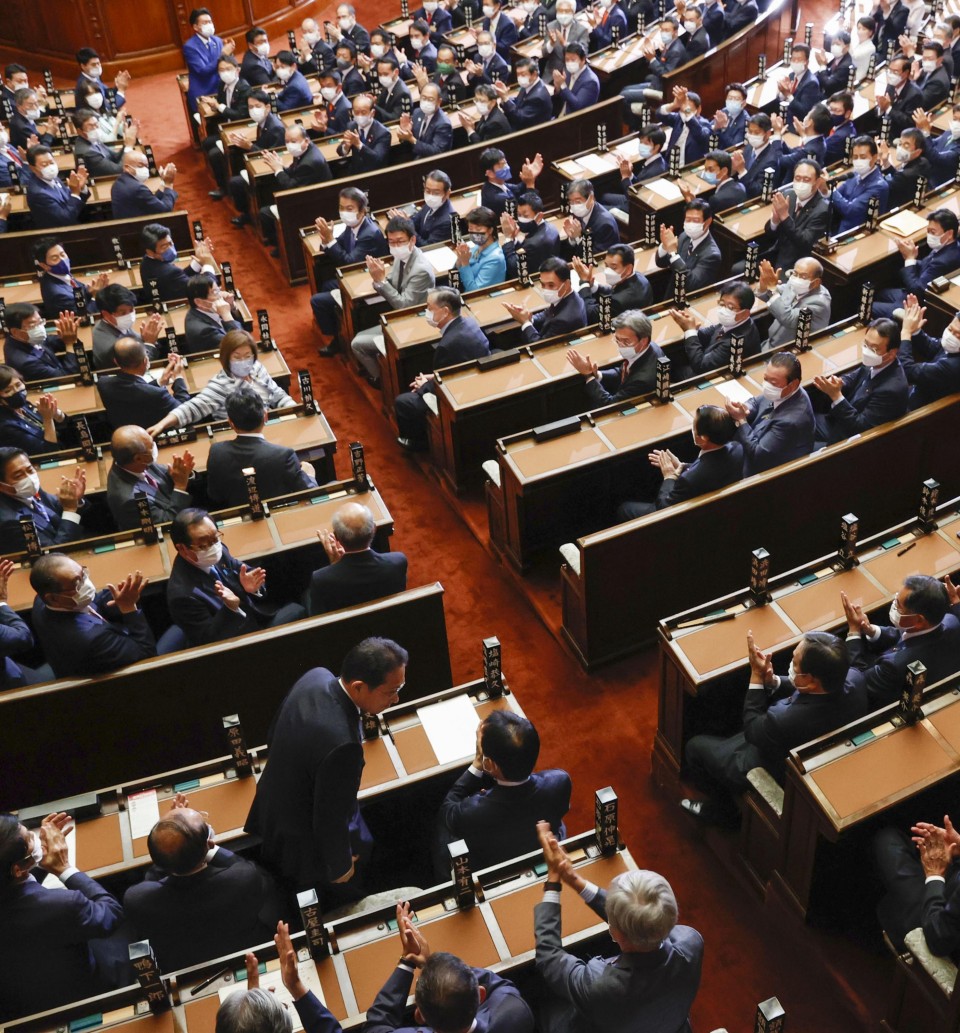 Suga's Cabinet resigned en masse Monday morning, 384 days after its formation, giving him the 12th shortest tenure of the 34 prime ministers in the postwar era.

Repeated COVID-19 states of emergency and poor policy communication sent his Cabinet's approval ratings plummeting, with the Tokyo Olympics and the quickening pace of vaccinations doing little to buoy sentiment. 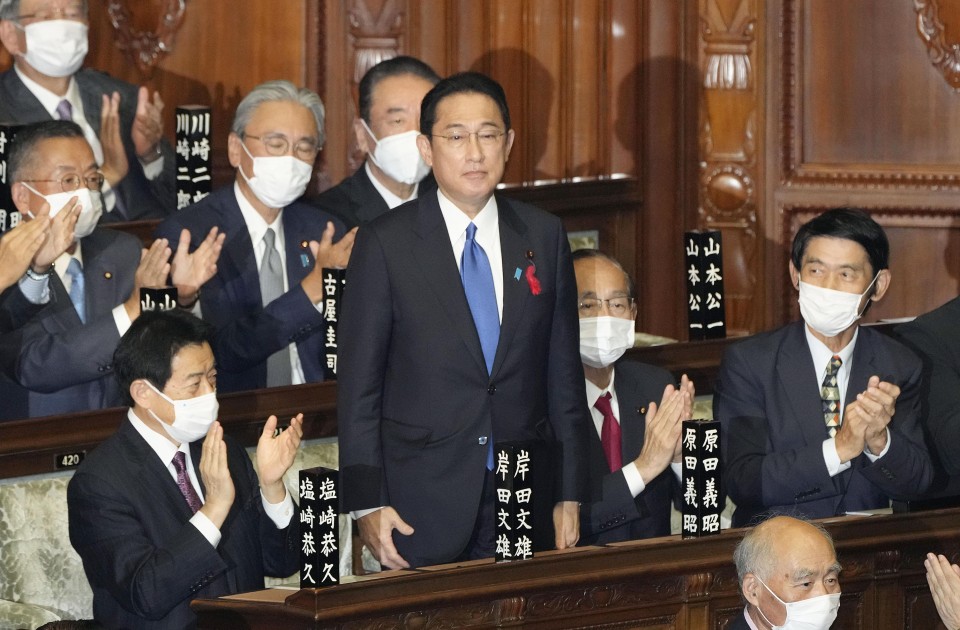 Fumio Kishida (C), the new leader of Japan's ruling Liberal Democratic Party, stands up after being elected prime minister during a House of Representatives plenary session in Tokyo on Oct. 4, 2021. (Kyodo) ==Kyodo

The Diet convened an extraordinary session in the afternoon to choose a successor. The vote was little more than a formality as the ruling coalition of the LDP and junior partner Komeito has a majority in both chambers.

The general election will be key to avoiding a fate similar to Suga, though its timing means Kishida will be unable to travel to Rome at the end of the month to take part in a Group of 20 summit. 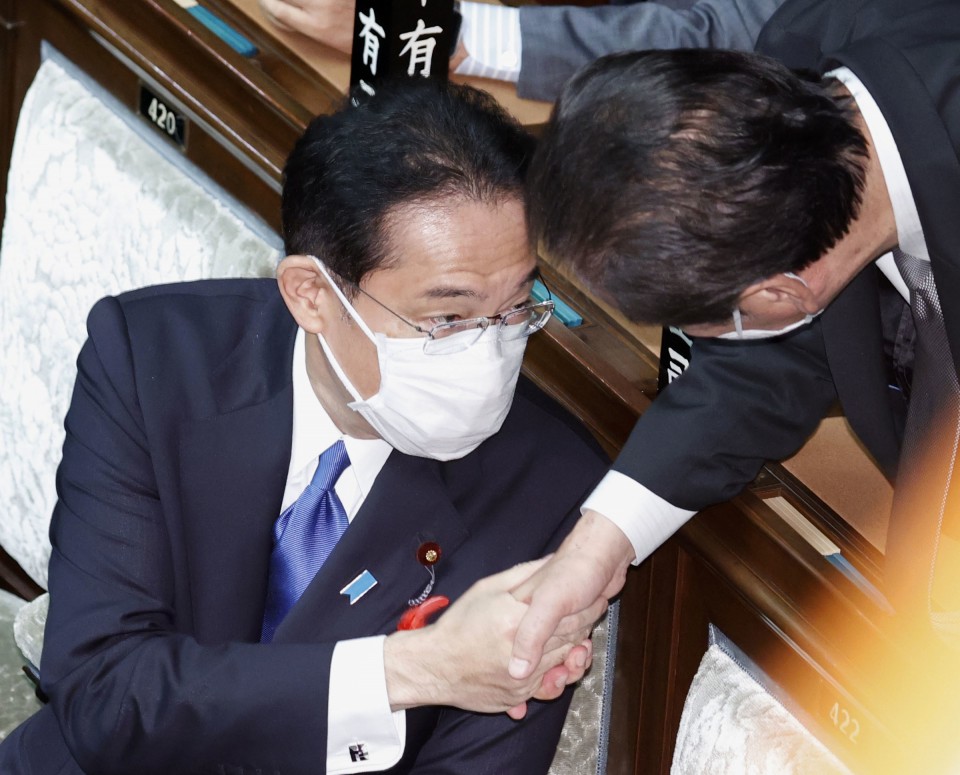 Fumio Kishida (L), the new leader of the ruling Liberal Democratic Party, is pictured in the parliament on Oct. 4, 2021. (Kyodo)