Japan will hold a general election on Oct. 31, Prime Minister Fumio Kishida said Monday, going to the polls earlier than expected in the apparent hope of capitalizing on an anticipated popularity bump after assuming office and the improving COVID-19 situation.

Kishida, who was elected prime minister by parliament earlier in the day, said he will dissolve the House of Representatives on Oct. 14, the final day of an extraordinary Diet session, setting the stage for election campaigning to start on Oct. 19.

Uncertainty over the COVID-19 situation and the risk of a political vacuum after the Oct. 21 end of the current four-year term of lower house members were behind the decision, the 64-year-old leader said.

"It's necessary to hold the general election as soon as possible and obtain a fresh mandate to lead national politics," Kishida said during his inaugural press conference as prime minister.

Kishida said he hopes to implement "bold" steps to fight COVID-19 and a fresh economic stimulus package after making sure that the people of Japan want to entrust him with the job. The size of the to-be-compiled package has been put at "several tens of trillions of yen."

"I will create a government based on trust and empathy," said Kishida, who won the ruling Liberal Democratic Party's presidential race last week. 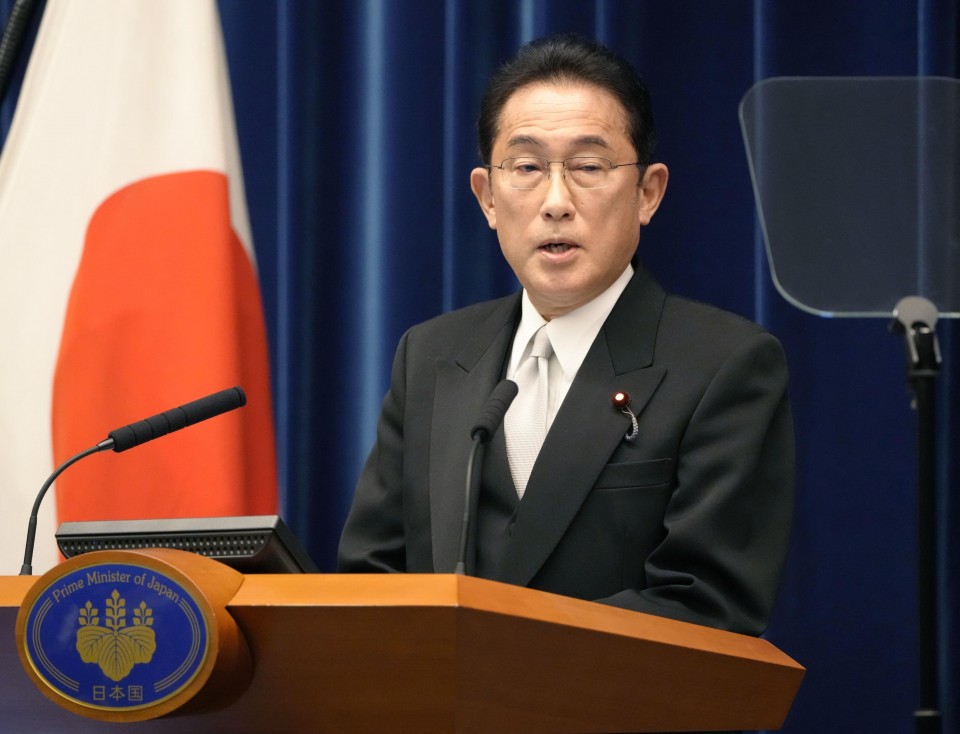 Japan's new Prime Minister Fumio Kishida attends his first press conference after the inauguration of his Cabinet at his office in Tokyo on Oct. 4, 2021. (Kyodo) ==Kyodo

The election must be held by late November and it is the first time under the current Constitution that a lower house election will be held after the end of members' terms.

The upcoming race will be held with Japan free of a COVID-19 state of emergency for the first time since April as vaccinations have progressed and the infection situation has stabilized.

But Kishida cautioned, "The outlook is uncertain and there are still many people worried about COVID-19."

In fixing the election date, Kishida also took into account the planned marriage on Oct. 26 of Princess Mako and her boyfriend Kei Komuro, sources with knowledge of the prime minister's thinking said.

The Oct. 31 election was considered off the table in the LDP as it is not an auspicious day according to the traditional Japanese calendar, so the decision caught some lawmakers off guard.

But Kishida told his aides on Sunday "the sooner the better," getting ready for his gambit, according to an LDP source.

"We have no choice but to go straight into the election," said a senior lawmaker of Komeito, the LDP's coalition partner.

Opposition parties are concerned about a potential rebound in public support for the LDP after its change of leader.

"(Kishida) is forcing it through but we will take up the challenge," Jun Azumi, the Diet affairs chief of the major opposition Constitutional Democratic Party of Japan, said of the decision to quickly go to the polls.

"He dominated media coverage throughout the (LDP) presidential election and is now attempting to call an election before his true nature is revealed," Azumi said.

The opposition party is struggling to differentiate itself from Kishida, who has vowed to place priority on wealth redistribution -- a goal advocated by the CDPJ -- so ordinary people can share the benefits of growth.

Now that the election date has been fixed, the opposition parties will step up work to unify their candidates in single-seat constituencies to avoid splitting the vote against ruling party candidates.

The LDP-Komeito coalition holds a majority in the powerful lower house and Kishida has said he will aim to maintain that in the upcoming election.

Kishida's Cabinet lineup unveiled Monday reflects his efforts to strike a balance among LDP factions to ensure a stable government, giving many posts to allies of former Prime Minister Shinzo Abe, the longest-serving Japanese leader who remains a power broker in the party.

Preparations had been under way for Kishida, a former foreign minister, to make his diplomatic debut as prime minister at a summit meeting of the Group of 20 advanced and emerging economies on Oct. 30 and 31 in Rome, Italy, but he will skip the gathering in person, according to sources familiar with the plan.

Kishida said at the press conference that he will join the G-20 summit, as well as U.N. climate change talks in Glasgow, Scotland, on Nov. 1 and 2 when leaders are scheduled to meet, virtually if possible. 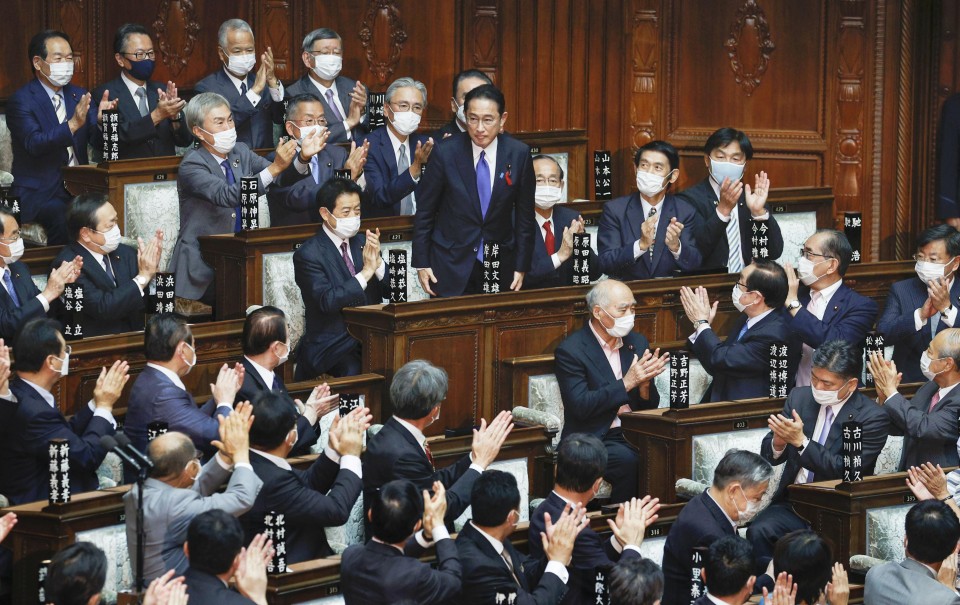 Fumio Kishida (C), the new leader of Japan's ruling Liberal Democratic Party, stands up after being elected prime minister during a House of Representatives plenary session in Tokyo on Oct. 4, 2021. (Kyodo) ==Kyodo

U.S. seeks to work with next Japan PM on Quad: Pentagon official