China's major holiday began Friday, as the world's second-biggest economy has been facing a serious electricity shortfall with the leadership of President Xi Jinping bolstering measures to curb climate change.

More than 650 million trips are expected to be made in China during the holiday amid easing concern about the novel coronavirus outbreak, but fears are growing that the brunt of the power shortage will deal a heavy blow to the country's recovering economy. 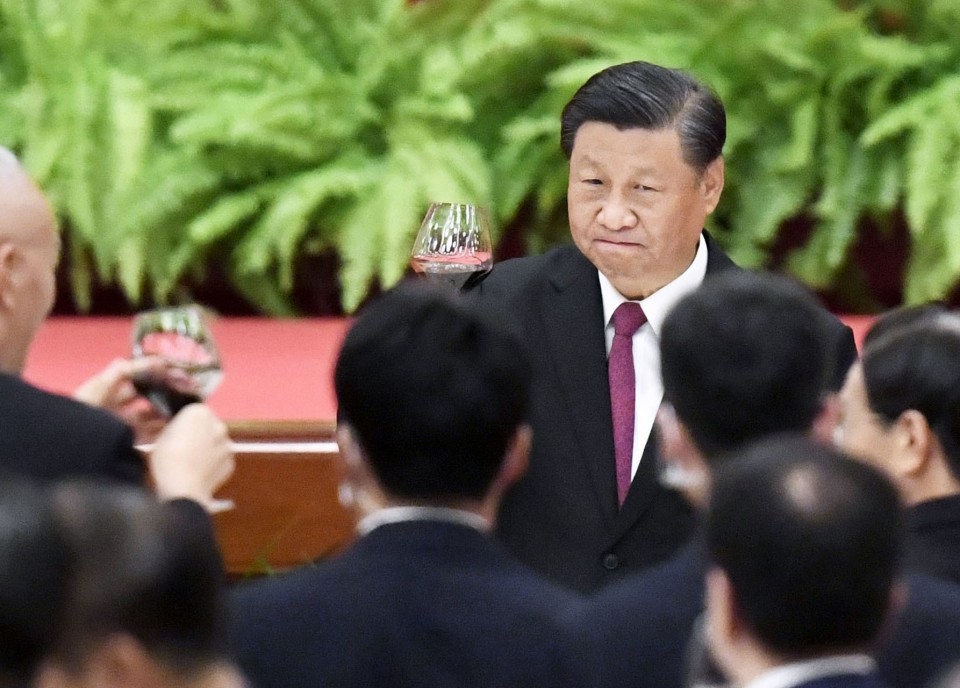 President Xi Jinping raises a glass at a reception to celebrate China's major Golden Week holiday in Beijing on Sept. 30, 2021, the eve of the weeklong break. (Kyodo)

The Global Times, a tabloid of the ruling Communist Party, has reported that several regions in China, including Shenzhen, a special economic zone, have introduced steps to save electricity on the holiday occasion through next Thursday.

In Shenzhen, large-scale light shows will be suspended for the seven days, the newspaper said, adding local authorities have pledged to strive to ensure power supply during the period when many people are set to enjoy traveling and leisure activities such as shopping.

Xi has promised China will attain a peak in carbon dioxide emissions before 2030 and aim to become carbon neutral by 2060.

In China, however, government regulations on energy consumption, as well as a hike in coal prices, have been forcing a number of factories to suspend their operations, eroding corporate performance of the nation's smaller companies.

A business organization in China has urged the Communist-led government to take measures to stabilize material prices and provide steady electricity supply.

Since the increase in new infections apparently peaked in late February last year, China, dubbed the "world's factory," has shown signs of a V-shaped economic recovery with investment and retail sales bouncing back.

The country's economy grew 7.9 percent from a year earlier in the April-June period, after posting its sharpest quarterly expansion on record, up 18.3 percent, in the first three months of 2021. China was also the only major economy to attain positive growth last year.

But the economic outlook has become gloomy against a backdrop of the recent power crunch and mounting worries about a potential default of property developer China Evergrande Group, whose liabilities have swelled to around 2 trillion yuan ($310 billion).

Last year, over 600 million trips are believed to have made in China for the same holiday in October, highlighting that the coronavirus has been brought under control at home.

In 2019, China staged a huge military parade in Beijing as part of its celebrations marking the 70th anniversary of Communist rule dubbed "National Day," a key holiday on China's political calendar.