An apparent plea bargaining between China and the United States late last week signals that the world's two major powers may be trying to prevent their economic and security tensions from escalating further, diplomatic sources said.

A possible change in Sino-U.S. ties could also force Japan to reconsider its diplomacy toward China, as the government of Prime Minister Yoshihide Suga has just followed suit with Washington on regional issues including Taiwan, the sources added.

On Friday, the chief financial officer of Chinese tech giant Huawei Technologies Co., Meng Wanzhou, who admitted to fraud charges, was released by Canadian authorities around three years after she was detained in Vancouver on behalf of the United States. 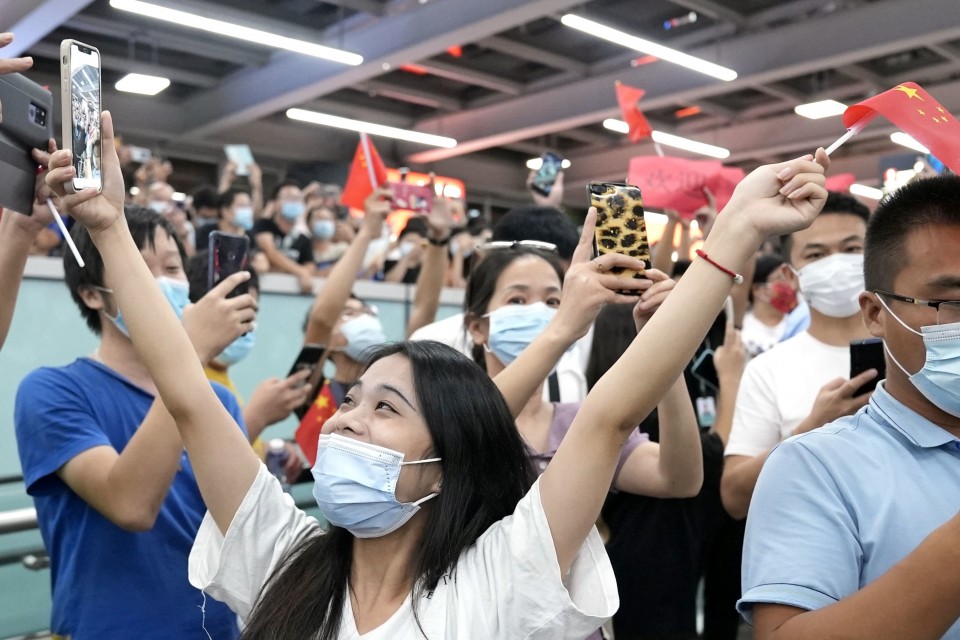 The move by the U.S. Justice Department came as President Joe Biden, who has been criticized for having triggered political confusion in Afghanistan, said in a U.N. speech last week, "We are not seeking a new Cold War or a world divided into rigid blocs."

Immediately after the release of Meng, the daughter of Huawei's founder, Ren Zhengfei, two Canadians detained in China on espionage were discharged from prison. The detention of the two men had been regarded as Beijing's retaliation for Meng's arrest.

Such developments indicated China and the United States have been willing to improve their ties, as they are believed to be "tired" of continuing an "endless battle" that could eventually harm the global economic and security order, one of the sources said.

In the wake of the bargaining, Beijing and Washington are expected to begin "full-fledged preparations" for the first direct summit between Xi and Biden, who took office in January, he said.

Should the two nations start to aim at a thaw in their relations, Japan, one of the closest U.S. allies in the world, would have to map out a new strategy on how to get along with its neighbor that has been irritated by Suga's interference in Taiwan affairs.

At their summit in Washington in April, Suga confirmed with Biden "the importance of peace and stability across the Taiwan Strait." It marked the first time in 52 years that Japanese and U.S. leaders have mentioned Taiwan in a joint statement.

A scholar familiar with Sino-Japanese ties said, "Taiwan is a core interest of China. Japan has suddenly meddled in the issue since Biden became the U.S. president. China has been reluctant to maintain the positive momentum in relations with Japan."

"As long as China cannot get a clue to ease strains with the United States, it would extend an olive branch to Japan, which may work as a broker between the two countries. But if it judges it unnecessary to do so, Japan-China ties would worsen," he said.

In Japan, Suga, who has served as prime minister for about one year, will be replaced in October. His policy toward China has resembled a tool for bolstering Japan's security relations with the United States, frustrating the Communist-led government, the scholar said.

Meng's release "could be a turning point in U.S.-China ties. Japan's next prime minister should hammer out a well-balanced diplomatic strategy toward China, while keeping a close eye on how U.S.-China relations would develop ahead," he said.

A deterioration of China-Japan ties would have a "bigger and more direct impact on peace and stability in the Asia-Pacific region than those between the United States and China," the scholar said.

"So far, it seems that Japan has not come up with its own concrete and practical strategy on how to deal with issues surrounding China's regional and global assertiveness. This is dangerous," he added.

In December 2018, Canada arrested Meng at the request of the United States, which accused her of helping Huawei evade U.S. sanctions on Iran. Her detention became one of the sources of tension between Beijing and Washington.

As Huawei is known as a leader in the field of next-generation 5G mobile communications, former U.S. President Donald Trump, Biden's predecessor, imposed export restrictions on products of the Chinese company on security grounds.

When she arrived in the southern Chinese city of Shenzhen from Vancouver on Saturday night on a charter flight, Meng, clad in a red dress, stepped out of the cabin, with the crowd waving national flags and chanting "welcome home."

"President Xi Jinping cares about the safety of each and every Chinese citizen, including me. I am deeply moved," Meng was quoted as saying in front of the crowd by the official Xinhua News Agency.

The Global Times, a tabloid of the ruling Communist Party, hailed Meng's release, ironically saying on Sunday, "A detente in the China-U.S. relationship will bring no less benefit to the U.S. than to China."

"The Biden team may have felt that it is unable to comprehensively contain China, and intended to contract some fronts of conflict with China," the newspaper added.

On Friday, meanwhile, the leaders of the United States, Japan, Australia and India showcased their deepening ties in the face of China's rise, at their first in-person summit in Washington of the group of major Indo-Pacific democracies.

Their joint statement issued after the meeting, however, made no direct reference to China. Beijing also did not release a statement condemning the Quad soon after the summit, although it had done so following previous gatherings by the group.