Kishida, who has declared his candidacy in the ruling Liberal Democratic Party's leadership race on Sept. 29, also said he will create the post of special adviser to the prime minister on human rights issues if elected. 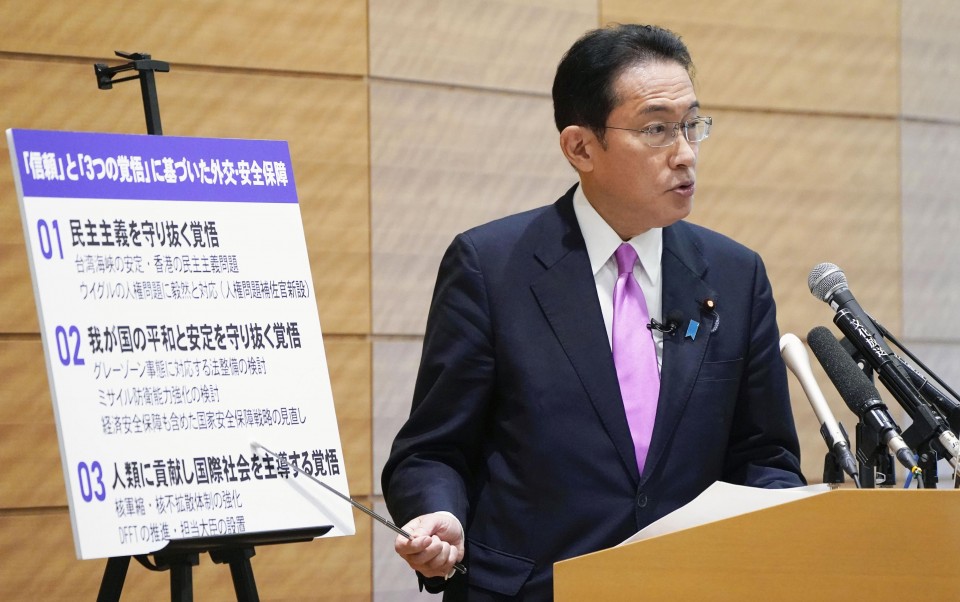 Former Japanese Foreign Minister Fumio Kishida, a candidate in the Liberal Democratic Party presidential election, announces his foreign and security policy at a press conference at the parliament building in Tokyo on Sept. 13, 2021. (Kyodo) ==Kyodo

The special adviser would deal with China's alleged human rights abuses against the Muslim Uyghur minority in the far-western Xinjiang autonomous region as well as its crackdown on Hong Kong's pro-democracy movement, he said.

The contest, for which campaigning starts Friday, comes after Suga abruptly announced his intention to resign as his government's public support plunged amid dissatisfaction with its COVID-19 response.

Kishida's policy is in line with U.S. President Joe Biden's call for a multilateral approach to put pressure on China and similar to the stance adopted by the Suga administration.

Like Suga, Kishida emphasized the importance of ensuring peace and stability across the Taiwan Strait, where tension is rising.

China sees Taiwan, a self-ruled democratic island, as a renegade province to be reunited with the mainland by force if necessary.

Calling China's "Belt and Road" project to develop infrastructure and trade across Asia, Europe and Africa as a move to expand its influence, Kishida said Japan is "on the front line in the international confrontation of values" between democratic and undemocratic countries.

"China must act appropriately and show responsibility to match its status as a global power," he said, vowing to deepen the Japan-U.S. alliance and Tokyo's strategic ties with Europe, Australia, India and others that share "common fundamental values" to counter Beijing.

Concerning a recent operation to evacuate people from Afghanistan, Kishida indicated his intention to amend legislation on the rescue of Japanese nationals abroad, as the current law limits the Self-Defense Forces to carrying out evacuations from a "safe place."

SDF personnel were dispatched to the region to evacuate around 500 people wishing to leave Afghanistan following the Taliban's return to power, including locals who worked for Japanese agencies, but the troops only evacuated one Japanese as well as 14 Afghans by the end of their mission on Aug. 31.

"Many people felt legal provisions that areas (of operation) must be safe were inconsistent" with the reality on the ground, he said.

Kono said if he becomes prime minister, he wants to "consolidate" the party ahead of a general election this fall, Ishiba told reporters afterward, adding he will decide whether to enter the race soon.

Some Ishiba allies are pessimistic about his chances after placing third in last September's LDP leadership race and are pushing for him to back Kono instead.

The previous day, Takaichi, the only female candidate so far, reiterated her intention to continue visiting Yasukuni shrine in Tokyo even if she becomes prime minister, which would likely spark criticism from China and South Korea as they see it as a symbol of Japan's past militarism.