New yokozuna Terunofuji got off to a winning start Sunday at the Autumn Grand Sumo Tournament, but ozeki Shodai and Takakeisho both suffered upset losses in their opening bouts.

The 29-year-old Terunofuji fell short of a third straight championship in July in Nagoya, but his 14-1 record was enough to earn him promotion to sumo's highest rank. Picking up where he left off, he claimed a fast force-out win over komusubi Ichinojo at Ryogoku Kokugikan. 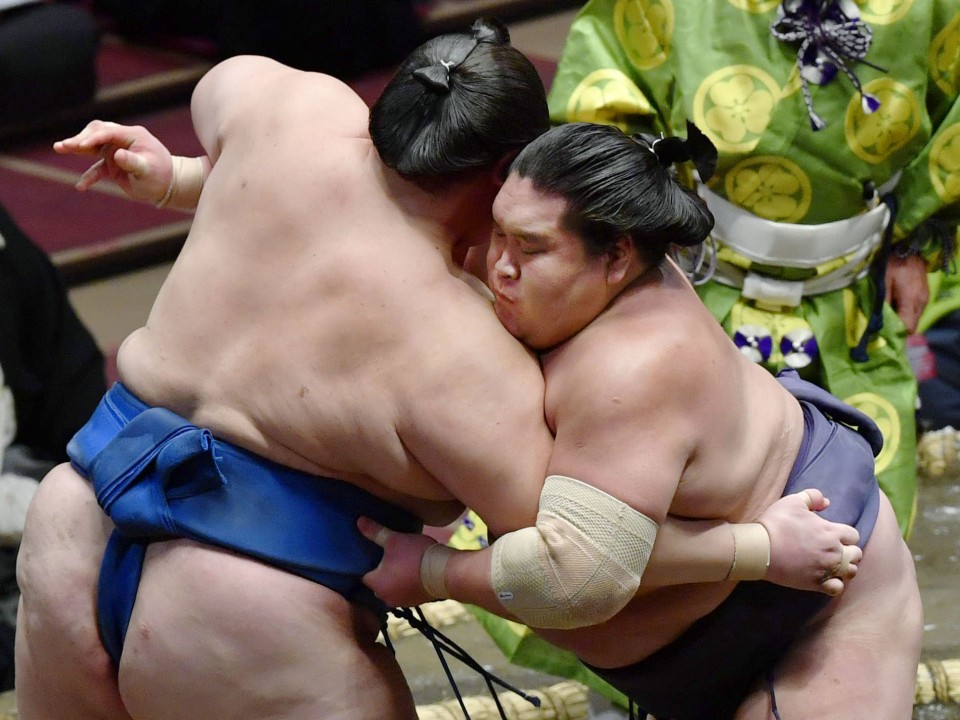 Terunofuji, who acquired his Japanese citizenship in early August, quickly got a left overarm belt hold against the giant komusubi and drove forward to end the bout in a matter of seconds.

With the sport's only other grand champion, Hakuho, sidelined due to COVID-19 cases at his stable, Terunofuji is the firm favorite to win his fifth career Emperor's Cup at the 15-day meet.

It would be another accolade in an already remarkable career for the Mongolian-born grappler, whose knee injuries and other health issues saw him drop from the second-highest rank of ozeki to fifth-tier jonidan before an unprecedented comeback.

The two ozeki hoping to challenge him for the title were far from their best on the opening day.

Shodai fell victim to No. 1 maegashira Hoshoryu, nephew of former Yokozuna Asashoryu, who put on an impressive performance to make it three head-to-head wins out of three against the ozeki.

Shodai relied on his size advantage to drive Hoshoryu quickly to the edge, but the rank-and-filer kept his ground and launched a sharp counter to steer his opponent all the way to the opposite side for a force-out win.

Takakeisho also made a lackluster start to the meet, his weak pull-down attempt allowing No. 2 Hokutofuji to seize the initiative and force him out of the raised ring.

Having pulled out of the Nagoya meet with a neck injury, the demotion-threatened "kadoban" ozeki needs a winning record here to maintain his rank.

Sekiwake Mitakeumi, meanwhile, showed his impressive capabilities in a push-out win over No.1 Takanosho. The two-time grand tournament winner powerfully forced Takanosho onto the back foot from the jump before sealing the win with a second drive.

New sekiwake Meisei was unable to make a winning start despite his sharp initial charge against energetic No. 2 Kiribayama. In a whirlwind encounter, Meisei lost his footing while evading his opponent and succumbed to a slap down.

Komusubi Takayasu also opened the meet on a losing note, the former ozeki unable to rattle No. 3 Wakatakakage before he was crushed out near the edge.

The Japan Sumo Association has capped the number of spectators at 5,000, half the capacity of Ryogoku Kokugikan. The capital is under a COVID-19 state of emergency until the end of the month. 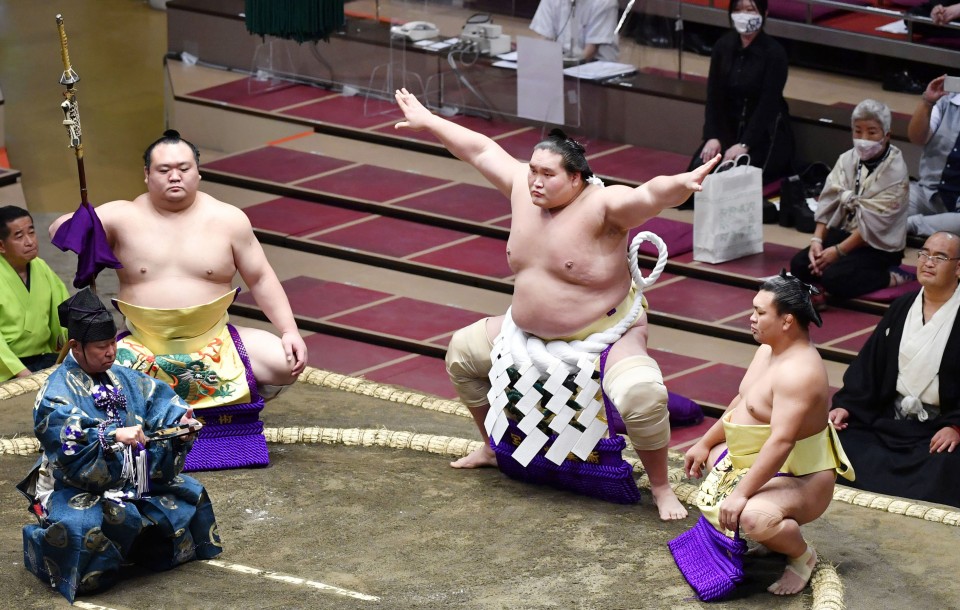