The global economy has recovered to a level seen before the coronavirus pandemic, the Organization for Economic Cooperation and Development said Tuesday, while noting unevenness among nations in the pace of recovery and a downside risk amid the spread of the Delta variant.

The world's gross domestic product "has now surpassed its pre-pandemic level, but output and employment gaps remain in many countries," the OECD said in its latest interim economic outlook, which projected global GDP to grow 5.7 percent in 2021, after shrinking 3.4 percent last year.

The estimated figure by the Paris-based club of 38 mostly wealthy nations was slightly downgraded from a 5.8 percent increase projected in the previous report in May. It expects the world economy to keep growing in 2022, forecasting a 4.5 percent increase, revised up 0.1 percentage point.

By country, Japan continued to be predicted to see the worst GDP growth among the Group of Seven advanced nations. Its economy is seen growing 2.5 percent in 2021, down 0.1 point from the previous projection, and 2.1 percent in 2022, up 0.1 point.

The recovery gaps are pronounced "in emerging-market and developing economies where vaccination rates are low," the OECD said, stating that the GDP figures in the second quarter of 2021 compared with the fourth quarter of 2019 were up around 9 percent in Turkey and China, but down over 6 percent in India and Spain.

The OECD said the economic fallout from the highly contagious Delta variant has "so far been relatively mild" in countries where the vaccination rate is high.

But the economic impact of the variant has "lowered near-term momentum elsewhere and added to pressures on global supply chains and costs," apparently referring to recent massive production suspensions in Southeast Asia that led to supply chain disruptions.

The report said the spread of the Delta variant forced many countries, "particularly in the Asia-Pacific region where vaccination rates have been relatively low," to introduce fresh containment steps.

Meanwhile, the OECD maintained its fundamental assessment of the outlook for the world economy, saying, "Economic growth has picked up this year, helped by strong policy support, the deployment of effective vaccines and the resumption of many economic activities." 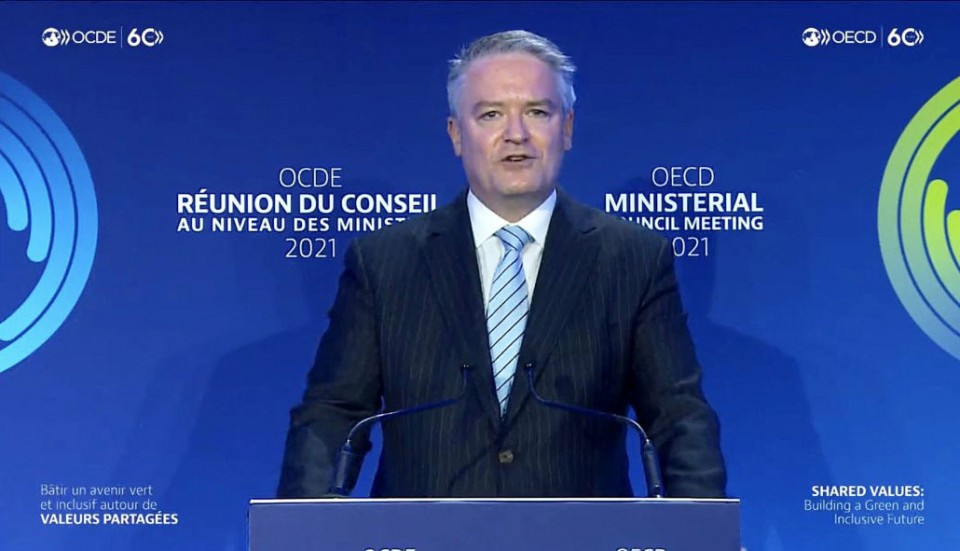 Mathias Corman, secretary general of the Organization for Economic Cooperation and Development. (Kyodo)

"The world is experiencing a strong recovery thanks to decisive action taken by governments and central banks at the height of the crisis," OECD Secretary General Mathias Cormann said in a press release.

"Ensuring the recovery is sustained and widespread requires action on a number of fronts -- from effective vaccination programs across all countries to concerted public investment strategies to build for the future," he added.

The organization said the Delta variant and other negative factors such as supply constraints are expected to "unwind over the time," with shortfalls in growth in the latter half of 2021 to be made up through "faster recoveries" next year.

Estimates for the Chinese economy were unchanged, as the OECD said the country is expected to grow 8.5 percent in 2021 and 5.8 percent in 2022.

The report also mentioned that inflation has "risen particularly quickly in recent months" in countries such as the United States, Canada and Britain, all of which saw a relatively large downgrading for 2021 economic growth.

FOCUS: China's economy may weaken as Communists put themselves in quandary