Japan's economy in the April-June period grew a real 0.3 percent from the previous quarter, or an annualized 1.3 percent, as robust exports were overshadowed by sluggish consumption under a state of emergency over the coronavirus pandemic, government data showed Monday.

It was the country's first increase in real gross domestic product, the total value of goods and services produced in the country adjusted for inflation, in two quarters, according to the preliminary data released by the Cabinet Office. 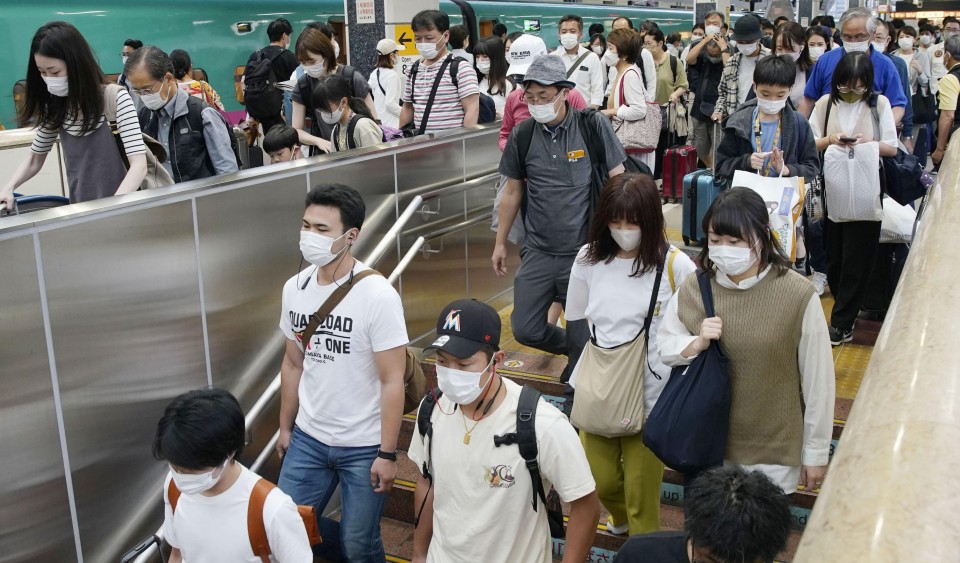 People wearing masks for protection against the coronavirus walk at a shinkansen bullet train platform at Tokyo Station on Aug. 14, 2021. (Kyodo)

Although the growth figure was better than the average projection of 0.7 percent annualized growth by private-sector economists, the GDP rise was too slow to make up for the January-March quarter's 3.7 percent contraction.

With Japan lagging behind other major economies in its vaccine rollout, the latest data highlighted the lack of momentum in the country's economic recovery after its worst slump on record last year caused by the pandemic.

In the same three-month period, the U.S economy grew an annualized 6.5 percent and the euro area logged an 8.3 percent expansion.

"It is vital for us to support businesses and employment while giving the highest priority to curbing the spread of virus infections," economic revitalization minister Yasutoshi Nishimura told a press conference after the GDP data release.

Amid a resurgence of virus infections, the government declared a third virus emergency in late April for Tokyo and three western Japan prefectures, and later expanded it to 10 out of the country's 47 prefectures. It was lifted in late June, except for the southern island prefecture of Okinawa.

Consumer spending rose 0.8 percent from the previous quarter, the first increase in two quarters. In the January-March period, spending fell 1.0 percent as parts of the country were under the second virus emergency.

Exports rose 2.9 percent, up for the fourth consecutive quarter.

The third virus emergency weighed heavily on private consumption, with eateries serving alcohol asked to suspend their operations and dining establishments not serving liquor to close early. People were requested to stay home.

Affected by a global semiconductor shortage, car-related exports were not in full swing, but demand for chip-making equipment and other industrial machinery was solid on the back of strong recovery of the global economy, a government official told reporters.

Meanwhile, imports grew 5.1 percent, partly due to the government's procurement of COVID-19 vaccines.

"Postponed capital expenditure that many firms had initially planned in fiscal 2020 (through March) apparently began emerging this fiscal year," the official said, adding that digitalization and decarbonization-related investments are on the upward trend.

Takayuki Miyajima, a senior economist at Sony Financial Holdings Inc., said consumption was better than analysts' forecast "partly because many people are believed to have gone out more frequently and spent more, especially in June when the emergency was lifted" in most of Japan. But he added that the level of personal consumption is still low.

Since mid-July, Tokyo has been under a fourth state of emergency with recent record-breaking spikes in the number of daily new infections as the highly contagious Delta virus variant takes hold.

In addition to Okinawa and Tokyo, Osaka and three prefectures near the capital have been added to virus emergency, clouding the outlook for the world's third-largest economy achieving high growth in the current July-September quarter.

Miyajima said his firm had expected the economy to grow an annualized 2.8 percent in the July-September period and 5.6 percent in the following quarter, but the projection for the current quarter will be slightly downgraded following the latest GDP data and situation of the virus spread.

"Anyway, there is great uncertainty," he said, indicating that the estimated figures are subject to change depending on infection situations.

In nominal terms, or unadjusted for price changes, the economy grew 0.1 percent, or an annualized 0.2 percent, in the reporting quarter.

Revised GDP data is scheduled to be released on Sept. 8.