Hong Kong police on Wednesday arrested four members of a pro-democracy group known for its yearly vigil commemorating the 1989 Tiananmen Square crackdown after they refused to cooperate in a national security investigation.

The four members of the Hong Kong Alliance in Support of Patriotic Democratic Movements of China, including vice chairwoman Tonyee Chow, were arrested as the group rejected a police demand to provide information on its operations, the group said Wednesday. 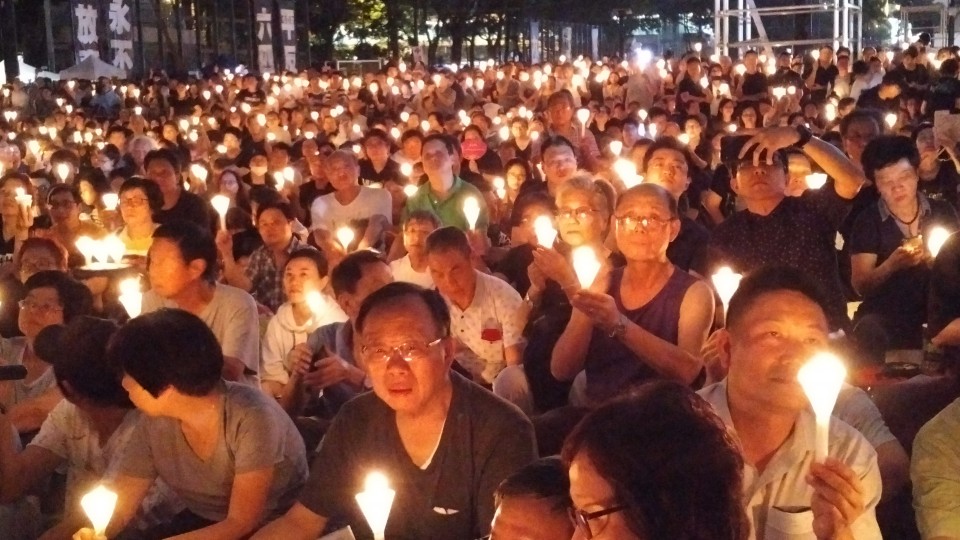 Tens of thousands of people rally in Hong Kong on June 4, 2019 for a candlelight vigil commemorating victims killed in a military crackdown on a student-led pro-democracy protest in Beijing’s Tiananmen Square 30 years ago. (Kyodo)

In a letter sent to the alliance in August, national security authorities referred to the group as a foreign agent and warned it that failure to provide the information could result in a fine of HK$100,000 ($12,860) and six months in jail.

The group told a press conference Saturday that it would not hand over the information, with Chow condemning the authorities' move as "abuse of power."

"They are trying to intimidate the people who participate in the social movement, and we now clearly state that this sort of intimidation will stop with us," Chow said, stressing the group would not follow the request.

Under Beijing's continued efforts to crackdown on dissent in the city, many pro-democracy organizations have folded and the alliance also passed a resolution to disband in August, citing mounting suppression from the authorities.

The vigil on June 4, which had drawn hundreds of thousands of people annually since it was held in 1990, was banned for the second consecutive year by the police, citing public health concerns. Officials have warned that participating in or promoting the rally is illegal.