The outcome of Japan's ruling party leadership race to choose the successor to Prime Minister Yoshihide Suga has become increasingly unclear as four senior lawmakers have joined the race, raising the possibility of a runoff.

But one thing is certain. Liberal Democratic Party lawmakers are under greater pressure to heed public opinion on who should succeed Suga than play by faction rules. 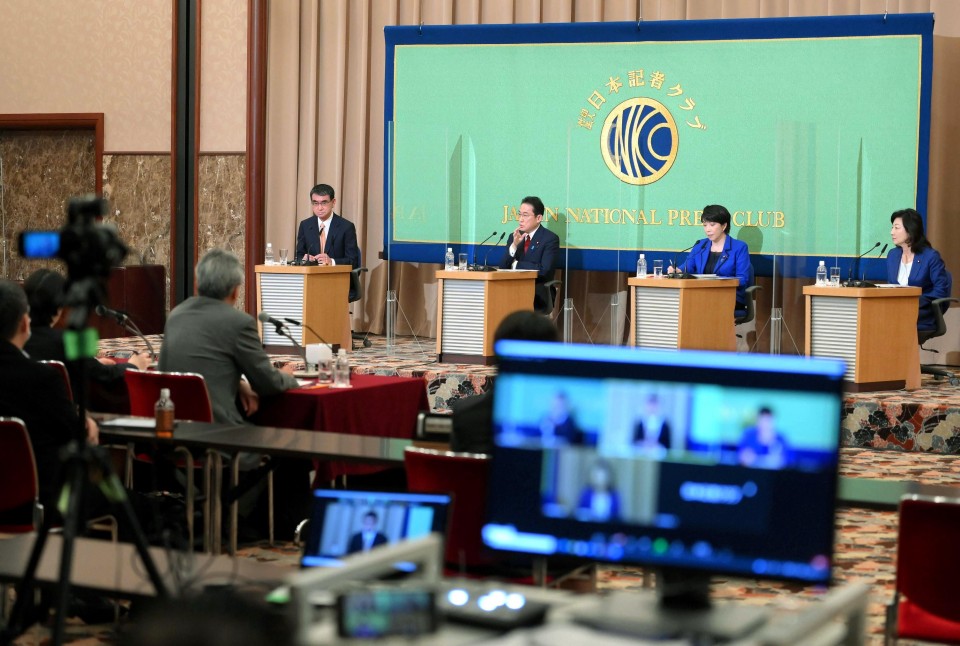 The House of Representatives members' term expires on Oct. 21, meaning whoever among the four contenders wins majority votes will become the new LDP president -- and hence prime minister -- to lead the party and its coalition partner Komeito into a general election in the fall.

That aspect has made many LDP lawmakers -- particularly younger ones who have yet to build strong bases in their constituencies -- seek to install a popular leader especially at a time of the COVID-19 pandemic, and break from control of intraparty factions.

Suga, for example, was elected LDP president last year after major factions, such as the 96-member group led by former Chief Cabinet Secretary Hiroyuki Hosoda, the largest of the seven factions, threw support behind him even though he does not belong to a faction himself.

"The LDP must consider how the public would see the party," said Etsushi Tanifuji, a professor emeritus of political science at Waseda University, alluding to traditional LDP politics in which faction leaders effectively have determined who becomes the party president.

Although there still is a possibility of factions intervening if there is going to be a runoff, where Diet members hold a greater number of votes than rank-and-file members, Tanifuji warned it will be a costly move for the LDP members and the new leader.

"If the LDP puts the logic of the factions at the front and distances itself from the public's opinion in electing its leader, the party will lose support and lose many seats in the general election," he said.

So far, all the factions except the one led by Kishida are set to allow members to cast ballots on an individual basis without endorsing a particular candidate.

All four candidates said if they win the race and form a new Cabinet, they would not accept recommendations from factions regarding who should be given key Cabinet and party posts.

As Suga is stepping down amid mounting criticism over his coronavirus response and failure to communicate with the people, the LDP seemingly needs a new face who is clearly different from the 72-year-old prime minister in order to regain public support.

There is also a move among younger Diet members to seek to install a leader of their generation in place of the older lawmakers who have been key players under the government of former Prime Minister Shinzo Abe that lasted for more than seven years and its extension by Suga, who succeeded Abe's policies and is serving out the remainder of Abe's term.

"During a long rule of one government, people start to grow tired of it toward the end. Once one era comes to an end, there is a move to put behind those who were active in that era and bring new generations forward," said Hitoshi Komiya, a professor of Japanese political history at Aoyama Gakuin University in Tokyo.

The 58-year-old Kono, a reform-minded maverick in the LDP, may fit those inclinations as he has consistently placed top in opinion polls on who is most fit to become Japan's leader and has attracted support of younger LDP Diet members including Environment Minister Shinjiro Koizumi, a future prime ministerial hopeful.

But as Kono ruffled feathers by opposing nuclear energy and abandoning a costly missile defense system in the past, veteran lawmakers, including members of the Aso faction to which he belongs, have been cautious about backing him.

A Kyodo News poll covering the LDP's Diet members shows it is a close race between Kishida, Kono and Takaichi, followed by Noda, although more than 30 percent of the Diet members have yet to decide their pick.

But a separate Kyodo survey targeting rank-and-file members paints a different picture, saying an overwhelming 48.6 percent of the respondents thought Kono was most fit, followed by 18.5 percent for Kishida, 15.7 percent for Takaichi and 3.3 percent for Noda.

The rank-and-file members, who are given an equal number of votes to parliamentarians in the first round, are closer to the general public in thinking as anyone aged 20 or older who has paid membership fees can participate in the leadership vote. The LDP currently has 382 parliamentarians.

Komiya said there is a question as to whether the LDP needs such "drastic medicine" as Kono if the party views that Suga has ultimately succeeded in pushing forward COVID-19 vaccinations to help ease social and economic restrictions in Japan.

Some may turn to Kishida, known for his stability and calm demeanor, as a safer choice, he said.

Kishida, 64, has secured the support of the faction he heads, as well as that of veteran lawmakers in the big factions led by Hosoda, Aso and Takeshita.

Takaichi, 60, a member of the right wing of the LDP who does not belong to a faction, has won support from members of the Hosoda faction, including Abe, and other conservative members.

Noda, 61, entered the race at the last minute after gaining the endorsement of 20 LDP lawmakers, a prerequisite to take part.

But regardless of who becomes the leader, Komiya said the LDP is likely to retain its lead over opposition parties in the Diet.

"Be it Mr. Kono or Mr. Kishida, there won't be a change of government in the general election. So the new leader is only tasked with being better at communicating with the people than Mr. Suga," he said.

The following is a list of the leaders and numbers of members of the seven major LDP factions.

NOTE: Takeshita died on Sept. 17. Only Kishida leads a faction among the four candidates for the party leadership election. Kono belongs to Aso's faction while Takaichi and Noda do not belong to any of the seven.