Campaigning for the Japanese ruling party's leadership election to choose the successor to Prime Minister Yoshihide Suga officially started Friday, with four veteran lawmakers vying over policy steps to better fight the novel coronavirus and deal with an increasingly assertive China and other challenges facing the country.

In a tightly contested race for the Sept. 29 Liberal Democratic Party presidential election, vaccination minister Taro Kono, a reform-minded maverick in the conservative party, who in the past has ruffled feathers by opposing nuclear energy and abandoning a costly missile defense system, is viewed as the early front-runner. However, no candidate has an easy path to victory. 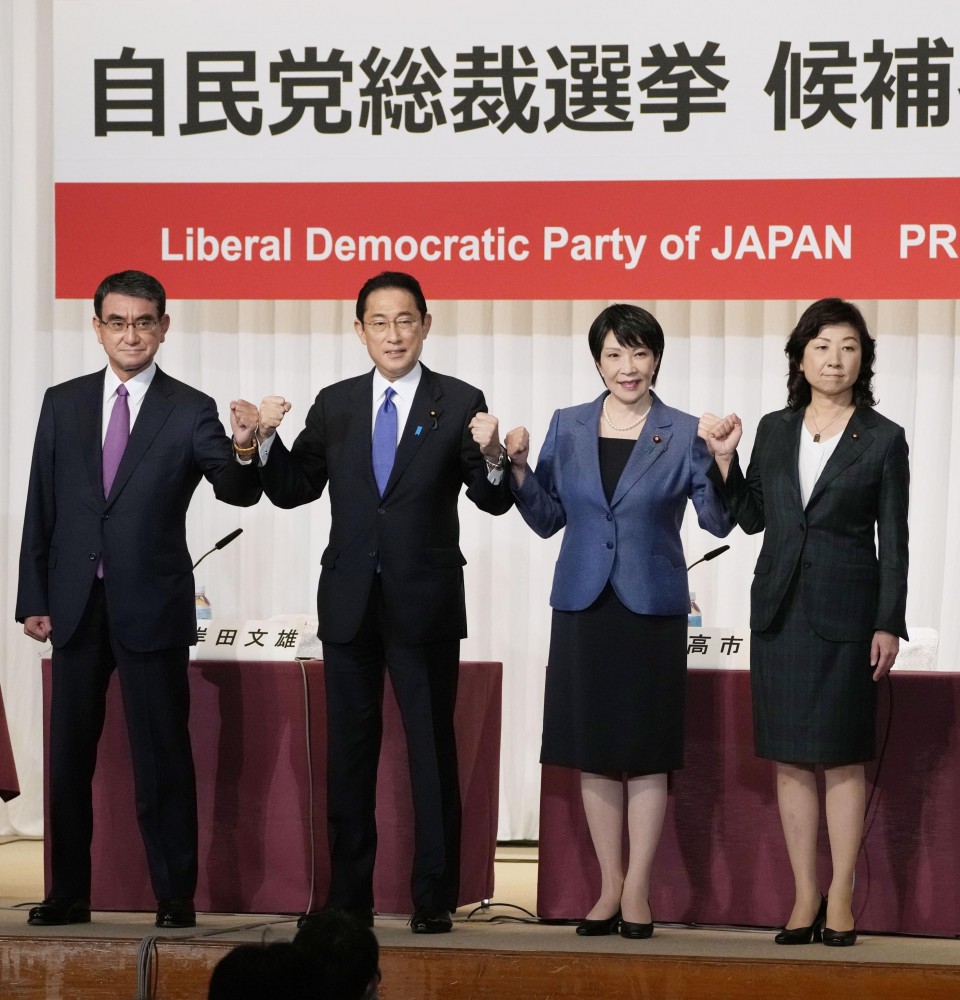 The winner of the race will become prime minister as the LDP-led coalition controls both chambers of parliament. Suga earlier this month announced his resignation as public support for his government hit new lows due to dissatisfaction with his COVID-19 response.

Junior lawmakers with more vulnerable seats are drawn to the 58-year-old Kono, who tops opinion polls on who should become the next prime minister, as they are seeking to install a popular leader ahead of a general election for the House of Representatives this fall, and a House of Councillors vote next summer.

Kono on Friday also got the backing of Suga, who praised him for putting Japan on track to finish vaccinating those eligible and willing to get shots by November at the latest.

Most of the LDP's major factions are allowing members to vote freely, unlike in past presidential elections in which faction bosses, such as Finance Minister Taro Aso and LDP Secretary General Toshihiro Nikai, the party's second-in-command, dictated how votes should be cast.

Each candidate gave a speech at the LDP's headquarters on Friday, with Kono saying he wants to create a Japan where people are encouraged to strive to reach their goals rather than settle for what they have.

"I think a lot of people want to do something but feel like they can't for whatever reason. If I become the leader of this country, I will be proactive in doing what I think should be done," he said, vowing to invest in technology such as 5G networks to enable more people to work remotely and to tackle climate change by promoting renewable energy.

Kishida, another strong contender known for having a steady hand, is expected to gather support from veteran lawmakers who are uncomfortable with Kono's reformist streak.

The 64-year-old also has the advantage of counting on votes from his faction, which has 47 members.

Kishida reiterated his intent to change course from the "neoliberal policies" the government has taken from the early 2000s, pledging to reduce wealth disparity by boosting middle-class incomes.

"There is a division between rich and poor, which has grown only wider due to the coronavirus," he said in his speech. "Now is the time to create a new Japanese model of capitalism and let everyone across the country enjoy the fruits of economic growth."

At a joint press conference later Friday, Kishida said if elected, he would aim to implement the LDP's proposal for amending the Constitution, including a reference to the Self-Defense Forces in the war-renouncing Article 9, while in office.

Both Takaichi and Noda aim to become Japan's first female prime minister, which would be a historic achievement in a country that places lowest among the Group of Seven nations in the World Economic Forum's gender gap rankings.

In the election, each of the LDP's 383 Diet members will cast a vote, and another 383 votes will be determined based on the preferences of rank-and-file members. If no one secures an outright majority, a runoff will be held with the 383 lawmakers and each of the LDP's 47 prefectural chapters casting votes.

The late entry of Noda, who announced her bid Thursday, has raised the chances of an indecisive first round, making it harder to predict who the eventual victor will be.

The Diet is set to hold an extraordinary session from Oct. 4 to choose the new prime minister, who will then deliver a policy speech and take questions from opposition party leaders.

In her speech, Takaichi, part of the LDP's right-leaning cohort and closely allied with former Prime Minister Shinzo Abe, vowed to "defend Japan's sovereignty and honor," in an apparent reference to territorial disputes with neighboring countries and their criticism against the perception of wartime history by some Japanese lawmakers.

The 60-year-old has vowed to continue making regular visits to the Yasukuni shrine, a move sure to strain relations with China and South Korea which both see the site of worship as a symbol of Japan's past militarism.

Noda said women would comprise half of her Cabinet if she is elected prime minister. She underscored the need to create a more inclusive society for sexual minorities, the elderly and people with disabilities, among others, and the importance of tackling Japan's falling birth rate.

The 61-year-old also suggested she would reopen an investigation into document tampering at the Finance Ministry related to a scandal involving Abe and said allowing matrilineal emperors is "an option" amid a shortage of eligible imperials.

Meanwhile, the main opposition Constitutional Democratic Party of Japan criticized the timing of the LDP presidential election, saying it detracts from the government's COVID-19 response.

"A lawmaker's work is in the Diet," CDPJ leader Yukio Edano told reporters. "I think they should do their actual jobs from 9 a.m. to 5 p.m., and after that, they can (campaign)." 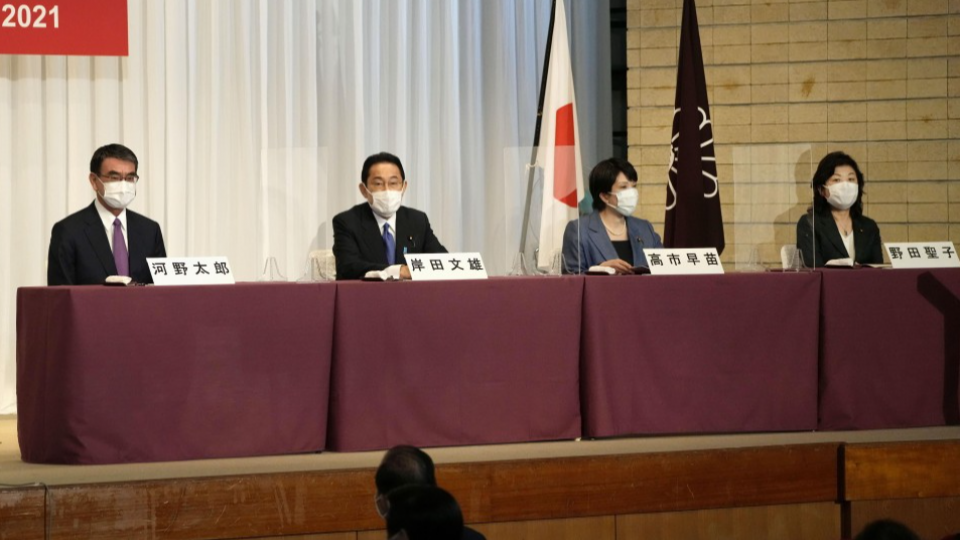 Gist of policy stances of candidates in LDP leadership election

-- will continue to push forward COVID-19 vaccinations and set a road map for bringing social and economic activities to pre-pandemic levels.

-- will conduct a review of Japan's security policy and bolster defense capabilities to deal with new threats.

-- supports same-sex marriage and giving married couples the option to have separate surnames.

-- has walked back his previous opposition to nuclear energy, saying it is "realistic" to restart reactors that have been confirmed safe, while promoting renewable energy in order to achieve carbon neutrality by 2050.

-- has reversed his previous stance of allowing matrilineal emperors amid a dearth in eligible imperials, saying he will respect the conclusions reached by an expert panel advising the government on the issue.

-- will break from the "neoliberal policies" the government has taken since the early 2000s and reduce wealth disparity by boosting middle-class incomes.

-- will put together an economic package worth "tens of trillions of yen" to support businesses and people hit hard by the pandemic.

-- will bolster the coast guard's capabilities and boost cooperation with the Self-Defense Forces to counter intrusions by Chinese ships near the Senkaku Islands.

-- will create a new Cabinet post in charge of economic security including the prevention of a technology drain.

-- aims to implement the LDP's proposal for amending the Constitution including adding a reference to the SDF to the war-renouncing Article 9.

-- will consider legislation enabling citywide lockdowns to curb the spread of COVID-19 and other infectious diseases.

-- will continue to visit the war-linked Yasukuni shrine, seen by China, South Korea and other nations as a symbol of Japan's past militarism.

-- will suspend the government's goal of bringing its primary balance into the black until the Bank of Japan achieves its 2 percent inflation target.

-- seeks to give the SDF the capability to strike enemy bases with electromagnetic pulses.

-- seeks to promote diversity in society welcoming to women, sexual minorities, the elderly and the disabled. She also supports giving married couples the option to have separate surnames.

-- will appoint women to half of Cabinet posts.

-- sees regions as key to dealing with natural disasters and pandemics and will seek to decentralize functions from Tokyo.