Rank-and-file grappler Daieisho sprang an upset against outright leader Terunofuji at the Autumn Grand Sumo Tournament on Monday, handing the Mongolian-born powerhouse his first loss as a yokozuna.

The newly promoted grand champion dropped to 8-1 after failing to establish his favored belt grip and being forced out by No. 4 maegashira Daieisho in the final bout of Day 9 at Ryogoku Kokugikan. 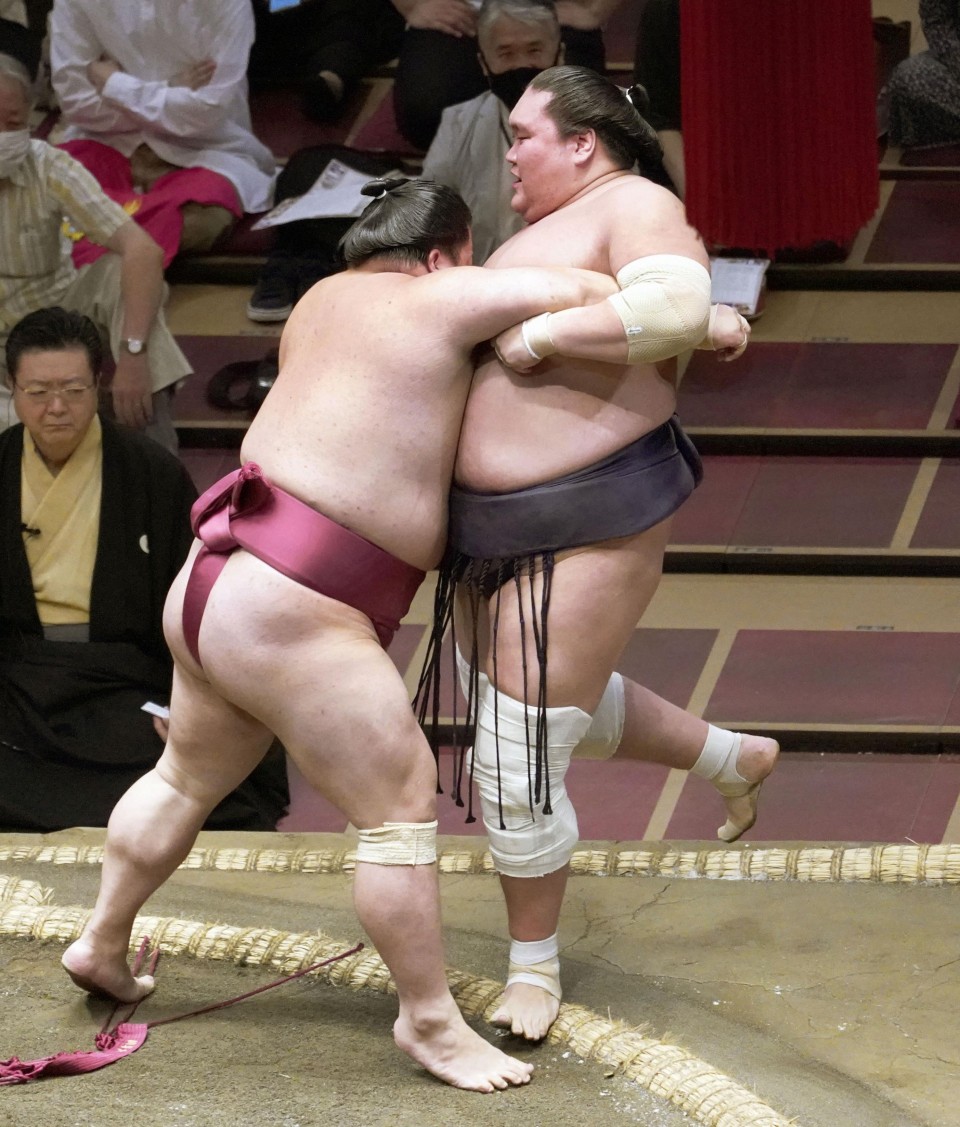 No. 4 maegashira Daieisho (L) upsets yokozuna Terunofuji on the ninth day of the Autumn Grand Sumo Tournament on Sept. 20, 2021, at Ryogoku Kokugikan in Tokyo. (Kyodo)

Former sekiwake Daieisho (6-3) fought desperately to protect his belt at the jump before shoving the stunned title favorite off balance and over the edge.

"I never would have had a chance if I allowed Terunofuji to get a belt grip, so that was the one thing I wanted to prevent," said Daieisho, the surprise winner of this year's January tournament.

"I don't remember that much, but I was able to go forward, fighting and attacking without a break."

Despite the defeat, Terunofuji maintained a one-win buffer after his closest rival on the leaderboard coming into Day 9, No. 10 Myogiryu (7-2), was pushed out by No. 6 Onosho (7-2). The result saw the pair join three other rank-and-filers in a tie for second at 7-2.

The sole grand champion in the absence of Hakuho -- whose entire stable has been kept out of the 15-day tournament under COVID-19 safety rules -- Terunofuji will face No. 6 Ura on Day 10.

His bid for a fifth Emperor's Cup has been aided by subpar performances among the wrestlers ranked directly beneath him in the three "sanyaku" ranks.

The strongest sanyaku performer through Day 8, sekiwake Mitakeumi (6-3), may have fallen out of the title race after taking his third loss against No. 2 Kiribayama (6-3).

Avoiding the brunt of Mitakeumi's charge, the promotion-seeking maegashira spun him around and shoved him out from behind.

The pair exchanged heavy blows in the middle before Takakeisho drove his former ozeki opponent over the edge.

The result continued a turnaround for Takakeisho, who pulled out of the July meet with a neck injury and started the current tournament with three straight losses.

Ozeki Shodai improved to 6-3 after coming perilously close to an upset loss against No. 5 Chiyoshoma (1-8).

The maegashira took Shodai to the edge with a stiff arm, but the ozeki held firm with his feet on top of the straw and rallied back for a victory by pushout.

New sekiwake Meisei improved to 4-5 by beating No. 4 Tamawashi (3-6), absorbing the Mongolian maegashira's opening blast and thrusting him out.

Struggling komusubi Ichinojo (3-6) faces an uphill to secure the winning record needed to keep his rank. The giant Mongolian was forced out by No. 1 Takanosho (5-4), who is bidding for promotion back to sanyaku.