New yokozuna Terunofuji had his biggest scare so far at the Autumn Grand Sumo Tournament but secured his eighth straight win on Sunday, grinding out a force-out victory over No. 4 maegashira Tamawashi.

The undefeated sole leader secured a winning record for the tournament but was more than tested by veteran Tamawashi (3-5), who moved to his left at the initial charge and, with a hand on Terunofuji's throat, had the yokozuna tottering at the straw.

But Terunofuji held on, grabbed underarm belt holds with both hands and swung the Tamawashi around to suddenly gain the advantage before nonchalantly forcing the maegashira out at Ryogoku Kokugikan.

Terunofuji is a firm title favorite in the absence of the other yokozuna, Hakuho, the record 45-time champion missing the meet after two coronavirus cases were reported at his stable.

A fifth career championship and a first as yokozuna would add to an already remarkable career for the Mongolian-born Terunofuji, after knee injuries and other health issues caused him to drop from the second-highest rank of ozeki to the fifth-tier jonidan division before an unprecedented comeback. 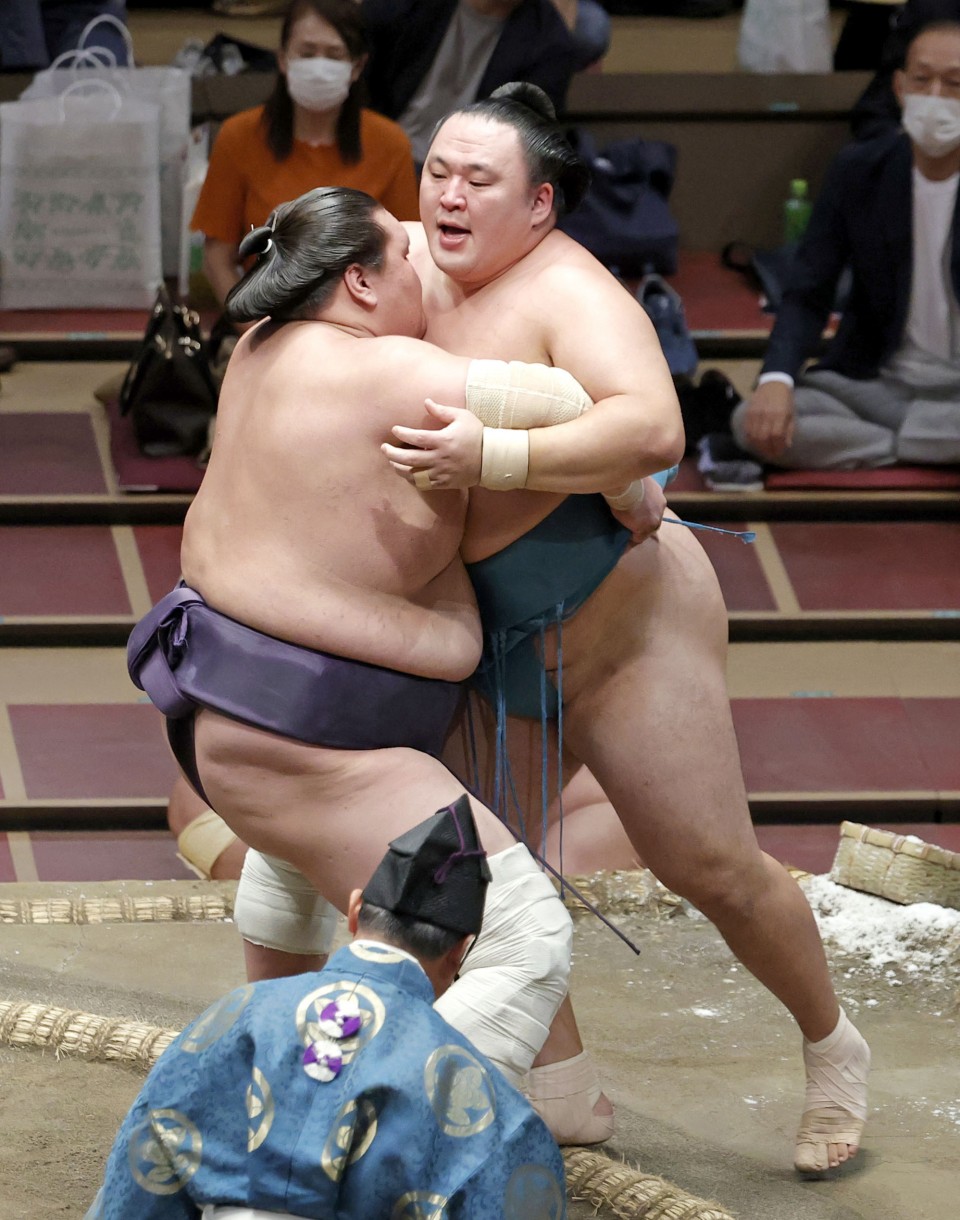 The 34-year-old former sekiwake quickly grappled Chiyonoo to the edge where the lower-ranked wrestler withstood the initial pressure. But Myogiryu maintained his right underarm belt hold and launched a second offense, successfully steering Chiyonoo over the straws.

No. 3 Kotonowaka (3-5) earned an emphatic overarm-throw win over Shodai (5-3), leaving the ozeki all but out of the title race at the tournament's midway point.

Shodai started stronger but the 23-year-old Kotonowaka had plenty of time to snatch a right overarm hold and swiveled the ozeki at the edge to claim a memorable win.

Ozeki Takakeisho (4-4), who started the meet with three straight defeats, evened his mark with his usual bullish charge en route to a slap-down win over No. 4 Daieisho (5-3).

Takakeisho, who pulled out of July's Nagoya due to a neck injury, is not yet back to his best. As a demotion-threatened "kadoban" ozeki he needs eight wins here to retain his rank.

Mitakeumi (6-2) stemmed a strong charge from fellow sekiwake Meisei (3-5), and quickly drove his rival to the edge before securing a pull-down win to maintain his title hopes.

No. 1 Hoshoryu (2-4-2) returned from a spell with tonsil inflammation. The nephew of former Mongolian yokozuna Asashoryu grabbed a well-deserved win over giant komusubi Ichinojo (3-5), although it took two tries.

Their lengthy initial bout had to be refought after both wrestlers hit down at the same time. Hoshoryu used his physical disadvantage well in the second bout, getting under Ichinojo's long reach and forcing him out.

Komusubi Takayasu (3-5) succumbed to a surprise jump to the side and subsequent overarm throw by No. 5 Chiyoshoma, who claimed his first win of the meet.