As of Sept. 1, Umeno Sumiyama and Koume Kodama had their record recognized, surpassing Japanese centenarian celebrity twin sisters Kin Narita and Gin Kanie who held the previous record of 107 years and 175 days. Narita died in 2000 and Kanie in 2001. 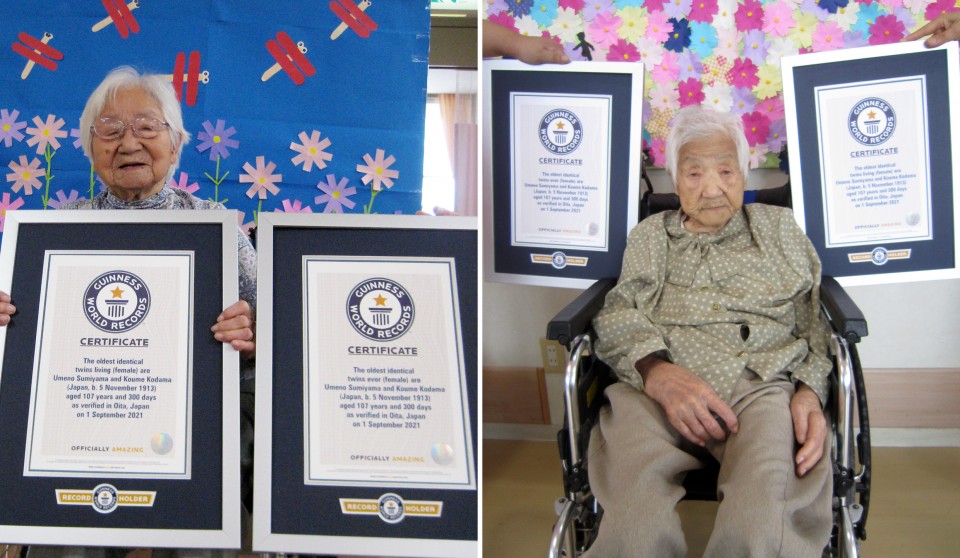 Fondly known to the public as Kin-san and Gin-san, the sisters were household names in Japan, having appeared on numerous television shows and in commercials.

Sumiyama and Kodama were born on Nov. 5, 1913, on Shodo Island, Kagawa Prefecture, the third and fourth of a total of 11 siblings. They lived separately after graduating from elementary school, but in their 70s began a pilgrimage to the 88 temples on Shikoku Island, according to the certification.

They have in the past joked about aiming for the record set by Narita and Kanie, according to Guinness World Records.

The sisters reside in separate elderly care homes. Sumiyama teared up upon receiving a certificate from staff at the facility, though Kodama, who suffers from memory loss, had difficulty comprehending the award, a Guinness World Records press release said.

The number of people aged 100 or above in Japan, which has one of the most rapidly aging populations in the world, hit an estimated 86,510, the Health, Labor and Welfare Ministry said last week, setting a new record for the country.