One week after a civilian government collapsed and the Taliban retook control of Afghanistan last Sunday amid a rapid troop drawdown by U.S. forces, no large chaos is seen in the capital Kabul or an overt show of oppression against women by Taliban soldiers.

But even though the Taliban say they will respect women's rights within the framework of Islamic law, female presenters have vanished from the screens of state-run TV. Afghans remain concerned that terror-driven rule could return with the Taliban back in power. 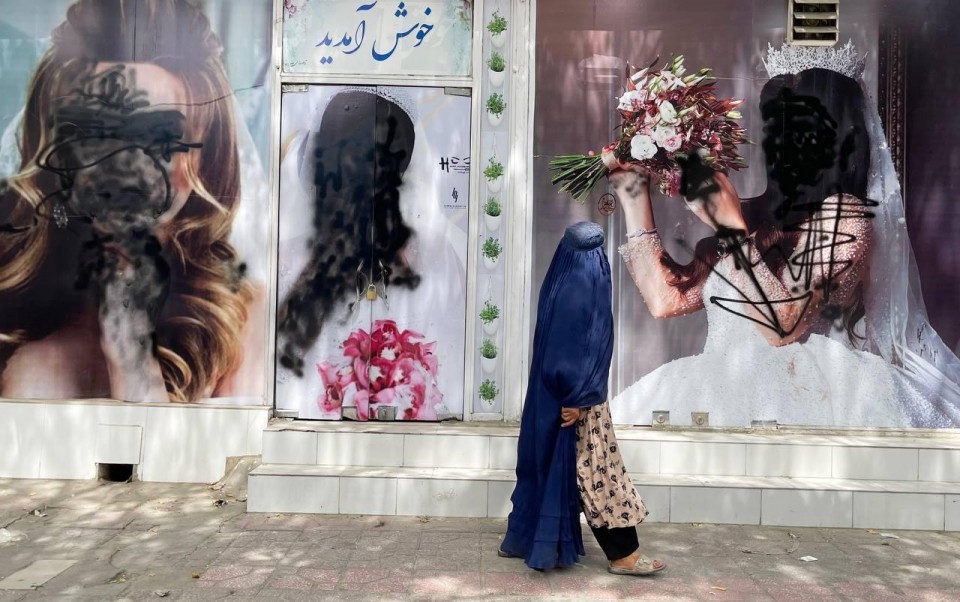 The Taliban previously ruled Afghanistan between 1996 and 2001. Back then, as now, soldiers on pickup trucks patrolled around with rifles slung on their shoulders. They raised the white Taliban flag, which bears an Islamic oath in Arabic.

The Taliban forced people to go to mosques for prayers, through violence or threats of violence. They refused to allow women to work or be educated, and required that women cover their face and body with the burka.

So far, no such moves are visible. A senior Taliban official who showed up at the Agriculture, Irrigation and Livestock Ministry said female workers have been told that they can continue to work, and have been urged to return.

Thursday fell on the last day of Ashura, a particularly important religious commemoration for Shia Muslims. In Afghanistan, militants have long targeted Shia places of worship with terror attacks on Ashura.

A 41-year-old Shia woman who was at a place of worship on Thursday had recently fled Mazar-i-Sharif, a key strategic point in the country's north. Harsh Taliban rule still fresh in her memories, she said she hopes to leave the country if possible.

A 52-year-old man who is in charge of the place of worship credited the return of the Taliban with the relative peace during the commemoration this year. He said that while the previous government failed to stop terror attacks on Ashura, he had no worries this year.

Some people take the view that it may actually be safer now with Taliban soldiers patrolling the streets.

The Taliban on Tuesday pledged not to retaliate against anyone and said women's rights will be respected. But it remains to be seen whether the Taliban have refashioned themselves.

People trying to reach Kabul airport are facing restrictions on access amid rumors an order has been issued to stop young people from leaving the country.

Portraits of ousted President Ashraf Ghani hung on the walls of the municipal government offices have been ripped off.

Sporadic demonstrations marked Thursday, the anniversary of Afghanistan's independence from British rule in 1919, with participants raising the country's national flag.

The black-red-green flag that used to fly on a hill in central Kabul is no longer there. The green was supposed to mean hope for the future.