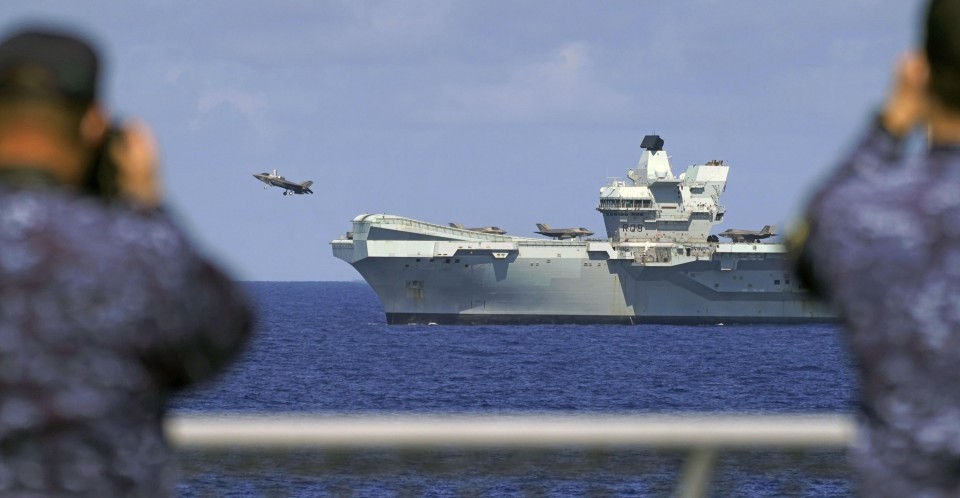 An F-35B fighter jet takes off from British aircraft carrier Queen Elizabeth during Japan and Britain's joint naval drill in the Pacific Ocean south of Okinawa Island on Aug. 24, 2021. (Kyodo)

U.S. and Dutch naval vessels accompanying the British strike group also participated in the drill, according to the ministry.

In the exercise, which was open to the media, the F-35B advanced stealth fighter jets belonging to the U.S. Marine Corps and the Royal Navy took off from the Queen Elizabeth's ski ramp-like deck as part of the training.

Japan is considering deploying a total of 42 F-35B fighter jets in the future to an ASDF base in Miyazaki Prefecture in the country's southwest, according to the Defense Ministry.

"It is essential to strengthen cooperation with countries that share universal values, regardless of geographical distance," Rear Adm. Yasushige Konno of the MSDF told a press conference Tuesday.

When asked about the stealth fighter jets, Konno said, "At present, only the United States and Britain are deploying (the F-35B jets). It is very meaningful for us to be able to participate in a joint exercise and gather information."

The Queen Elizabeth and its strike group left Britain in May to showcase London's increased engagement in the Indo-Pacific in the face of Beijing's active presence in the East and South China seas.

The strike group is expected to make a port call at the U.S. Navy base in Yokosuka, southwest of Tokyo, in September.