Japan cemented its place atop the skateboarding world Wednesday when Sakura Yosozumi won the women's park Olympic title to claim the nation's third gold in three events at the Tokyo Games. 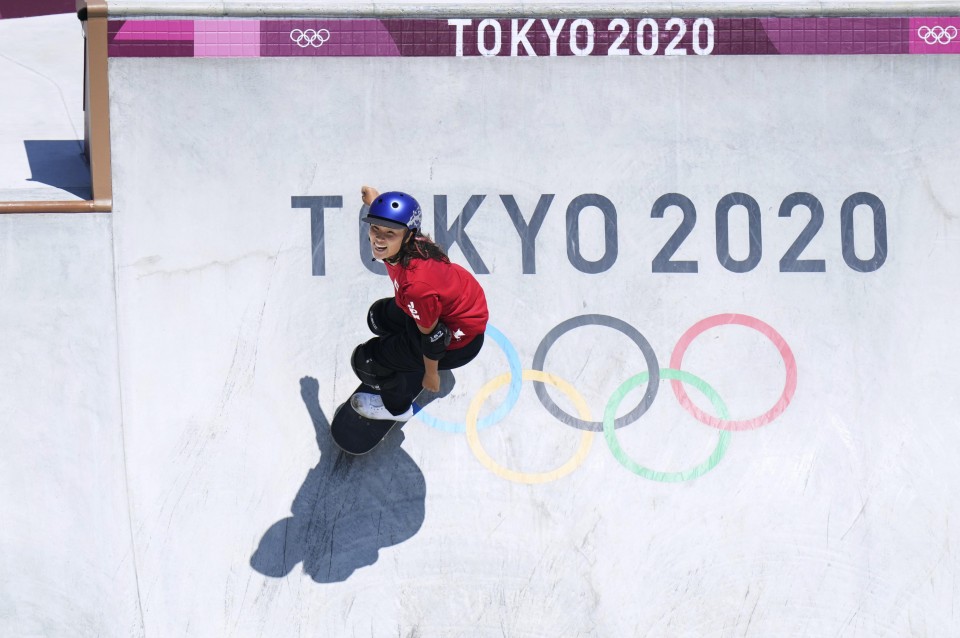 Sakura Yosozumi of Japan competes in the women's park skateboarding finals of the Tokyo Olympics at Ariake Urban Sports Park on Aug. 4, 2021. (Kyodo)

It is the first time that all three Olympic medalists in a single women's event were born in Japan.

Yosozumi hit two 540s to close her first run, setting a standard no other skater could meet. She mixed in a variety of grinds and slides in a controlled run that ultimately won her the title.

"I'm really, really happy," Yosozumi said with tears in her eyes, adding, "I had trained so hard that I had no regrets, and I think that led to the result."

Had Hiraki or Brown won gold, they would have been the youngest-ever Olympic champions, but both were clearly ecstatic with their achievement as they beamed through tears on the podium's bottom two steps. 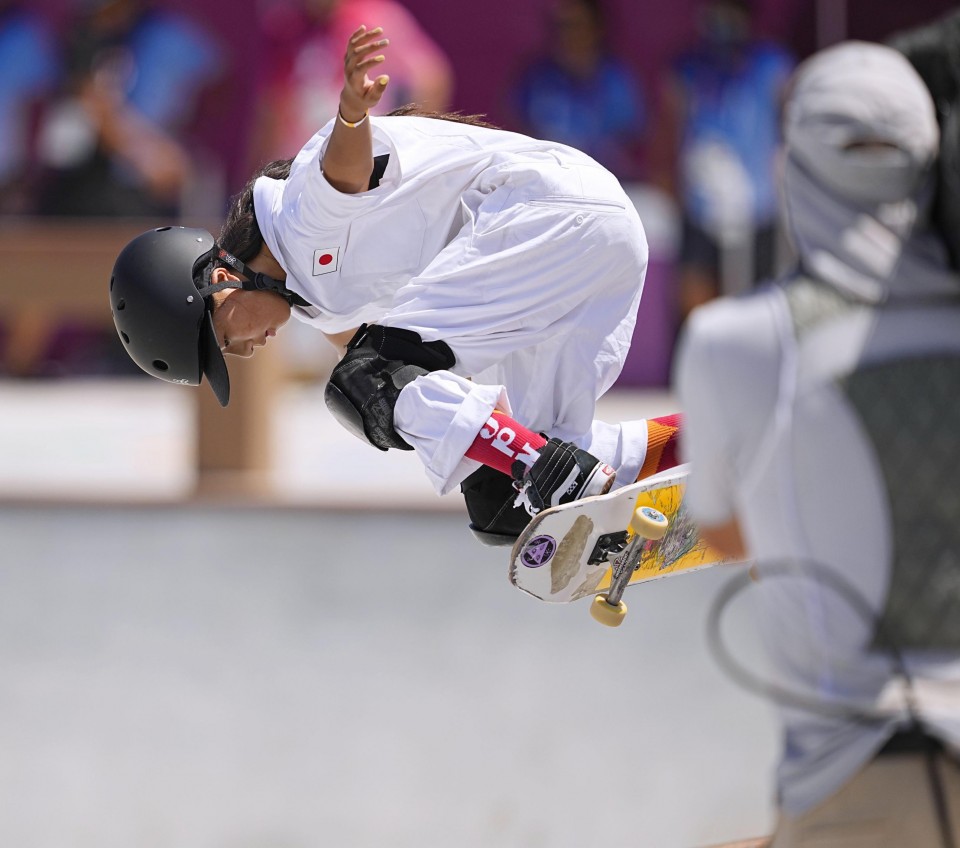 Kokona Hiraki of Japan competes in the women's park skateboarding finals of the Tokyo Olympics at Ariake Urban Sports Park on Aug. 4, 2021. (Kyodo)

Hiraki set her silver-winning score on her second run, mixing a clean kickflip with a creative stall on the rail element and throwing in a 360 for good measure.

Brown went big in her first two runs, taking lots of speed into her vertical tricks with an all-out attitude. She bailed on a kickflip in the first and still scored 47.53, showing her promise for so much more.

"I'm so happy. I fell twice (trying the kickflip) and I was like, 'That's kinda sketchy,' so I was like, 'I gotta make it.' And I didn't really think I was going to make it but I did it, and I'm so happy," she said.

In her third run, the blonde-haired Brown put it all together, a handplant, 540, alley-oop and a variety of slides getting her the bronze.

She said some words of encouragement from Yosozumi made a big difference. 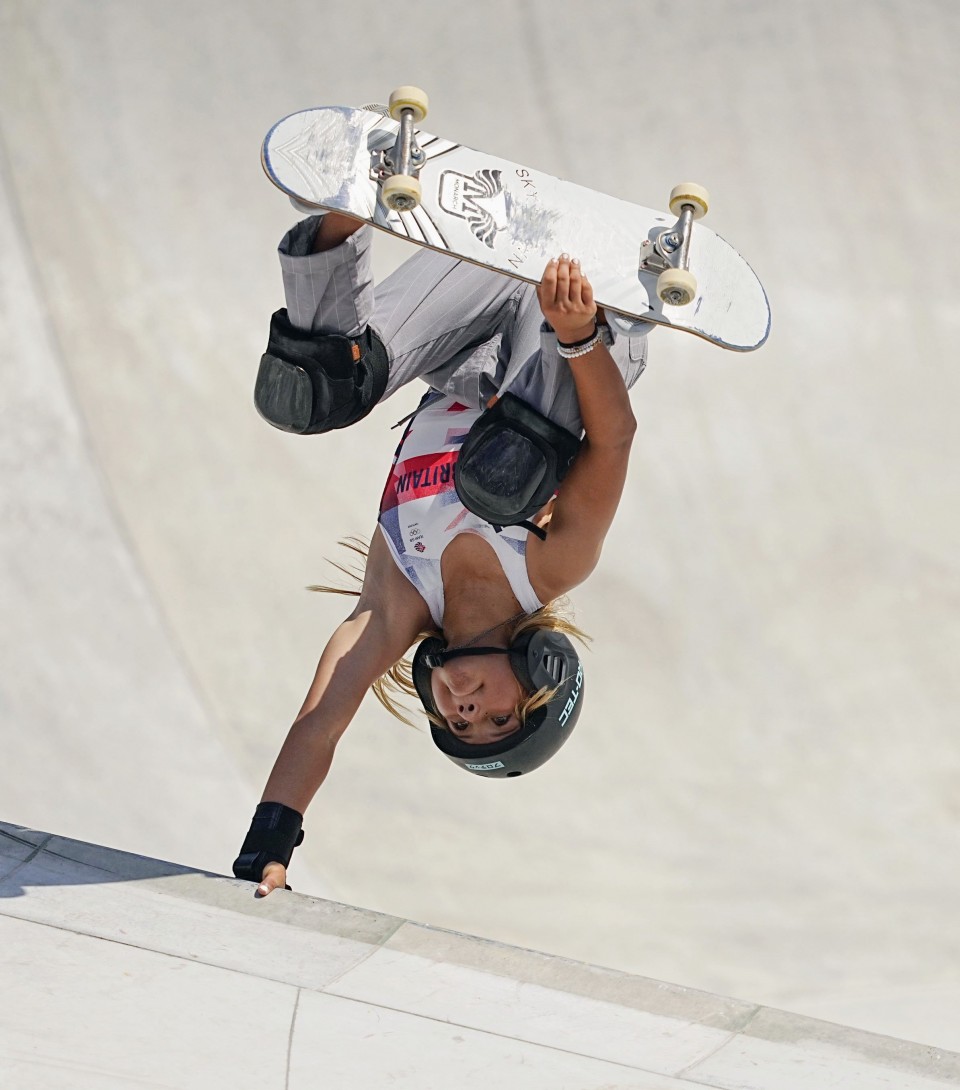 Sky Brown of Britain competes in the preliminary round of the women's park skateboarding at the Tokyo Olympics on Aug. 4, 2021, at Ariake Urban Sports Park in Tokyo. (Kyodo) ==Kyodo

"Sakura told me, 'You got it, Sky. We know you're gonna make it.' That really made me feel better."

"It was unbelievable. Even right now it feels like a dream. It's insane. I'm so happy and so thankful and so proud of every one of the other girls, too."

Japan's other finalist, Misugu Okamoto, let a medal slip through her fingers.

The 15-year-old was the most daring of all the skaters, throwing 540s with abandon and attempting the highest difficulty tricks.

Okamoto sat in third before Brown's final run and would have almost certainly won a medal on her final attempt but fell when trying a kickflip with just seconds remaining, costing herself dearly. She fell on all three runs but still finished with a best score of 53.58.

Japanese two-time snowboard Olympic silver medalist Ayumu Hirano takes on the men's skateboarding park event on Thursday, but it is considered unlikely he will challenge for a medal. 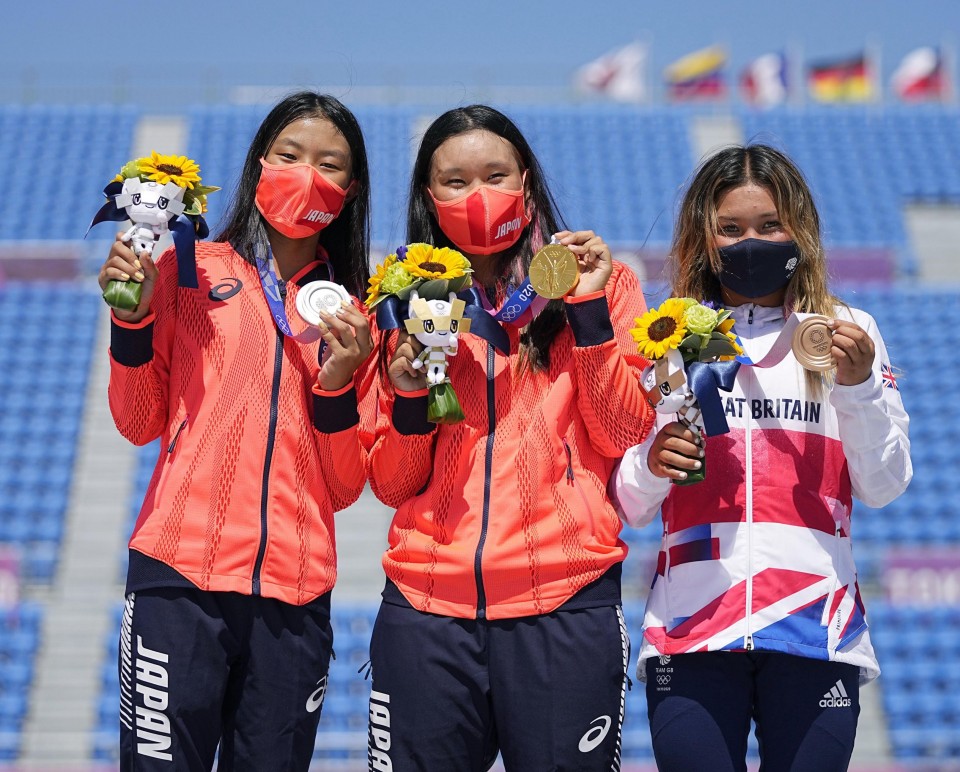 Sakura Yosozumi (C) of Japan poses for a photo after winning the women's park skateboarding at the Tokyo Olympics at Ariake Urban Sports Park in Tokyo on Aug. 4, 2021, alongside compatriot Kokona Hiraki (L) and Sky Brown of Britain, who took silver and bronze, respectively. (Kyodo) ==Kyodo