A Japanese court on Tuesday ruled as unconstitutional the now-defunct eugenics protection law that authorized the government to stop people with disabilities from having children, but rejected a claim for damages sought by five people.

It was the sixth ruling in a series of similar lawsuits and the fourth declaring the obsolete law to be unconstitutional. Demands for compensation have been rejected in all the rulings on the grounds that the statute of limitations had expired 20 years after the forced surgeries.

The plaintiffs are planning to appeal the ruling, according to their lawyers. 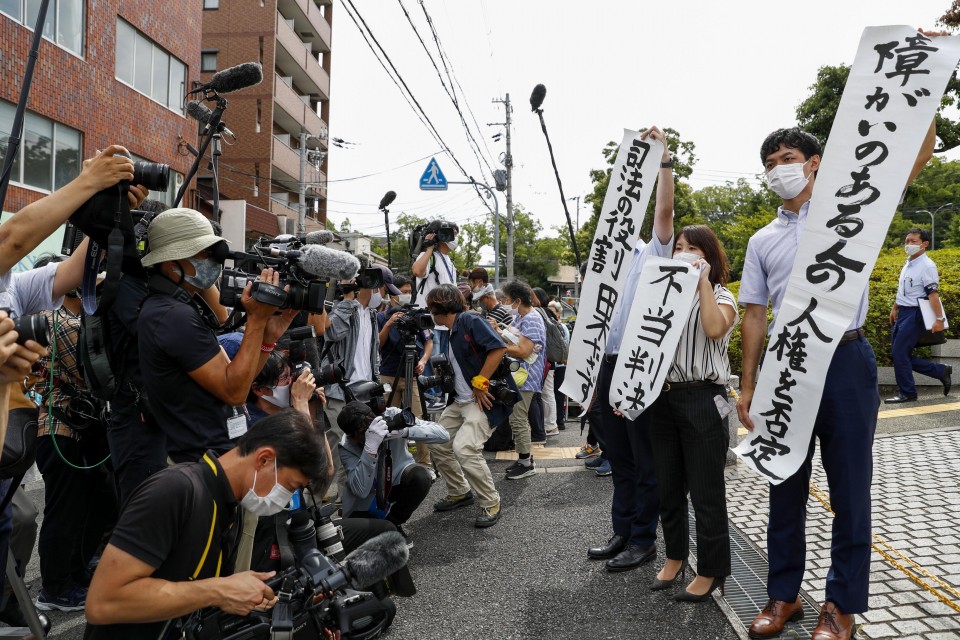 Lawyers hold up banners outside the Kobe District Court on Aug. 3, 2021, against the court's ruling that rejected a claim for damages over the now-defunct eugenics protection law. (Kyodo)

On Tuesday, the Kobe District Court concluded that the law had deprived the plaintiffs of the opportunity to decide whether to give birth and raise a child.

"The purpose (of the law) was extremely inhumane and violated the Constitution, which holds the basic idea of respecting individuals," Presiding Judge Akiyoshi Koike said in handing down the ruling.

The five plaintiffs from Hyogo Prefecture -- two couples with hearing impairment and one woman with cerebral palsy -- had sought a total of 55 million yen ($504,000) in compensation from the government.

Of them, Kimiko Kobayashi, 88, was forced to abort her child and sterilized around 1960, according to the ruling. Yumi Suzuki, 65, underwent forced sterilization in 1968 at the age of 12 without any explanation.

About 25,000 people with disabilities were sterilized under the law, including around 16,500 who were operated on without their consent, according to government data.

After neglecting the issue for years, Japan's parliament enacted legislation in April 2019 to pay 3.2 million yen in state compensation to each person who underwent forced sterilization, but there was a backlash over the uniform amount, among other reasons.

The latest ruling comes amid expectations among those affected by the 1948 law and their supporters that the ongoing Tokyo Olympics would provide the impetus necessary to resolve the issue if it captures the attention of foreign media.

In 1994, a disabled Japanese woman called for abolishing the law at the U.N.-coordinated International Conference on Population and Development held in Egypt, which became a catalyst for its abolition two years later.