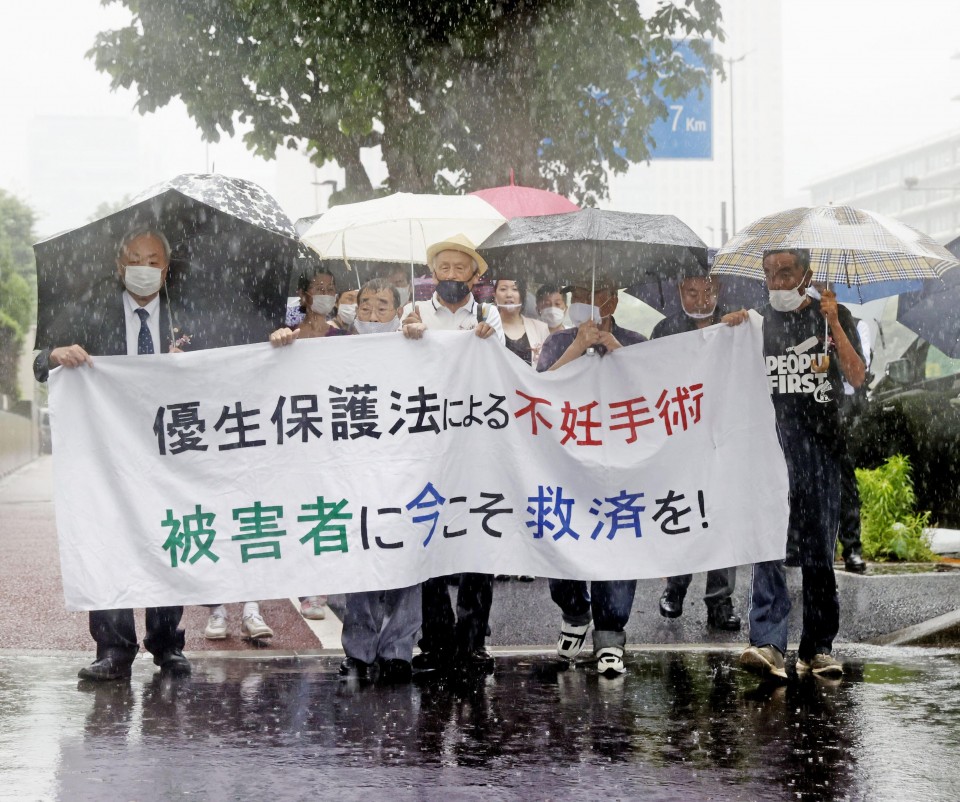 A man (2nd from L, front) who was sterilized against hist will in 1957 under the now-defunct eugenics protection law head to the Tokyo District Court with his lawyers and supporters for the ruling on his damages suit against the government on June 30, 2020. (Kyodo)

TOKYO - A Japanese court on Tuesday rejected a 30 million yen ($280,000) damages suit filed by a 77-year-old man who was sterilized against his will in 1957 under the now-defunct eugenics protection law.

The Tokyo District Court did not rule on whether the obsolete law that mandated the government to stop people with intellectual disabilities from reproducing was unconstitutional, a focal point in this case.

But Presiding Judge Masaharu Ito said in the ruling that the sterilization surgery "infringed upon freedom ensured by the Constitution."

The plaintiff underwent surgery aged around 14 when he was at a children's home in Miyagi Prefecture, northeastern Japan, without being informed in advance.

He filed the lawsuit in May 2018, claiming the government had violated the Constitution, which guarantees the pursuit of happiness and equality under the law.

In the trial, the man had argued that the statute of limitations has not expired as "he did not have the luxury of knowing about the details of the operation or level of damage until recently." He added that if it has expired, the responsibility lies with Japan's parliament, which delayed enacting legislation to compensate victims.

The state did not respond to claims about whether the eugenics law violated the Constitution, and said it was not obliged to pay compensation due to the 20-year statute of limitations on demands for damages under the Civil Code.

It also denied that parliament was responsible, saying "enacting legislation to provide additional relief other than state compensation was not considered essential."

The ruling was the second in 24 similar suits filed with eight district courts in Japan.

In the first ruling in May 2019, the Sendai District Court also rejected a 71.5 million yen damages suit filed by women in their 60s and 70s in Miyagi, saying the statute of limitations had expired.

Between 1948 and 1996, the eugenics law authorized the sterilization of people with intellectual disabilities, mental illnesses or hereditary disorders to prevent births of "inferior" offspring.

About 25,000 people with disabilities were sterilized under the eugenics protection law, including around 16,500 who were operated on without their consent, according to the health ministry and the Japan Federation of Bar Associations.

After neglecting the issue for many years, Japan's parliament finally enacted legislation in April last year to pay 3.2 million yen in state compensation to each person who underwent forced sterilization, irrespective of whether they were believed to have agreed to undergo surgery or not.

Prime Minister Shinzo Abe issued an apology in a statement expressing regret, but did not mention the legal liability of the state.

In June this year, both houses of parliament launched an investigation into the legislative history and the scope of damage.

A panel of the Japanese Medical Science Federation also released a report last Thursday saying that medical personnel, who had been involved with enacting and enforcing the now-defunct law, had neglected to address the issue even after the concept of human rights had become widespread in Japan.