The finance chiefs of the Group of 20 major economies on Saturday backed a global minimum corporate tax rate of at least 15 percent and other new rules to prevent multinational firms from avoiding duties, hoping to finalize in October plans that would bring what they call "historic" changes to the international tax system.

The momentum toward concluding years of negotiations reflects a growing desire among many governments to raise revenues to invest in their recovery from the coronavirus pandemic as well as frustration over the way U.S. tech giants in particular are thought to have avoided paying their fair share of taxation by taking advantage of low-rate jurisdictions.

"We endorse the key components" of a broad agreement recently reached by around 130 countries and regions on the tax issue, the G-20 members said in a communique released after their two-day talks in Venice, Italy. 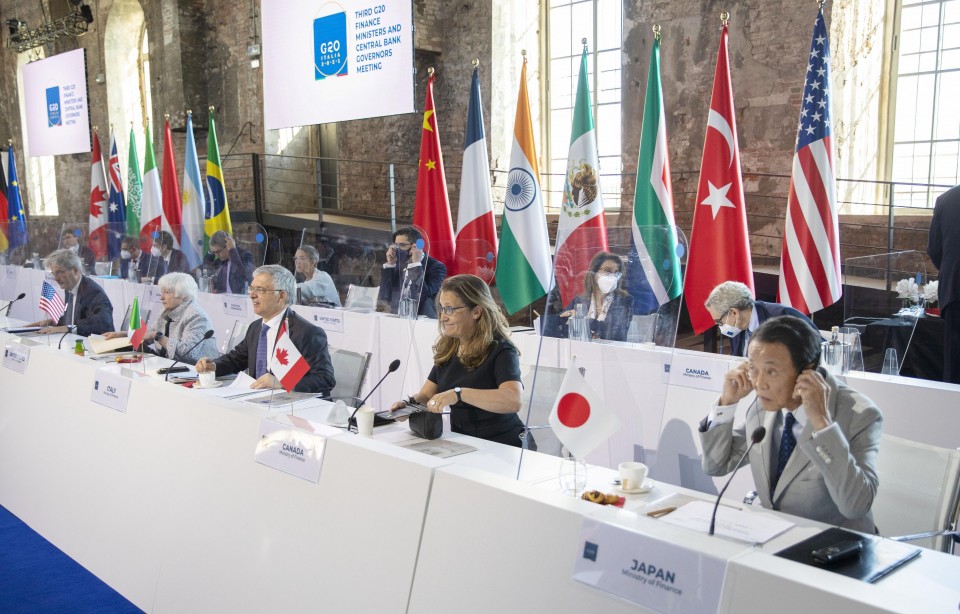 While details of the agreement still need to be worked out, such as the specific level of the minimum tax rate, participants in the negotiations are aiming to implement the new rules in 2023.

"It is going to be the first historic change (in the international tax system) in a century," Japanese Finance Minister Taro Aso told a press conference.

In their first in-person meeting since the start of the pandemic, the G-20 finance ministers and central bank governors acknowledged that the outlook for the global economy has brightened amid vaccine rollouts and continued policy support, but warned that the spread of new variants of the virus and uneven access to vaccinations are "downside risks."

Concerns have been growing that allowing developing countries to lag behind in terms of availability of vaccines leaves their populations vulnerable to outbreaks and could allow contagious variants to emerge and ricochet around the world, possibly stifling the global economic recovery. 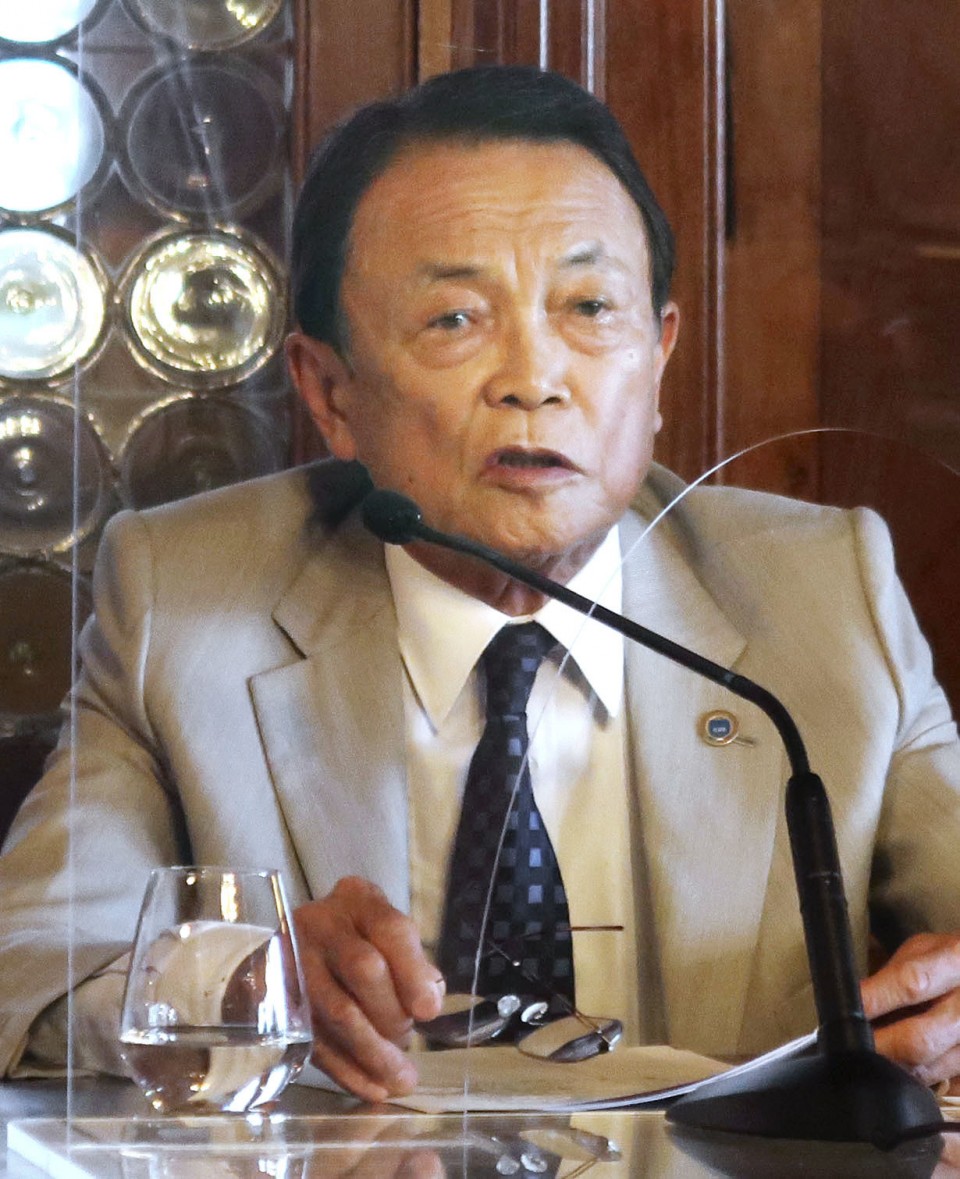 The G-20, which brings together key industrialized and developing economies, vowed to "prioritize acceleration of the delivery of vaccines" in its communique, but did not come up with new numerical commitments.

The participants also reaffirmed their resolve to use "all available policy tools" to address the adverse consequences of the pandemic, and decided to take heed of "price stability" amid a recent pickup in inflation in the United States, which is serving as a key driver in the global economic recovery.

The progress on international taxation issues came after the Organization for Economic Cooperation and Development announced on July 1 an agreement on a two-pillar reform package -- introducing a new levy on the world's largest and profitable companies, including IT giants, and the 15 percent common minimum tax rate.

The Pillar One intends to change existing taxation rules that have been heavily tied to a company's physical presence. It seeks to "re-allocate" taxing rights over multinationals from their home countries to the markets where they have actual business activities and are earning profits, regardless of their physical presence there.

About 100 multinational companies, and possibly several Japanese firms, may become subject to the new tax.

Pillar Two will seek to put a floor on the competition among countries to offer the lowest corporate tax rate to lure companies.

In the communique, the participants sought to add further impetus to the process by urging more countries to sign on the deal.

"We invite all members...that have not yet joined the international agreement to do so," the G-20 said, apparently referring to seven of the 139 countries and regions that have been involved in the OECD-led negotiations, such as Hungary and Ireland, which are known for their low corporate tax rates.

French Finance Minister Bruno Le Maire, who hailed the new taxation architecture as a "revolution" to ensure fairness, told reporters that three European countries, including Estonia, that are yet to come on board have "some doubts," but that they are not opposed.

He said he believes that some difficulties can be "alleviated" and that the impetus given by the G-20 economies on the issue should bring together "all nations" involved.

The next step will be in October when G-20 finance chiefs are scheduled to meet in Washington to "define the very last parameters" of the rules, Le Maire said.

The G-20 will then likely seek to secure final approval on the issue at their leaders' meeting scheduled later in the month in Rome.

Moves toward reaching an agreement have gained steam in recent months after the U.S. administration of President Joe Biden, which is seeking to revive multilateralism, proposed that the minimum corporate tax rate be at least 15 percent globally and that there is a need to end "a race to the bottom on corporate taxes."

The U.S. idea has resonated well among the Group of Seven industrialized countries, including Japan, and others that have seen their fiscal health deteriorate due to increased spending to support their pandemic-hit economies.

The OECD has estimated that under Pillar One, taxing rights on more than $100 billion of profits will be re-allocated to countries each year, while Pillar Two will generate around $150 billion in additional global tax revenues annually.

In the communique, the G-20 also vowed to fight trade protectionism and highlighted the need of "concerted efforts" to reform the World Trade Organization.

-- endorse plans to set a global minimum corporate tax rate of at least 15 percent and other rules to address tax avoidance by multinational firms.

-- call for the taxation reform plans to be finalized by their next meeting in October.

-- invite all countries and regions that have yet to join the international tax agreement to do so.

-- warn that the spread of new coronavirus variants and different paces of vaccination are downside risks to the global economy.

-- reaffirm their resolve to use all available policy tools to address the adverse consequences of the coronavirus pandemic.