Foreign and development ministers from the Group of 20 major economies on Tuesday pledged to strengthen coordination in fighting the COVID-19 pandemic and to boost investment toward ensuring food security.

In a declaration issued after a meeting in Matera, southern Italy, the G-20 ministers vowed to maintain transparent and nondiscriminatory food trade in line with World Trade Organization rules. 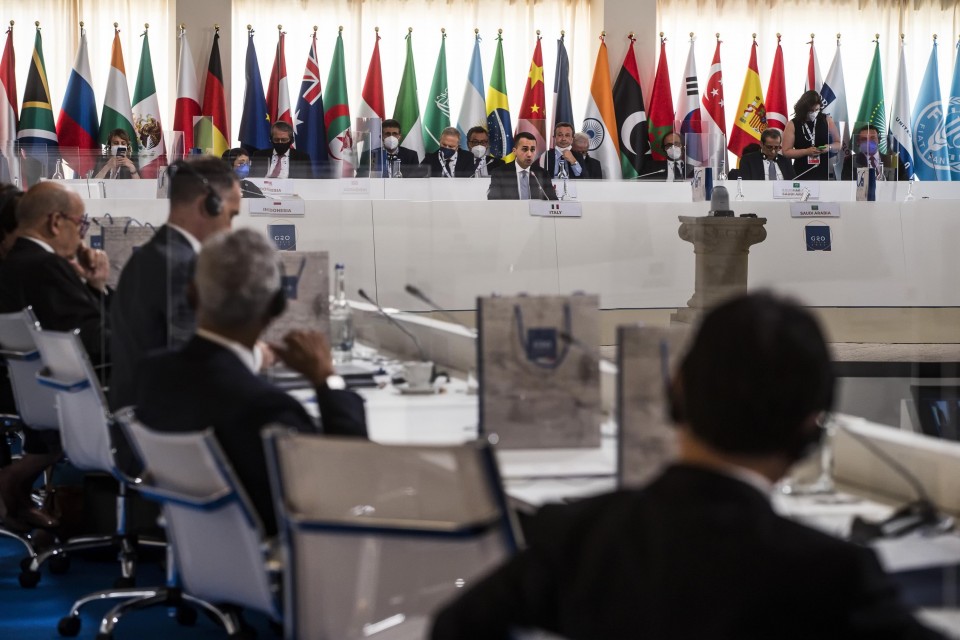 "We...convened here in Matera to contribute to strengthening international efforts to contain the effects of the pandemic on lives and livelihoods and to build forward better," they said in the document, while expressing their "deep concern" over food shortage situations thought to have been exacerbated by the spread of the novel coronavirus around the world.

It was the first in-person meeting of the foreign ministers from the G-20, which represents more than 80 percent of the world economy and three-quarters of global trade, since 2019.

A joint meeting involving development ministers was also held to discuss providing assistance to Africa, leading to the release of the "Matera Declaration" with an emphasis on food security issues.

Japanese Foreign Minister Toshimitsu Motegi said during the foreign ministerial meeting that in addition to providing coronavirus vaccines, Tokyo will assist African countries, which have been hard-hit by the pandemic, in building their health and medical systems.

U.S. Secretary of State Antony Blinken and British Foreign Secretary Dominic Raab were also among those who attended the meeting in person, while Chinese Foreign Minister Wang Yi joined online.

The event laid the groundwork for a G-20 summit slated for October in Rome.

According to the declaration, the foreign and development ministers underscored the importance of accelerating digital transformation and innovation to ensure sustainability in agriculture while appropriately protecting intellectual property rights and data privacy.

They vowed to speed up the adapting of agriculture and the food system to conditions brought about by climate change, recognizing that the Earth's warming represents one of the factors driving the rise in global hunger.

The ministers also called for actions for the empowerment of women and youth through education and creating opportunities for entrepreneurship, noting the struggles caused by a loss of work opportunities especially in rural areas amid the pandemic.

The world is "not on track" to achieve zero hunger by 2030 as aimed for in the U.N. Sustainable Development Goals, the declaration warned.

"With current trends, the number of people affected by hunger would exceed 840 million by 2030. These figures do not take into account the toll of the COVID-19 pandemic that is likely to add more than 100 million people to the total number of undernourished in the world, as people lost their jobs and income, with consequences on their food security," it said.

The topics of discussions also included the compilation of international rules on development finance and ways to reform the Geneva-based WTO, comprising more than 160 members.

Before the foreign ministers' meeting, some 80 countries joined a meeting on Monday in Rome of an anti-Islamic State coalition hosted by Italian Foreign Minister Luigi Di Maio and Blinken.