The finance chiefs of the Group of 20 major economies gathered Friday in Italy for two-day talks to address an increasingly uneven economic recovery from the coronavirus pandemic and to push for plans that would keep multinational companies from evading taxes by shifting their profits overseas.

It is the first such in-person meeting since the pandemic accelerated early last year, and is taking place at a time when concern is growing over unequal access to coronavirus vaccines, a situation leading to diverging recoveries between countries. 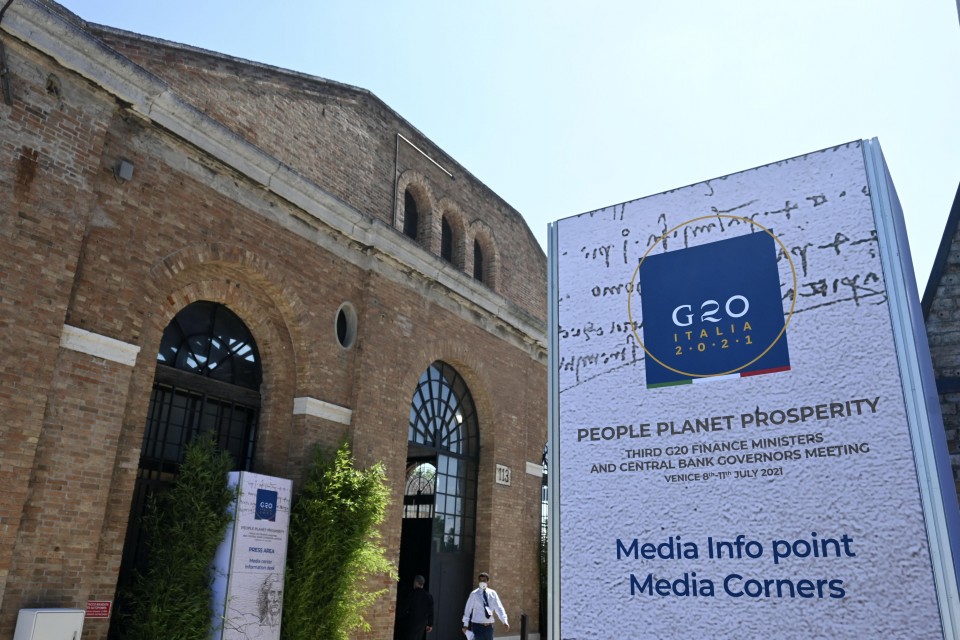 Photo taken in Venice, Italy, on July 9, 2021, shows the venue of a two-day meeting from the same day of the finance chiefs of the Group of 20 major economies. (Kyodo) ==Kyodo

During the talks in the canal city of Venice, the G-20 finance ministers and central bank governors will "progress their discussions on issues related to international economy and global health, and on the efforts to push forward the economic recovery and promoting a more sustainable growth," according to the Italian government.

Just days before the meeting, the International Monetary Fund called on the G-20, which brings together key industrialized and developing economies, to take "urgent" action to beef up vaccine supplies, such as by sharing surplus doses with the developing world and supporting financing to increase vaccine production.

World Trade Organization chief Ngozi Okonjo-Iweala, speaking at a press conference following a side event, said Friday that the G-20 has "done well" in trying to donate vaccines and support manufacturing and distribution, but it needs "to take the lead" in the efforts.

The discussions at the G-20 gathering are also likely to touch on assistance to developing countries facing unsustainable public debt burdens through a newly created framework aiming to offer support beyond a temporary payment relief program launched in May last year.

The so-called common framework for debt restructuring seeks to ensure broad participation of creditors with "fair" burden-sharing, meaning it includes not only the Paris Club of traditional creditor nations but also other G-20 countries such as China, the world's largest official bilateral creditor.

The United States has called on Beijing to increase its participation in the initiatives, criticizing its "highly opaque" lending activity for allowing some Chinese entities to be excluded from debt relief efforts because they are classified as commercial lenders rather than "official" bilateral creditors.

The IMF, meanwhile, said Friday it is making progress to realize by the end of August a $650 billion boost in its reserve assets to help members strengthen their responses to the COVID-19 crisis. The move will be done through the allocation of what is known as Special Drawing Rights, the IMF's own unit of currency.

As additional reserves are distributed depending on each country's financial contributions to the IMF, giving wealthier countries an advantage, leading industrialized countries are considering voluntarily reallocating their SDRs to support more vulnerable countries.

On international tax reform, the participants are likely to express support for a plan to introduce a global minimum corporate tax rate of at least 15 percent and other new rules aimed at tackling tax avoidance by multinational firms, including digital giants.

The plan was announced on July 1 as an agreement of 130 nations and regions, including all G-20 countries, during negotiations coordinated by the Organization for Economic Cooperation and Development. Later, Peru joined in backing the move.

A political endorsement of the agreement will likely add momentum to moves toward finalizing the deal in October.

According to sources familiar with the matter, the G-20 finance chiefs may also decide to press other countries yet to sign on to the plan, such as Hungary and Ireland whose low corporate tax rates have apparently been attractive to companies.

A communique is expected to be released after the talks end on Saturday.

The meeting of G-20 finance chiefs is also usually joined by representatives of international organizations such as the IMF.

Aso and Yellen held talks on the margins of the ministerial meeting on Friday, according to the Japanese Finance Ministry.