UNESCO decided Tuesday to add a group of Jomon Era prehistoric sites in northern Japan, which provide insight into the hunter-gatherer society and the spiritual culture of that period, to its World Cultural Heritage list.

The area comprises 17 ancient sites across the northern main island of Hokkaido and northeastern prefectures of Aomori, Iwate and Akita, representing a rare way of life of prehistoric people in fixed dwellings before the development of agriculture, the World Heritage Committee said. 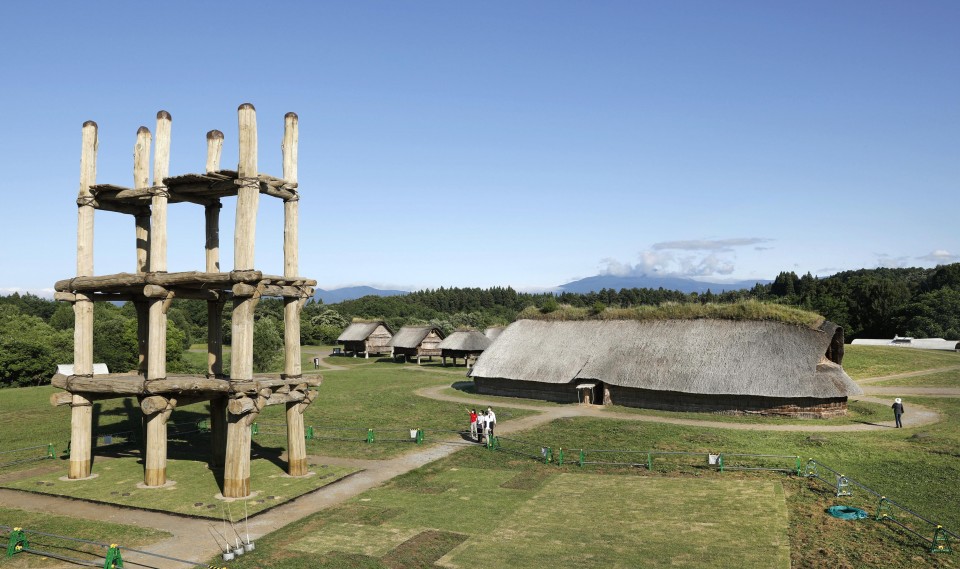 Photo taken on July 3, 2021, shows the Sannai Maruyama Site in Aomori, which was added to UNESCO's World Heritage list as part of the Jomon Prehistoric Sites in Northern Japan. (Kyodo)

The sites also reflect the complex spiritual culture, including rituals and ceremonies the Jomon people developed. They continued this way of life without changing to an agrarian culture for more than 10,000 years.

The committee has said the value of the designated area lies in its biodiversity, with a very high percentage of endemic species, of which many are globally threatened.

The 17 prehistoric sites include two special historic sites of the country -- the Sannai Maruyama Site in Aomori, a large settlement in approximately 3900 to 2200 B.C., and the Oyu stone circles in northern Akita Prefecture dating back to around 2000 to 1500 B.C.

The other 15 sites include the Goshono site in Iwate Prefecture, where burnt animal bones and clay objects believed to have been used for rituals were unearthed, as well as the Ofune site in Hakodate, Hokkaido, where remains of pit dwellings and a large number of relics were excavated.

Those 15 sites are designated as historical sites of the country.

In May, an advisory panel to the U.N. Educational, Scientific and Cultural Organization recommended the prehistoric sites in northern Japan be added to the World Heritage list, as it assessed that the ruins provide material evidence of long-term stable settlements based on hunter-gatherer lifestyles with abundant food resources.

This year's World Heritage Committee session through Saturday will evaluate candidate sites for 2020 and 2021 as the registration of candidate sites last year was delayed for a year due to the coronavirus pandemic.