Prime Minister Yoshihide Suga and French President Emmanuel Macron agreed Saturday that Japan will pass on its experience of hosting a "safe and secure" Olympics -- being held in the midst of the COVID-19 pandemic -- to France, host of the 2024 Summer Games.

In a joint statement released after their meeting in Tokyo, Suga and Macron also affirmed deeper security cooperation as part of efforts to realize a free and open Indo-Pacific in the face of China's military buildup and assertive territorial claims in the region.

The leaders celebrated the opening of the Summer Games in the Japanese capital, calling the Tokyo Olympics and Paralympics "a symbol of world unity in defeating the novel coronavirus." 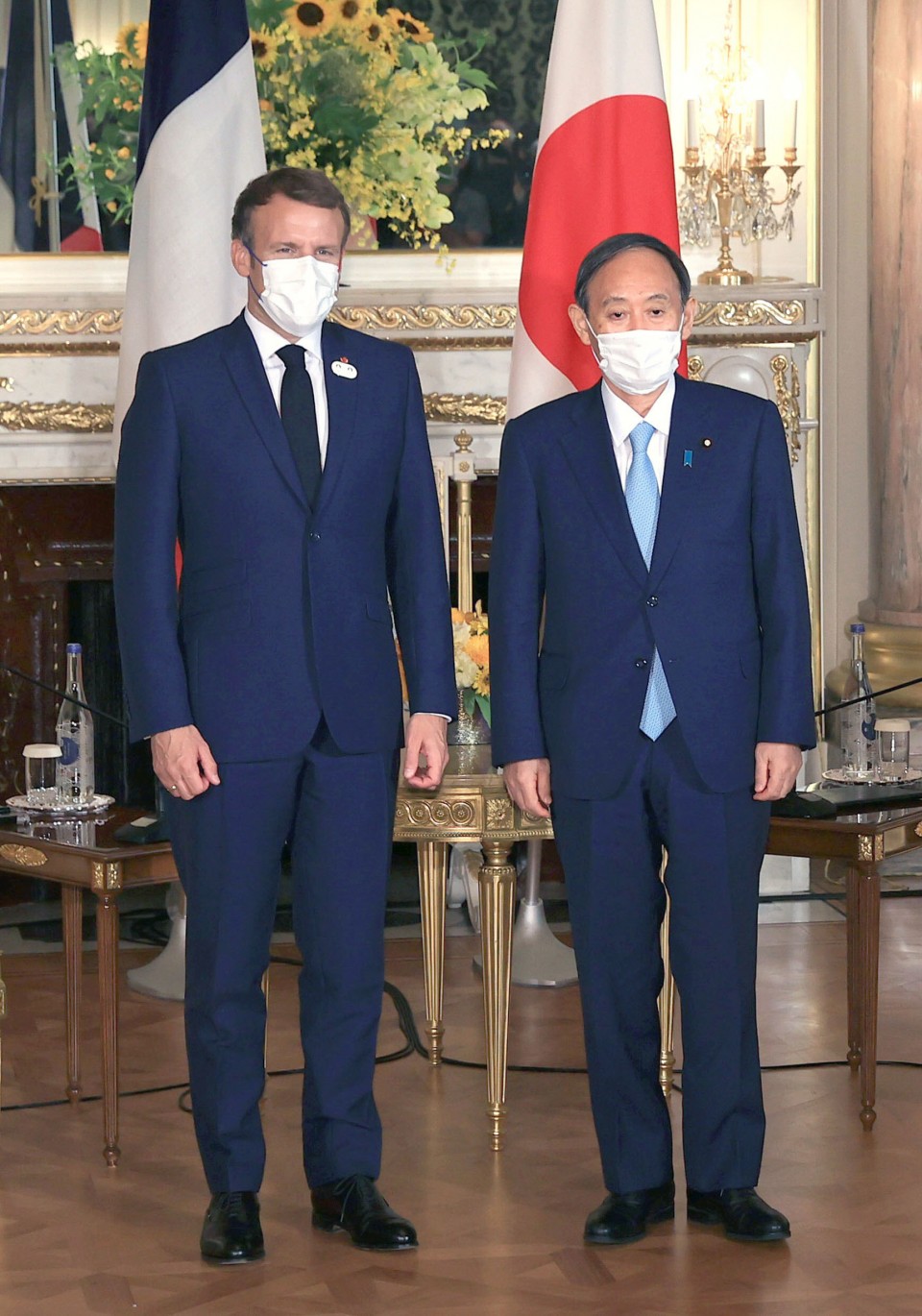 They agreed to share the Tokyo Games' themes such as harmonious coexistence, sustainability and accessibility with the organizing committee of the Paris Games, according to the statement.

The meeting, which was followed by a luncheon, came a day after Macron attended the opening ceremony of the Tokyo event, delayed for a year due to the pandemic.

Macron was the only head of state from the Group of Seven industrialized nations, including Britain, Canada, Germany, Italy, and the United States plus the European Union, to travel to Japan for the spectacle.

In the meeting, Suga and Macron affirmed close defense cooperation in a veiled counter to China, as France has been increasing its involvement in multinational military drills in the East China Sea and other parts of the Indo-Pacific.

France shares a common interest with Japan, the United States and other democracies in ensuring regional peace and stability as Paris has a number of island territories in the Indian and Pacific oceans.

In May, the Self-Defense Forces held a joint exercise with the United States, Australia and France in southwestern Japan in an effort to boost the capability of defending remote islands, with the Senkaku Islands, a group of East China Sea islets controlled by Japan but claimed by China, in sight.

It marked the first time that Japan, the United States, Australia and France have conducted drills in the East China Sea, according to the Maritime Self-Defense Force.

Suga and Macron also underscored the need to take effective and swift action in ensuring equitable access to COVID-19 vaccines globally, according to the statement.

They pledged to continue cooperation in fighting global warming in the run-up to U.N. climate change talks slated for Oct. 31 to Nov. 12 in Glasgow, Scotland.

Suga and Macron also agreed the Japanese and French governments will commit to stepping up dialogue about ways to realize the best interest of children when their parents are separated, an issue highlighted by Vincent Fichot, a 39-year-old French national who says his Japanese wife ran off with his two children.

Fichot made headlines for going on a hunger strike near the Olympic stadium in Tokyo to bring attention to Japanese law that does not allow for joint custody when parents separate.

Saturday's meeting came after the leaders met on the sidelines of the G-7 summit in June in Britain, at which Macron promised to attend the Olympics' opening in Tokyo despite the COVID-19 pandemic.

Gist of joint statement by Japan and France

-- agree Tokyo will pass on experience of holding "safe and secure" Olympics to Paris for the 2024 Summer Games.

-- will deepen cooperation in realizing a free and open Indo-Pacific based on rule of law.

-- affirm commitment to stepping up dialogue about ways to realize best interest of children when their parents are separated.