After postponement and seemingly endless problems, the Tokyo Olympic cauldron was finally lit Friday night in a nearly empty National Stadium, marking the start of a games being held under unprecedented circumstances during the coronavirus pandemic and with public opinion still split. 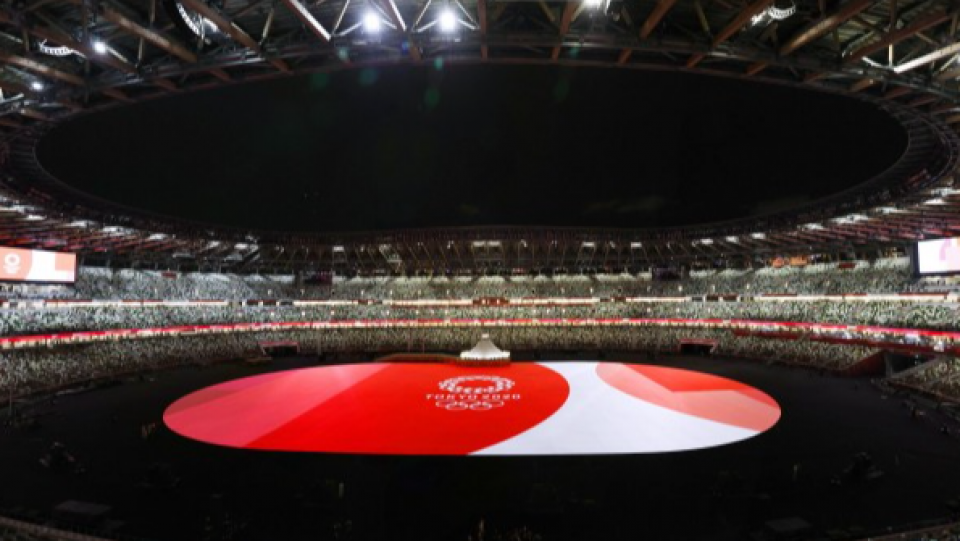 Photo taken July 23, 2021, shows the National Stadium, just ahead of the opening ceremony of the Tokyo Olympics. (Kyodo)==Kyodo

Japanese tennis sensation Naomi Osaka was given the honor of lighting a hydrogen-fueled Olympic cauldron that opened from a sphere sitting atop a Mt. Fuji-like pedestal. Orange, yellow and green fireworks lit up the sky above the stadium to announce to all the games have begun.

Although organizers hope the Olympics will symbolize global solidarity and victory over COVID-19, the games will be staged with the host city seemingly losing the fight. Tokyo has been wrestling with COVID-19 infection numbers at their highest in six months with the city under its fourth state of emergency.

Emperor Naruhito declared the games of the 32nd Olympiad open, but he did not use the Japanese word for "celebrate," often chosen in past Olympic opening ceremonies, in what appears to be a decision made in consideration for those suffering during the health crisis. 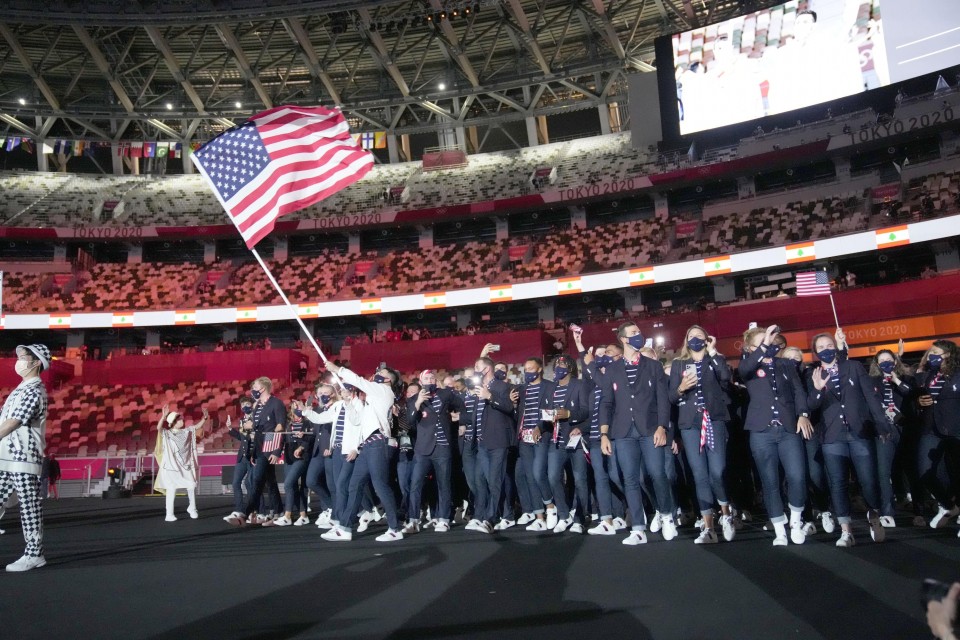 The U.S. delegation marches during the opening ceremony of the Tokyo Olympics at the National Stadium on July 23, 2021, in Tokyo. (Kyodo) ==Kyodo 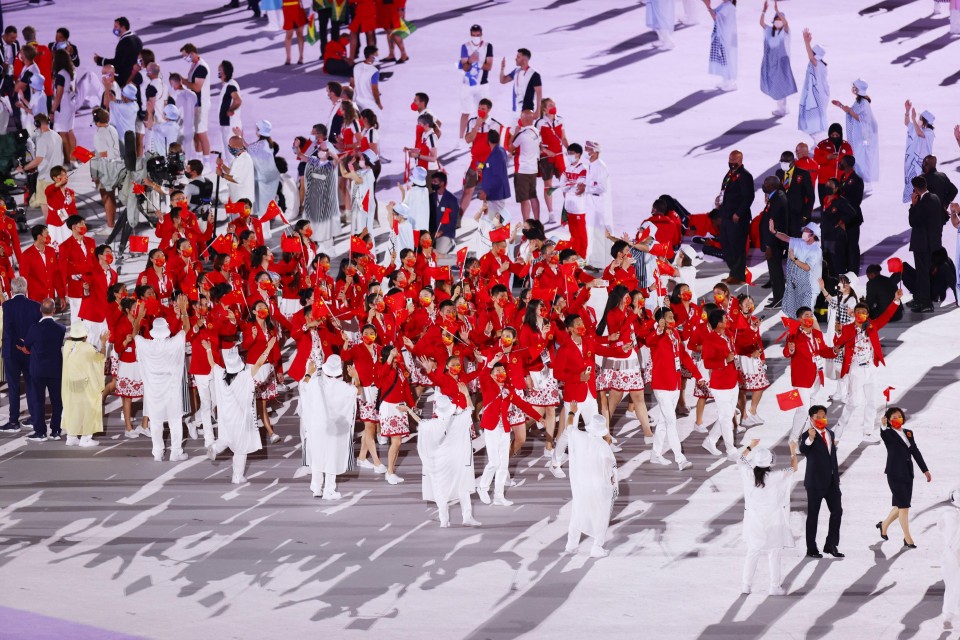 China's delegation marches during the opening ceremony of the Tokyo Olympics at the National Stadium on July 23, 2021, in Tokyo. (Kyodo) ==Kyodo 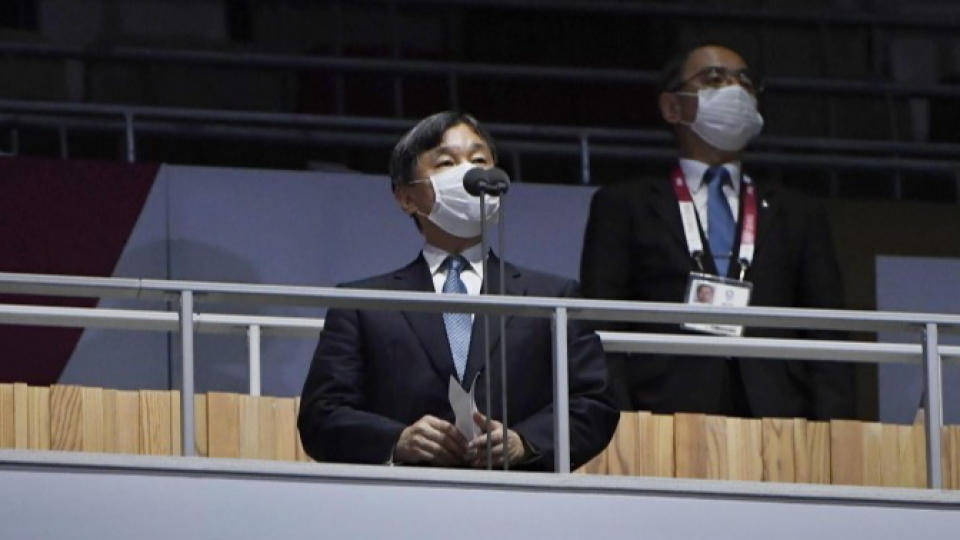 In his speech, International Olympic Committee President Thomas Bach said the pandemic has created distance between humanity, and separated people from their loved ones. "But today, wherever in the world you may be, we are united in sharing this moment together. The Olympic flame makes this light shine brighter for all of us," he said.

To the sound of orchestral versions of popular Japanese video game tunes, including from the title "Dragon Quest," some 6,000 mask-wearing athletes and team officials paraded into the ceremony held in the 62,000-capacity stadium.

In an order determined by the countries' Japanese-language name, most delegations were led by a male and female flagbearer for the first time after the IOC changed its rules last year in a push for equal gender representation.

The 17-day Olympics through Aug. 8 will begin after numerous scandals and missteps, including the dismissal Thursday of a ceremony director over a past joke he made making light of the Holocaust.

The opening extravaganza featured Japanese tradition, highlighting fine craftsmanship with modern culture, while also including a moment of silence to remember those who died in the pandemic. It showcased athletes who have trained for the Olympics throughout the difficult period.

In front of about 900 VIPs such as IOC officials and foreign dignitaries, basketball star Rui Hachimura and wrestling medal hope Yui Susaki carried the Japanese Hinomaru flag in the athletes' parade.

The theme of "United by Emotion" played out in a rendition of the iconic song "Imagine," co-written by John Lennon and Yoko Ono half a century ago. The song was performed via video by various singers, including American John Legend and Spanish multi-Grammy winner Alejandro Sanz.

Meant as a powerful message to the world at a time of uncertainty, Tokyo hoped the song would inspire viewers to unite around the sporting spectacle.

Seiko Hashimoto, president of the organizing committee, thanked all the athletes for coming to Tokyo, saying, "Hopes have been connected one by one by many hands, and we are now in a position to welcome this day."

But vocal protests were held outside of the stadium, with many holding posters in Japanese that read "Cancel the Olympics" or "We don't need the Olympics," signaling just how divided the public remains. 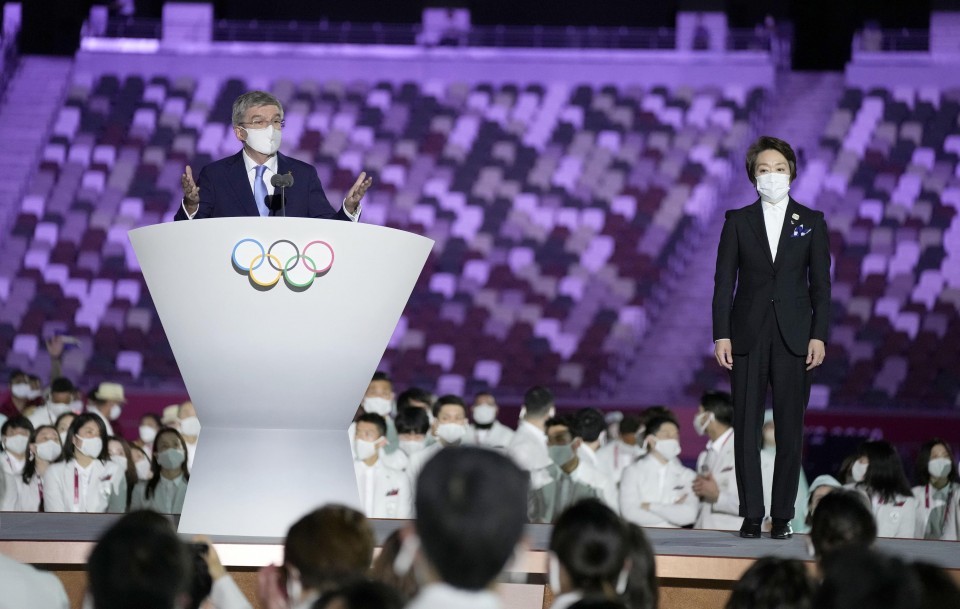 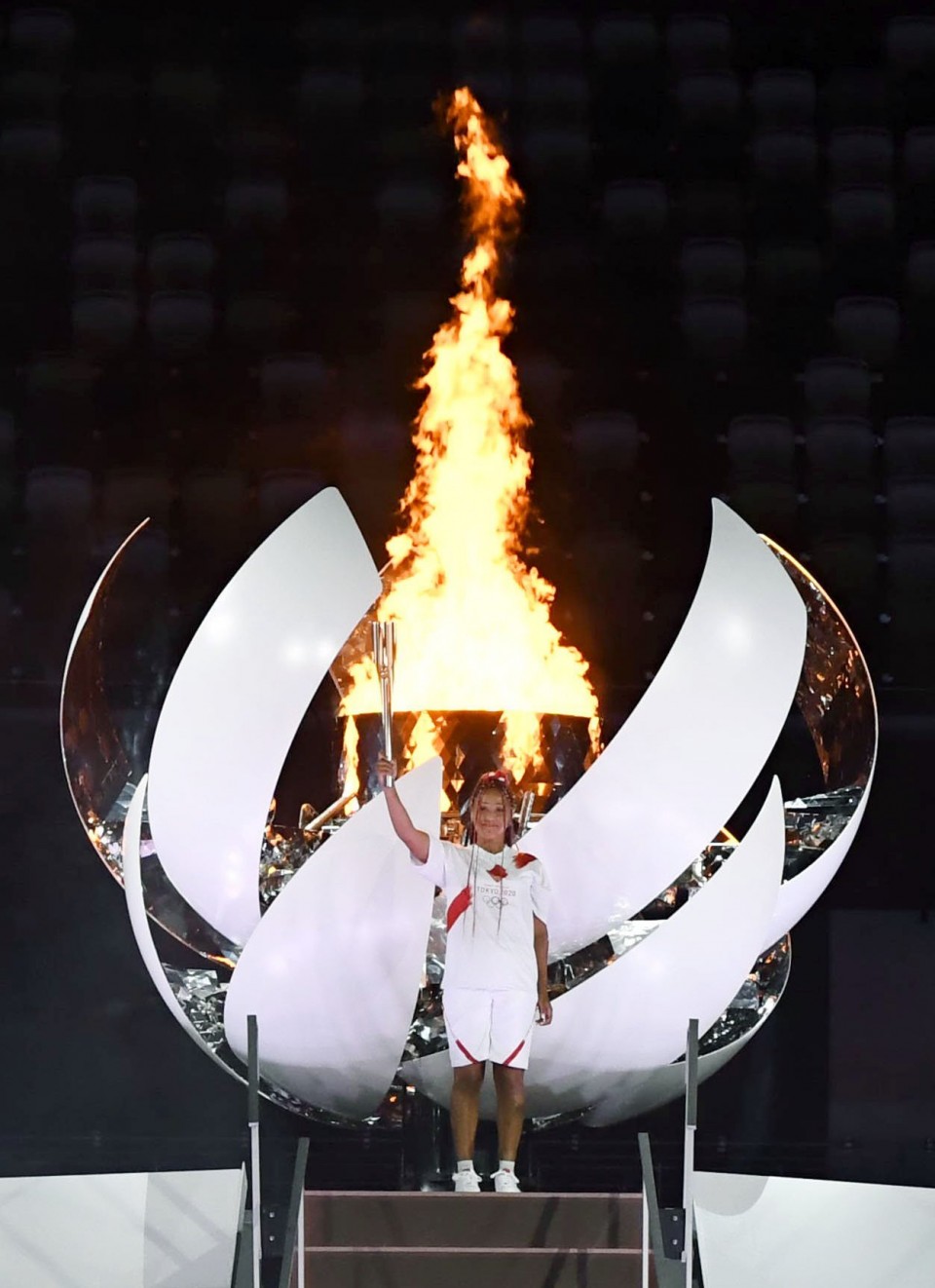 Tennis player Naomi Osaka is pictured after lighting the Olympic cauldron during the opening ceremony of the Tokyo Olympics at the National Stadium in Tokyo on July 23, 2021. (Kyodo) ==Kyodo

Amid renewed worries that the Olympics and Paralympics could turn into a super-spreader event that heaps strain on the medical system, there are questions about whether anti-COVID-19 rules will be fully observed throughout the event.

Already COVID-19 cases have been detected almost every day since the start of July among athletes and staff, while the impact of Japan's extreme heat also remains a concern with temperatures for the first days of the games forecast to regularly top 30 C.

Japan's roughly 863,000 reported cases of the virus, with 15,000 deaths, are relatively low compared with many other countries, but public concern remains strong.

Tokyo, home to more than 10 percent of the country's population of around 125 million, has seen another wave of infections at a time when many Japanese remain unvaccinated. The capital reported 1,359 infections on Friday, a day after logging 1,979 cases, the highest since mid-January.

The Tokyo Games, the second in the capital following the 1964 edition, will feature a record 33 sports comprised of 339 events that will take place at 42 venues. Karate, a martial art that originated in Okinawa, will make its Olympic debut along with surfing, skateboarding and sport climbing.

Choosing "Unity in Diversity" as one of its themes, the Olympics will have nearly an equal ratio of male and female athletes in what the IOC says will become the most gender-balanced games in history. The Refugee Olympic Team is about three times larger than the first-ever contingent that competed at the 2016 Rio de Janeiro Games.

Russian athletes will participate under a neutral flag as a result of their country's state-sponsored doping scheme, while North Korea has not sent any athletes due to the pandemic.

Prime Minister Yoshihide Suga, whose public approval ratings have fallen as a consequence of his perceived poor handling of the pandemic, will find it difficult to pursue active diplomacy during the Olympics because very few foreign leaders have decided to visit Japan.

Since the historic decision was made in March 2020 to push back the Olympics, the organizers and the government have repeatedly pledged to host a "safe and secure" games.

Japan won the bid to host the Olympics eight years ago, saying it wants to showcase the northeastern region's reconstruction from the catastrophic earthquake, tsunami and nuclear disaster in 2011 and express its appreciation to the rest of the world for the support given during those difficult times.

The cost of hosting the Olympics and Paralympics has drastically increased from 734 billion yen ($6.64 billion) at the time of the bid to 1.64 trillion yen noted in the most recent budget report in December 2020.