The security forces were apparently trying to search the premises of pro-democracy forces that oppose the military, but they withdrew once they learned the occupants were Japanese, the source said. The occupants were not harmed. 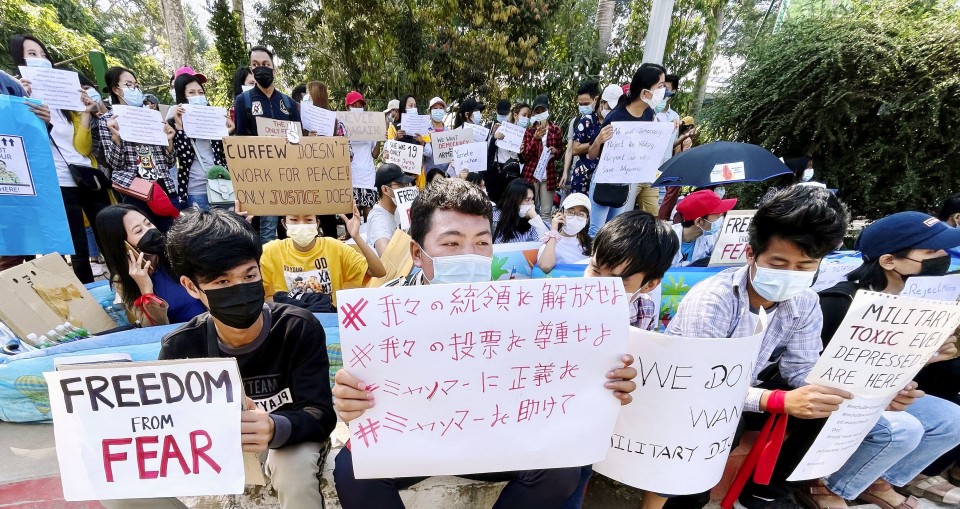 People protest near the Japanese Embassy in Yangon, Myanmar, on Feb. 10, 2021, against the military that has detained Aung San Suu Kyi and other government leaders since it staged a coup on Feb. 1. (Kyodo) ==Kyodo

The Japanese Embassy in Yangon lodged a protest with Myanmar authorities, citing a violation of the Vienna Convention on Diplomatic Relations, which stipulates the protection of diplomats from arrest or detention, and inviolability of mission premises.

No similar incident has since occurred, according to the source.

The source said members of the security forces forcibly entered a housing complex where many foreigners live on the night of April 17.

The armed personnel proceeded into the entrance of a Japanese diplomat's unit. In the case of a Japan International Cooperation Agency member, they forced their way into the person's living room.

The incident occurred at a time when many pro-democracy activists were detained. On April 18, Yangon-based Japanese freelance journalist Yuki Kitazumi was arrested in the city. Kitazumi later returned to Japan after being released from a prison where many political prisoners have been kept.

Since the military seized power in a coup in February, ousting the elected government of leader Aung San Suu Kyi, 890 people have been killed in military crackdowns in Myanmar, according to the Assistance Association for Political Prisoners, a rights group tracking deaths and detainees in the Southeast Asian country.