Japan will allow Myanmar residents to extend their stay for an additional six months as an emergency measure due to the unrest following the Feb. 1 military coup in the Southeast Asian country, Justice Minister Yoko Kamikawa said Friday.

Those who wish to stay longer in Japan will be allowed to work as well, and the emergency measure can be extended again if the situation in Myanmar does not improve, the immigration authorities said.

According to the Immigration Services Agency of Japan, 35,049 individuals from Myanmar resided in Japan as of the end of last year, and 13,963 of them, the largest group, were technical interns under the government-sponsored program. 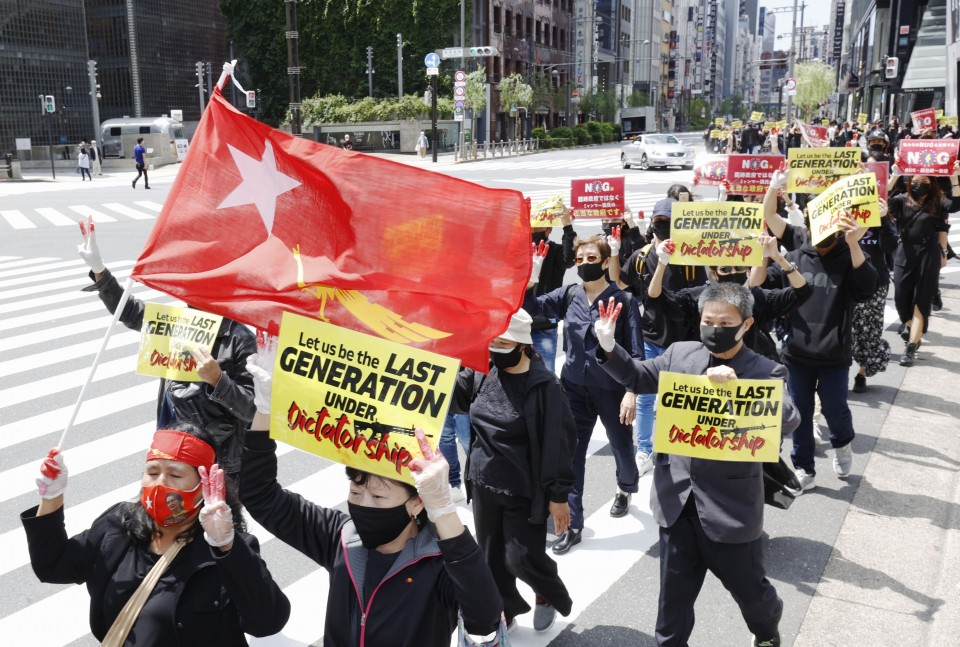 Myanmar residents in Japan stage an anti-coup rally in Tokyo's Ginza area on May 2, 2021, urging their host country to recognize the National Unity Government, an organization set up in opposition to the Feb. 1 military coup, as Myanmar's legitimate governing body. (Kyodo) ==Kyodo

"We will flexibly respond to the situation by fully taking into consideration the circumstances of individual foreign residents," Kamikawa told a press conference.

For the time being, the agency will allow Myanmar residents who wish to extend their stay to switch their status to foreigners who are allowed to engage in "designated activities," a status that is given based on individual circumstances.

The extension period will be six months, but for those aiming to obtain the status of "specified skilled workers," established in April 2019 to expand employment opportunities for blue-collar foreign workers, the period will be one year.

The emergency measure will also cover people from Myanmar seeking refugee status in Japan, who as of the end of March numbered 2,944.

The government aims to expedite the screening process and is set to permit such asylum seekers, including many who are already overstaying, to remain in Japan temporarily even if their applications are turned down.

"It is good news. We can't go back now because it is dangerous," said a 44-year-old Myanmar woman who lives in Tokyo.

"I hope (the government) will give me refugee status instead of a permit with time restrictions," said the woman, who is waiting for her third refugee status application to be granted.

She pointed out that Japan seems to be following other countries that have already implemented similar relief measures.

The United States has reportedly provided a temporary protected status for Myanmar nationals so that they are shielded from deportation and can obtain work permits.

The Australian government announced visa extensions for Myanmar nationals living in the country until it becomes safe for them to return.

Japan is also arranging to allow two Myanmar diplomats in Tokyo, who were dismissed by the military junta for joining the anti-coup movement, to remain in Japan.

One of the diplomats' credentials, issued by the Japanese Foreign Ministry, expires on July 15.

Foreign Minister Toshimitsu Motegi has recently said that Japan has not revoked their visa status, as the ministry does "not perceive their actions as having been inappropriate."

Earlier this month, the government withdrew a bill revising rules on accommodating foreigners facing deportation, which could worsen asylum seekers' conditions amid criticism over the alleged improper treatment of a Sri Lankan woman who died while being held at an immigration facility.

Japan has been criticized for accepting very few refugees, only around 1 percent of annual applications received, according to Justice Ministry data.