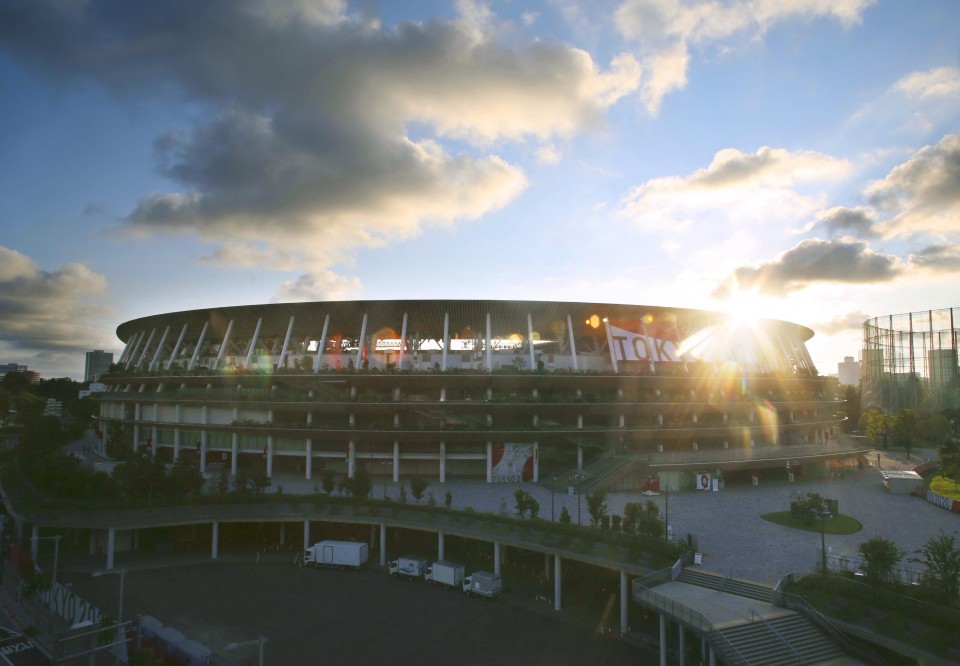 National Stadium in Tokyo is pictured in the morning of July 23, 2021. The opening ceremony of the Tokyo Olympics is set to take place there later in the day. (Kyodo) ==Kyodo

TOKYO - After postponement and seemingly endless problems, the Tokyo Olympics finally began Friday night in a nearly empty National Stadium when the emperor declared open the games being held amid unprecedented challenges posed by the coronavirus pandemic.

TOKYO - Tennis sensation Naomi Osaka lit the cauldron for the Tokyo Olympics at the National Stadium on Friday, closing out a 121-day, 2,000-kilometer torch relay that was partly taken off public roads due to COVID-19 concerns.

Born in Japan to a Haitian father and a Japanese mother and raised in the United States, 23-year-old four-time grand slam winner has become a leading voice for racial and gender equality despite a reluctance to enter the spotlight.

TOKYO - Emperor Naruhito told U.S. first lady Jill Biden, French President Emmanuel Macron and other world leaders Friday that he has the "deepest respect" for all of the athletes who have gathered in Japan for the Olympics despite the challenge posed by the coronavirus pandemic.

"It is my hope that the athletes will be able to give their best performance in good health fending off COVID-19 and mindful of the hot weather," the emperor said in a meeting with 12 foreign dignitaries from 11 countries at the Imperial Palace in Tokyo.

TOKYO - The Tokyo metropolitan government reported 1,359 daily coronavirus cases Friday amid public concern that infections could hit record highs during the Olympics, set to open in the capital later in the day.

The latest figure represents an increase of 88 from Friday last week, bringing the seven-day rolling average of cases to 1,386 per day, up 46.5 percent from the previous week. Tokyo is currently under a fourth COVID-19 state of emergency until Aug. 22.

BEIJING - Chinese President Xi Jinping made an inspection tour of Tibet for two days earlier this week, state-run media reported Friday, in his first trip to the autonomous region since he took power in 2012.

Xi visited places in the capital Lhasa, such as the Potala Palace square, the official Xinhua News Agency said. The palace is a World Heritage site known as the former official residence of the Dalai Lama, the spiritual leader of Tibetan Buddhism.

HONG KONG - Hong Kong police have arrested five people over children's picture books that dealt with the 2019 pro-democracy protests and other events, alleging they were published with the intent to "incite young people's hatred" toward the Hong Kong government, according to local media.

Two men and three women, aged 25 to 28, are accused of publishing "seditious" material after depicting Hong Kong people as sheep, and people from mainland China or authorities as wolves in three picture books that were published between June last year and this March.

DANDONG, China - Diplomats and their families in North Korea left Pyongyang by land and arrived in China's border city of Dandong, in a scene witnessed by Kyodo News on Friday.

As a border blockage following the novel coronavirus pandemic has prevented North Korea from importing daily necessities, the around 30 Southeast Asians and Europeans who crossed into China appeared to have faced difficulties in maintaining their livelihood in Pyongyang.

SYDNEY - The Great Barrier Reef will not be listed as "in danger" following an online meeting of UNESCO World Heritage Committee members hosted by China on Friday.

Consideration of the reef's status will be delayed until 2022, after several member nations backed Australia's request to amend a draft recommendation, put forward last month, that proposed the site be listed as "in danger" due to the negative impacts of climate change on the world's biggest coral reef system.