Ever since Japan won the right to host the Olympics, Yukari Shimizu, who grows flowers in a Fukushima town that was once entirely off-limits due to the serious nuclear accident that befell the region, has been determined to seize the golden opportunity.

Even as the coronavirus pandemic has caused doubts over whether the Tokyo Games will begin in less than three months' time, Shimizu has been growing thousands of lisianthuses in her hometown of Namie, hoping that her flowers will bring joy to Olympic and Paralympic medalists. 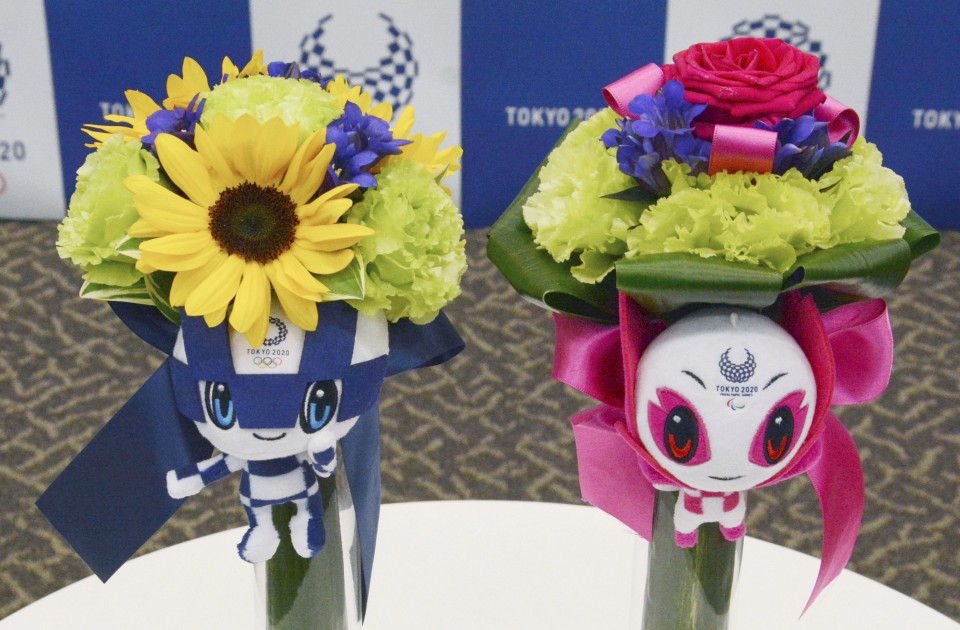 Photo taken in Tokyo on Nov. 12, 2019, shows the bouquet designs for medalists at the Tokyo Olympics and Paralympics. (Kyodo)

During the medal ceremonies, athletes will receive a "victory bouquet," a commemorative gift that features colorful flowers from Fukushima, Miyagi and Iwate -- the three northeastern prefectures that were hit the hardest by March 2011 earthquake, tsunami and nuclear disaster.

"Even though I am not sure what will happen with the Olympics because of the coronavirus, I hope there is a chance for athletes to enjoy the flowers," said Shimizu, who heads a nonprofit organization called "Jin" that grows flowers in 20 greenhouses.

"I want the flowers to send a message that it is possible to overcome hardships, both in sports and in life."

Up to mid-May, the organization will plant about 15,000 seedlings that will produce the light green flowers, with the idea that some will be used during the Olympics that will open on July 23, one year later than originally planned.

The flowers represent hardships that have been overcome after the March 11 incident 10 years ago -- a magnitude-9.0 earthquake that set off tsunami and triggered the world's worst nuclear disaster since the 1986 Chernobyl crisis.

The victory bouquets will each have an Olympic or Paralympic mascot attached and feature sunflowers or roses from Miyagi, gentians from Iwate and lisianthuses from Fukushima.

"The bouquet is very vibrant in color and I'm glad that it uses flowers from all three prefectures, not just one," she said. "The flowers symbolize gratitude to the people from overseas who helped us with reconstruction."

Tsunami, some as high as 15 meters, engulfed the coastal area of Namie, sweeping some 600 houses away and leaving more than 180 people dead or missing.

The town's entire population of more than 21,000 people had to evacuate due to the proximity of the Fukushima Daiichi nuclear plant, which suffered meltdowns and released huge amounts of radioactive material. 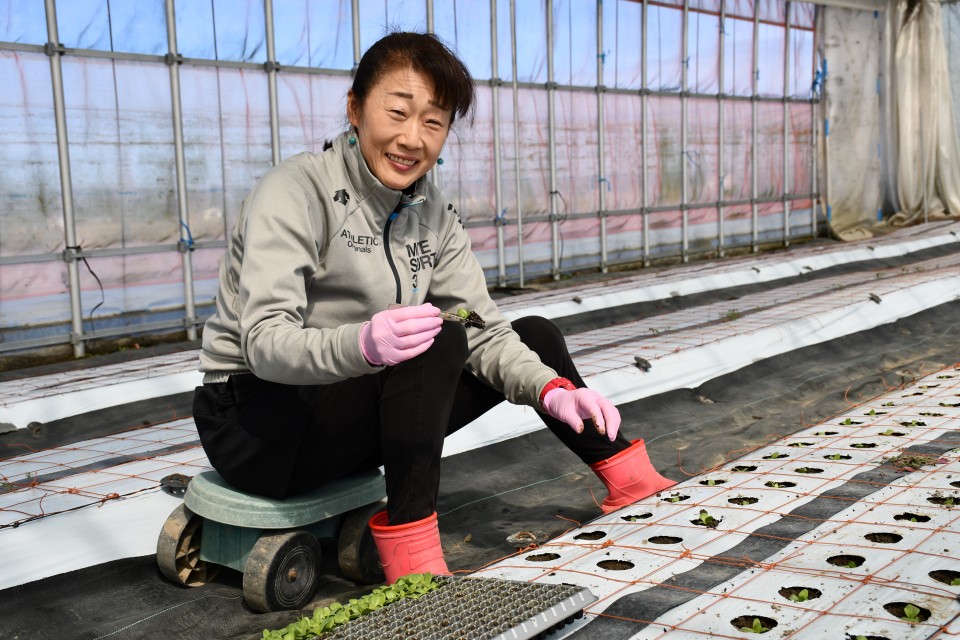 Shimizu's group started planting flowers in 2014, about a year after people were allowed to visit Namie during the day.

The flower growers originally worked on a vegetable farm in the town in 2013, but the products harvested that summer showed radiation levels that exceeded Japan's maximum standards. So they decided to pin their hopes on flowers instead.

Watching Tokyo's campaign to win the bid for the 2020 Summer Games in 2013, just about the time the vegetables tested above acceptable radiation levels, Shimizu made up her mind to play a role in the Olympics.

During his final presentation to the International Olympic Committee in September that year, then Prime Minister Shinzo Abe said, "The situation is under control," when referring to the problem of leakage of radioactive water at the Fukushima plant.

"I felt like the (reality of) Fukushima situation was hidden so Japan can host the Olympics," Shimizu said. "So since then, I have always wanted to make the most of the Olympics by being part of it in one way or another."

The Olympics this year, however, will look completely different from the typical games due to the spread of the coronavirus.

There will be no spectators from overseas in venues, and athletes will be required to remain in their bubble to protect them and the wider Japanese community from the spread of infections.

While the Japan and Tokyo governments remain adamant the games can be held safely, the majority of the Japanese public is against staging them this summer.

As the pandemic continues to rage, questions remain over what will happen in a couple of months.

"I want the Olympics to be held safely, but to be honest, I am just not sure, given the current situation," Shimizu said. "But I hope there is a chance to introduce to the world how much Fukushima has recovered through the flowers." 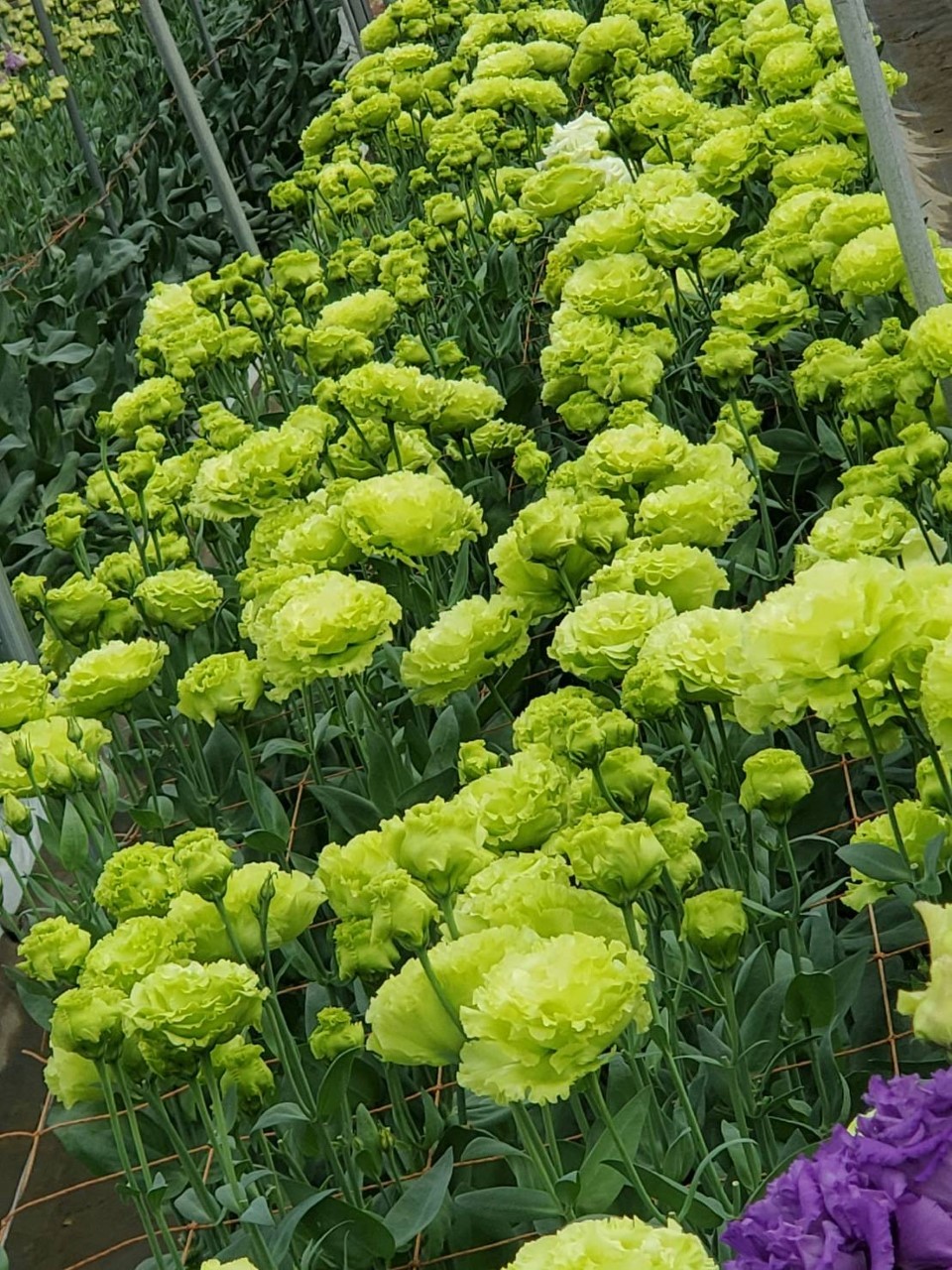 Taketo Chikami, who works at a flower store in the nearby city of Nihonmatsu, said the lisianthuses grown by Shimizu's group are popular among his customers, who are often surprised how long the flowers last in a vase.

"I think the group has been really improving the quality of the flowers through trial and error. The members have been really studying hard," he said. "Not all flower growers have done that."

While her group was the first to start growing them after the nuclear accident, there are now six other farmers doing the same in Namie, which seeks to make itself known as a flower town rather than a place linked forever to the disaster.

In 2017, the Japanese government lifted the evacuation order in some areas in Namie that were less severely contaminated, allowing people to live in the town again. There were just over 1,600 residents as of the end of March.

Shunya Suzuki, a Namie official, said the town has started to earn recognition for its flowers. The town government has a website introducing flower growers and their work, and also provides financial aid to people who want to start farming in Namie, provided they meet certain requirements.

"Right now, people outside Fukushima have an image that Namie is a town that suffered devastation. But I hope people will be reminded of the flowers we produce when they hear the name Namie," he said.

Shimizu said growing flowers has broadened her horizons and now she is committed to helping new farmers succeed and bloom in their own right.

"There are more and more people who want to revive our hometown through flowers and prevent it from going to ruin. I want the Olympics to shed light on that," she said.